Sebastian Vettel Was Very Complimentary Of Alonso On His 40th Birthday

We didn’t expect Fernando Alonso’s 40th birthday to hit us in the feels quite how it has done, but because of what Sebastian Vettel said about him in today’s press conference, we now feel all warm and fuzzy 🥰

Seb was absolutely lovely when it came to making his day special! He spoke about how happy he was that Fernando was back in F1 this year and that they were able to race each other on track.

“The first race that Fernando was back this year, we had some wheel to wheel, and I was actually smiling in the cockpit because I’d been looking forward to more of it this year,” Seb confessed.

It’s just so nice! Seb and Fernando have had some legendary battles with each other in F1. They fought until the final race of the year for the title in 2012, with Seb eventually winning that one. It always seems like they respect each other so much that it makes them want to beat the other even more.

But that doesn’t stop them from getting on very well off-track. At the start of the press conference, when Fernando was being wished a happy birthday, Seb got out a party popper and tried to fire it over Fernando, but he got confused and fired it straight down onto the floor, basically just making a mess. It was brilliant!

Seb couldn't quite get the party started during his press conference with @alo_oficial 🎉😭#HungarianGP 🇭🇺 #F1 pic.twitter.com/9fnHLEL2jj

Seb continued the Fernando love in with some very high praise speaking about his first win in the sport 18 years ago at the Hungaroring:

“He won here in 2003, I was in front of the TV, and I remember when he won. I think his talent is, without doubt, the skills on track one of the biggest that the sport has seen.

“He’s done something which I thought was impossible to do, which is beating Michael [Schumacher] because when I grew up, it was like, Michael is the number one and impossible to beat, and Fernando started beating him. I think that’s an achievement, and obviously, he’s had such a long career, so many different cars, so I consider it a pleasure to race beside him and fight him on the track.” 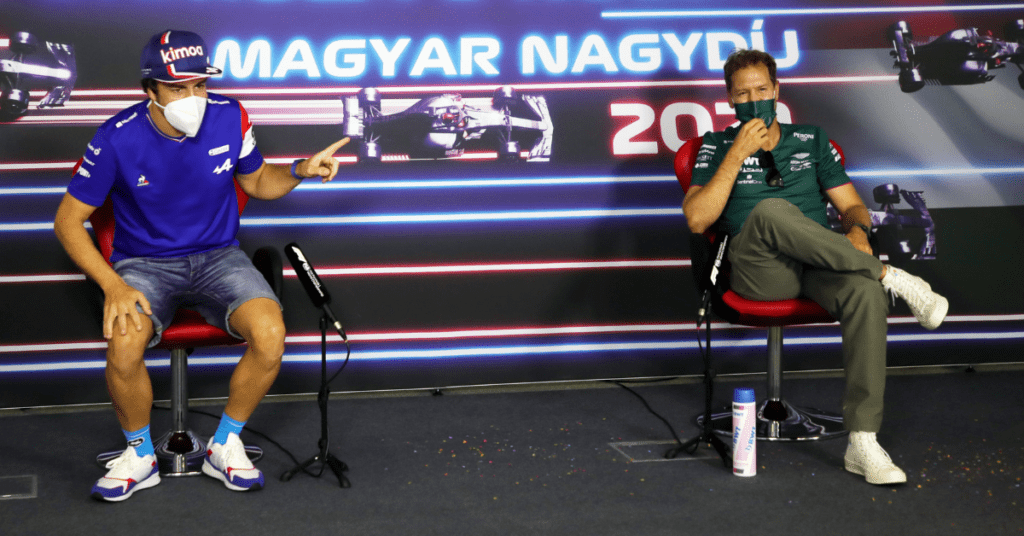