Singapore 2017: The Race That Swung The Title Fight Hamilton’s Way

It’s an almost iconic moment now, a spectacular collision under the lights that many see as the defining moment in the 2017 championship that ultimately left Sebastian Vettel with too much ground to make up in the races that followed. It was also a race that Mercedes wasn’t expecting much from, leaving Vettel and Ferrari with a great chance to capitalise.

The 2017 race was shaping up as expected after qualifying. Vettel on pole with Max Verstappen sharing the front-row. Daniel Ricciardo was third on the grid with Kimi Raikkonen fourth, followed by Lewis Hamilton and Valtteri Bottas on the third-row. If Mercedes has a bogey track, Marina Bay is it. It’s also a circuit at which Red Bull either win, or punch above their weight. The coming together before the first corner undoubtedly changed the shape of the race and gifted Lewis Hamilton the opportunity to gain 25 points on his retired opponent, which he duly executed.

Prior to the 2017 Singapore Grand Prix, the conversation in the media orbited around to what degree the momentum in the title fight had shifted. Following the previous round in Italy, Hamilton had taken the title lead for the first time in the season, with a three-point advantage over long-term leader Vettel.

The reason last year’s race is now framed as the turning point is because the shadow of momentum that Hamilton had built through gaining the lead at Monza was fully realised under the lights of Marina Bay. Both Vettel and Hamilton had experienced a fairly equal share of misfortune up until this point too, with essentially three blemishes on their 2017 records apiece.

Hamilton had suffered in-race penalties in Bahrain and Austria and a loose headrest had denied him a possible victory in Azerbaijan, and he had to settle for fifth as a result. For Vettel, a moment of madness around the streets of Baku marked both a collision and an in-race penalty. This was his first major error, the following mistake before Singapore was one in which he was a passenger as dramatic punctures spoiled Ferrari’s British Grand Prix.

On paper, history is repeated going into this upcoming weekend, with both Hamilton and Vettel equal in that both have retired only once this season. It could be argued that Vettel has made a few more mistakes, the lock-up against Bottas in Baku, the lap one mess at Paul Ricard, the over-zealousness in Monza – all small moments that could define a championship. But there have also been small imperfections regarding Hamilton too, the very close pit-call at the German Grand Prix could have easily resulted in a botched strategy, for example.

This time, there’s a sense that whoever keeps the cleanest nose will win in Singapore. It was a race of attrition last season with only twelve cars meeting the checkered flag, a 25-point swing either way will have massive ramifications for the title fight. If it’s a Hamilton/Vettel one-two either way, the title tension will likely make it to Abu Dhabi. As the start lights fizzle out one by one in the moments before the race start, who would deny that the events from 12 months ago won’t be playing through the minds of each respective team? 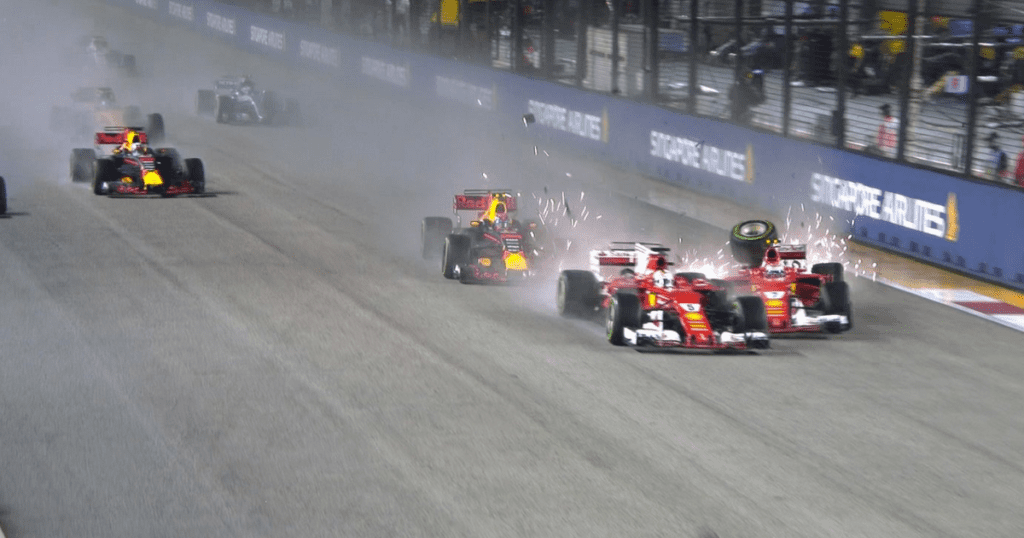