The 2019 World Rallycross season has quite a different look to past years. None of the previous champions is competing, the roster of teams and drivers looks different, and the season kicked-off at a new venue – the Yas Marina circuit in Abu Dhabi. However, despite all the changes, the event was filled with all the sort of action that we’ve come to expect from World RX – and then some.

Two of the favourites for victory were wiped out in Q3 with this massive crash between Timmy Hansen and Andreas Bakkerud. Hansen was merging from the joker lap as Bakkerud – who mistakenly thought it was the final lap – kept the throttle pinned in the hope of reaching the finish line, only for this to happen.

Here's the huge impact between @timmy_hansen and @andreasbakkerud that put the Swede out of #AbuDhabiRX. We are pleased to report that both drivers are OK.

Although Hansen finished the race, his car was far too damaged to compete in the rest of the event, and while Bakkerud managed to get back out for Q4 and qualify for the semi-finals he was disqualified from Q3 for causing the collision.

In the first semi-final there was another spectacular incident, this time courtesy of the enormous sausage kerbs. Reinis Nitiss launched his Hyundai i20 into the air and landed on the roof of Anton Marklund’s Renault Megane.

That left a line-up in the final of Kevin Hansen, Niclas Gronholm, Liam Doran, Krisztian Szabo, Janis Baumanis and Timo Scheider – none of whom had ever won a World RX round and only Scheider had stood on a podium.

The race quickly became a fight between Hansen and Gronholm. And despite Gronholm looking like the quicker driver, he couldn’t find a way past – at least, not without a bit of a tap.

Gronholm may have taken victory on the road but after the event was given a three-second penalty, dropping him to second and handing Hansen the win, with Liam Doran third. Funnily enough, that makes it two years in a row that the winner of the first race has been decided in the stewards’ room… 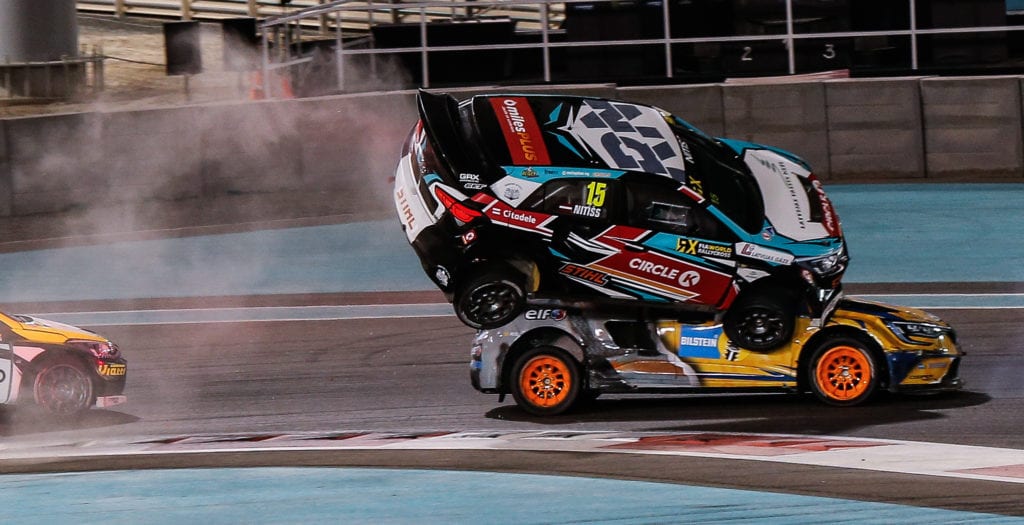