Qualifying for the Italian Grand Prix was looking set to be a lengthy affair as rain set in over Monza for much of Saturday. The session started on time but was then red-flagged for more than two-and-a-half hours after Romain Grosjean binned it on the pit straight.

The drivers found ways to entertain themselves during the delay and when the session finally got underway again it proved to be worth the wait.

Conditions remained tricky, with drivers unsure whether intermediate or full wet tyres were the best option, but when the rain came down again in Q3 the decision became obvious.

Lewis Hamilton looked pretty much peerless the whole time and managed to steal pole with a lap of 1:35.554 in the dying seconds – some 1.1 seconds faster than second-placed Max Verstappen. That makes it 69 career pole positions for the Brit and puts him as the all-time record holder.

Hamilton didn’t have it all his own way though as a couple of youngsters put in some stunning performances. Esteban Ocon looked like he was pole position at one point before losing a bit of time in the final sector, but probably the real star of the show was Lance Stroll.

He’d looked like a solid top-10 contender all day and in Q3 he really stepped it up and went fourth overall. The two Red Bulls were second and third but will drop back with grid penalties, which means that Stroll will line up on second for tomorrows race. When he does so he’ll become the youngest driver ever to start from the front row, beating Verstappen’s record by 23 days. Not bad for someone with so little experience of driving in the wet!

Esteban Ocon was also pretty awesome. At one point it looked as though he could snatch a front row or maybe even pole, but he lost a bit of time in the final sector. Still, he’ll start from an impressive third on the grid – and given that teammate Sergio Perez couldn’t make it through Q2, he’s got a lot to be happy about.

Bottas was looking quick but messed up his final lap and ended the session only sixth quickest, but it was the Ferrari duo of Sebastian Vettel and Kimi Raikkonen who really struggled in the soaking conditions, ending up only seventh and eighth.

Check out the Q3 results above – but remember, several drivers have grid penalties for tomorrow’s race, meaning the final starting positions will look rather different. 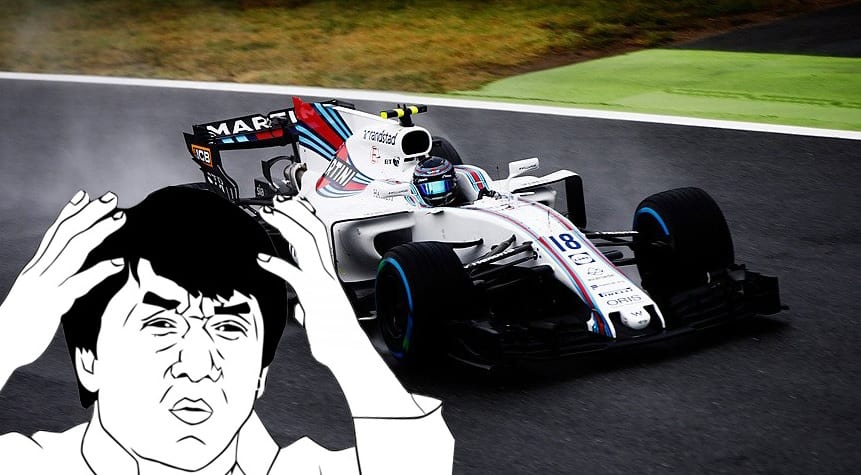