Super GT Cars Racing In DTM Was Every Kind Of Awesome

DTM and Super GT cars have been quite similar for a little while: too fast to be proper touring cars and too bespoke to be proper GT cars. Bringing the two together under a common set of regulations seemed like a no-brainer but it took years to happen. From next year, both championships will run to the same set of ‘Class 1’ regulations, theoretically allowing manufacturers to compete in both series with the same car.

To celebrate, both series have come together for a couple of joint races this year, the first of which took place in Hockenheim last weekend – and it was every bit as cool as we’d hoped.

Honda, Nissan, and Lexus each sent over a car and drivers to be wildcard entries in the DTM finale. Ineligible for points and having to run to DTM’s rules, they weren’t particularly competitive, but they were close enough to make us wish this had been sorted out years ago.

The main problem the Japanese manufacturers encountered was the enforced switch to DTM’s Hankook tyres. Super GT has a proper tyre war with multiple tyre manufacturers, so having to use something which behaves completely differently made it hard for drivers to adapt, and difficult for teams to work around it with setups with such limited practice time on an unfamiliar circuit.

Even with ‘Balance of Performance’ rules brought in to try and get some level of parity, the Super GT cars lack DRS and push-to-pass, giving the DTM cars a boost on the straights. In Super GT, the length of pit stops is determined by the amount of time it takes to refuel. Now, refuelling isn’t a thing in DTM, putting the Super GT mechanics under pressure to change tyres as quickly as possible – again, without as much practice as the DTM teams.

As if the cards weren’t stacked against the Super GT entrants enough, many of the drivers also encountered problems. In the first race, Tsugio Matsuda’s Nissan broke down before the race had even started (though he later rejoined several laps down) while Ryo Hirakawa’s Lexus had to make two stops for tyres, instead of the usual one. Then in the wet second race the Lexus (now driven by Nick Cassidy) crashed out on the opening lap, while Jenson Button’s Honda and Ronnie Quintarelli in the Nissan brought up the rear of the pack as they struggled in the unfamiliar conditions.

It wasn’t all bad news, though. Button qualified a superb sixth for the first race and was running in the top 10 by the time of his pit stop. Unfortunately, it was dreadfully slow and he emerged in 15th place, but was able to charge back through to ninth.

However, the absolute best thing was just seeing the two worlds of Super GT and DTM collide in an epic motorsport crossover event. As a European, Super GT has always seemed somewhat distant – you usually have to get up early in the morning to watch it through bleary eyes on YouTube and I suspect most people’s introduction to the cars will have been on a Gran Turismo game of some kind. Seeing them race on a more familiar track against familiar teams, cars and drivers… well, it was just the best.

We’re not going to have to wait too long to enjoy it again, either. This time, however, it’ll be on Super GT’s home turf: a special non-championship race is being held at Fuji from 22-24 November. Bring it on! 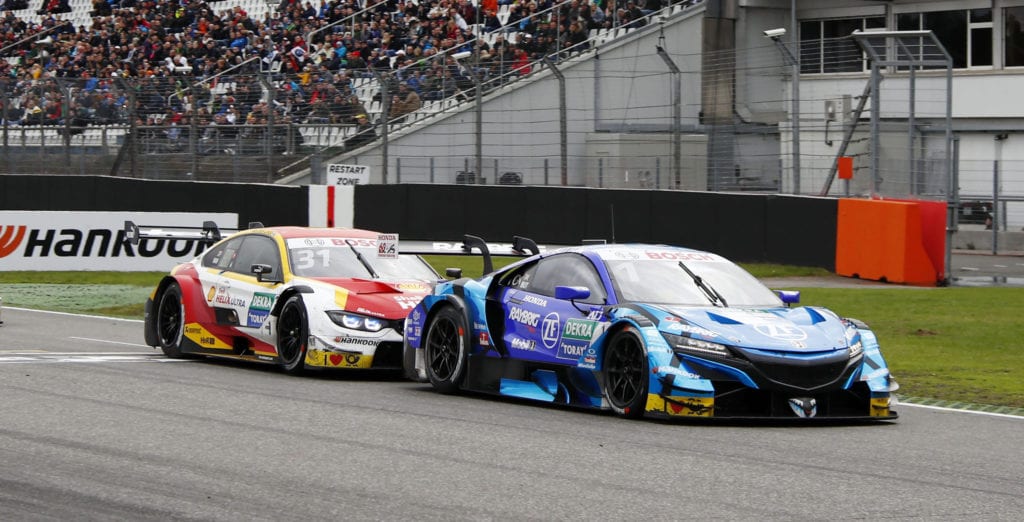