That Time Villeneuve Passed Schumacher Around The Outside At Estoril – WTF1
Skip to content
×
Formula 1 , Retro

That Time Villeneuve Passed Schumacher Around The Outside At Estoril

In the run up to the 1996 Portuguese Grand Prix, Jacques Villeneuve took a look at the last corner of the Estoril circuit – a long, fast right-hander – and reckoned it was possible to overtake someone around the outside of it.

His mechanics laughed at the suggestion, saying that if he tried it, they’d have to go and pick him out of the barriers.

Jacques took that as something of a challenge, and if there’s one thing he doesn’t do, it’s back down from a challenge. So when Michael Schumacher hesitated behind a backmarker going into that very corner, Jacques put his theory into practice.

After pulling off what was easily the move of the season, Jacques buzzed his team on the radio: “I told you it could be done!”, he said.

Free from being stuck behind the Ferrari, Villeneuve passed Jean Alesi for second during the pit stops, and after a series of blistering qualifying-style laps jumped teammate Damon Hill to go on and win the race, taking the championship down to the final race in Suzuka.

But it was his mega overtake which had got everyone talking. After the race Jacques said:

I had nothing to lose, it was worth taking a big risk. I got him on the outside. My oval experience helped there a little bit. That was a lot of fun!

Unsurprisingly, the only person who didn’t like it was Schumacher, who called the move dangerous. If he was trying to get under the Canadian’s skin, he was barking up the wrong tree! 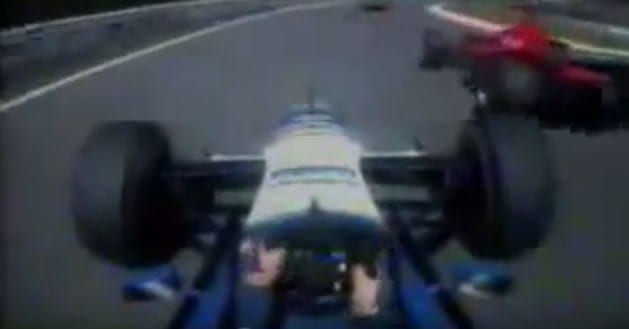