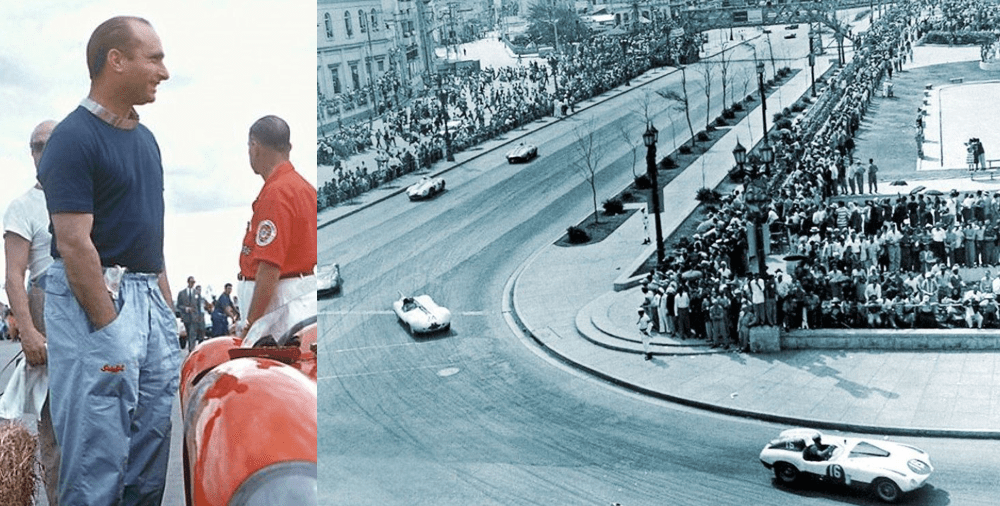 As part of a new series, we’ve decided to take our ‘That Time When’ podcast series (give them a listen here, or on your favourite platform) and turn them into videos where we make terrible attempts to act out the stories through a series of skits.

The first in the series feature the kidnapping of five-time F1 champion, Juan Manuel Fangio. We hope you enjoy watching it as much as we did making it. Let us know what stories you’d like to see us cover in the future!

In the late 1950s, the Cuban government was keen to promote the country as a tourist destination and so arranged a sportscar race on the streets of Havana. Many big-name drivers of the day like Stirling Moss, Juan Manuel Fangio and Peter Collins competed, with Fangio winning the first event in 1957.

In February the following year, the race was run again. But this time, things didn’t quite go to plan.

By 1958, the atmosphere in Cuba was very different. A group of communist rebels, led by future Cuban Prime Minister Fidel Castro, was threatening revolution. One of Castro’s top men, Faustino Perez, decided that a good way to draw attention to their cause would be to cause disruption to the Cuban Grand Prix by kidnapping perhaps the most famous racing driver in the world – five-time F1 champion Juan Manuel Fangio – and preventing him from racing.

The night before the race, Fangio was on his way to dinner at the swanky hotel he was staying at when a man in a leather jacket and eight of his pals approached him with a pistol and said: “come with me”. Fangio initially thought it was some kind of joke before realising the man was deadly serious, at which point he was escorted to a waiting car and driven to a secret location.

Unusually for a typical kidnapping story, the perpetrators were thoroughly apologetic for having to take him away. They repeatedly explained that they meant no ill will towards Fangio and merely wanted to draw attention to their political cause. Apparently, they’d also planned to take Stirling Moss, too, but Fangio was able to convince his ‘hosts’ that Moss was on his honeymoon and that kidnapping him wouldn’t have been a great way for him to begin married life.

The kidnappers quickly made it known that they’d taken Fangio, and the man himself was allowed to send a note to the press confirming that he was OK. Immediately, the Cuban government sprung into action to try and find the star of their race. Searches and interrogations were conducted throughout the night and airports were heavily monitored in case they tried to take Fangio out of the country.

As the sun rose, there was still no sign of Fangio and the decision was taken for the race to go ahead anyway. The event was marred by tragedy when a Ferrari driven by Armando Garcia Cifuentes crashed into the packed crowd, killing seven people. The race was red-flagged and Moss declared the winner, though he agreed to split the money with Masten Gregory, who’d lost the lead in the confusion of the race stoppage.

But while all of this was going on, where was Fangio?

The kidnappers had moved him to a couple of different safehouses throughout the night to try and throw their pursuers off the trail, but it’s not like he was tied up in a cold, dark basement with a bag on his head.

Instead, Fangio was afforded all the amenities he might have expected from his hotel: a comfortable room, all the food and drink he wanted, and even a radio so that he could listen to the race – though he declined that. Castro’s right-hand man Perez even paid him a visit and reassured him that they’d let him go after the race. And that’s exactly what they did.

At midnight that evening, Fangio was dropped off at the Argentinean ambassador’s home with a letter apologising for having kidnapped him, as well as an open invitation for Fangio to return as a guest of honour when Castro’s revolution had been completed – this time on his own terms.

Fangio was rather unmoved by the whole ordeal and said he had no hard feelings towards his kidnappers, and merely chalked it up as “one more adventure”. It paid off handsomely for Castro, too – the kidnapping had made headlines worldwide and drawn attention to the cause of the revolution. Fangio was even invited onto US talk shows to talk about his experience, something that oddly hadn’t been the case with his incredible achievements in F1.

Fangio eventually returned to Cuba in 1981 on a business trip with Mercedes Benz and met up with Perez and Castro, and on Fangios 80th birthday in 1991, he received a birthday message signed off from “your friends, the kidnappers”

It’s believed that the kidnapping had played a part in Fangio’s decision to retire from motorsport later that year. He was 46 years old at the time and, having survived for so long in a lethal era of racing, was becoming increasingly concerned that something might eventually go wrong. Being kidnapped because of his fame and profile added fuel to the flames and after that year’s French GP, he hung up his racing goggles for good.

As for the Cuban GP? The 1959 race didn’t run due to the revolution, but it did return in 1960 – albeit on different circuit located on an airbase, the last time it was ever held.