Races around the Circuit de Monaco aren’t known for constant action, and it usually takes rain showers to throw up unpredictability and excitement.

The 2017 Monaco GP looked set to be a pretty disappointing race, but after an underwhelming first half, it them picked up pace in the closing stages.

It was trickier than past rounds, but let’s dive right into the best moments from this year’s race around the streets of Monaco.

As Jenson Button drove to the end of the pitlane to start what’s set to be his final F1 race, he got a nice and unexpected message from his former team-mate Fernando Alonso.

Live from Indianapolis, Alonso took over Button’s team radio to send his best wishes before Button’s F1 return. It was awesome to hear, and a hilarious little conversation too. Check it out here.

The start of the Monaco GP really is crucial, as it’s so difficult to overtake in Monaco. Kimi Raikkonen kept the lead into Turn 1, with Sebastian Vettel and Valtteri Bottas chasing. Amazingly, all cars made it through largely unscathed and it was a pretty clear lap one.

Button and Pascal Wehrlein’s races didn’t get off to the cleanest of starts. They pitted at the end of lap one to change tyres but Wehrlein’s car was released right into the path of Button’s McLaren, giving the Sauber driver a five-second time penalty. As you’d expect, Button had to slam on the brakes to avoid Wehrlein.

Nico Hulkenberg was looking to continue his run of top 10 finishes, but he was denied by a gearbox issue, which caused smoke to pour out of the back of his Renault on lap 16. He parked his car at Portier and retired.

With overtaking opportunities being so slim in Monaco, it all came down to the strategy. Max Verstappen was the first front-runner to pit on lap 33, with Bottas and leader Raikkonen stopping for new tyres over the next few laps.

But Vettel and Daniel Ricciardo stayed out a few extra laps on ultra-softs, and they emerged ahead of their rivals – the Ferrari in the lead, the Red Bull in third. One driver in particular wasn’t happy… Mad Max.

With just under 20 laps to go, Button tried an ambitious overtake at Portier on Wehrlein but it backfired. His front-left clipped Wehrlein’s right-rear wheel, pitching the Sauber onto its side and into the barrier. See footage right here.

The safety car was deployed because of the Wehrlein/Button crash, but even with the slow speeds, it couldn’t keep Sauber’s Marcus Ericsson out of the wall. Check out his awkward accident here.

The race had only just got going again when Stoffel Vandoorne buried his McLaren in the Turn 1 wall, in a similar crash to Ericsson. A safety car wasn’t required though as the marshals made quick work of clearing his MCL32.

Overtaking is so, so difficult but you can’t fault someone for trying. However, Sergio Perez was perhaps a bit too optimistic about this move on Daniil Kvyat paying off at La Rascasse. It ultimately cost both drivers the chance of a point.

Vettel crossed the line 3.1 seconds clear of Raikkonen to win the race, with Ricciardo third, Bottas fourth and Verstappen fifth. The race winner was clearly delighted on the podium but Raikkonen looked like he’d just dropped his ice cream.

What did you make of the Monaco GP? Let us know in the comments. 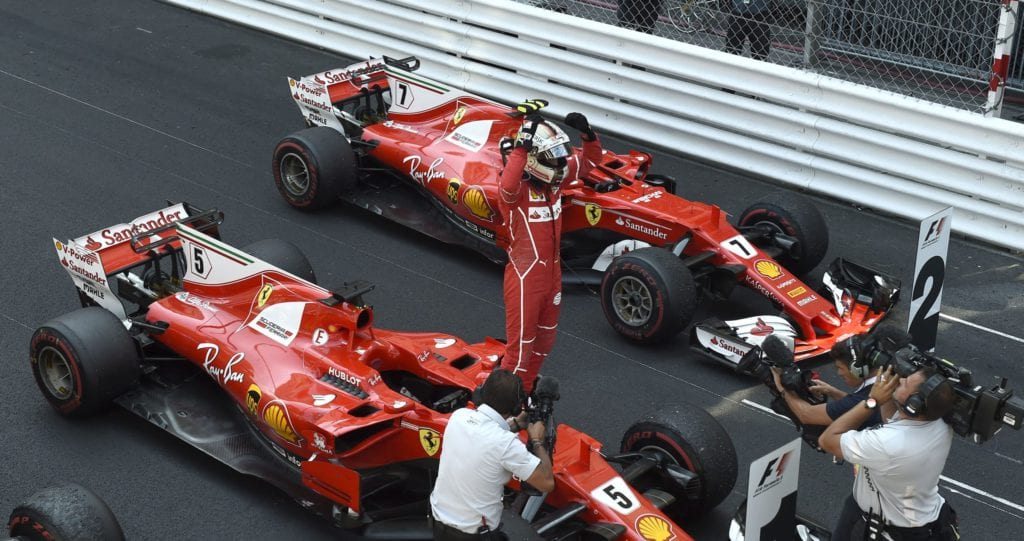