The 10 Drivers Who Started The Most Races Before Scoring Points

These 10 drivers eventually did manage to get a score on the board however – though to date it’s taken them longer to do so than any other driver.

Pedro Diniz came into F1 largely because his wealthy father was instrumental in the setting up of the Forti team in 1995. Diniz had no chance of scoring points for the hapless team, but not because he was yet another hopeless mid-90s pay driver – he was actually pretty solid, and on occasion fast.

Ligier snapped him and his money up for 1996 and although Olivier Panis had the beating of him, Diniz scored his first career point in Spain that year. He was the last classified finisher, but remember that was the soaking wet race where Michael Schumacher made everyone look silly – the fact Diniz got to the end (and ‘only’ two laps down) when many others did not was impressive.

He scored again at Monza that year, and in 1997 switched to Arrows where (amazingly) he occasionally had the measure of his world champion teammate Damon Hill. A strong fifth at the Nurburgring was his best result, something he matched at Spa the following year, proving he was no mug in tricky conditions.

After two more years with Sauber and a failed attempt to buy the Prost team, Diniz retired to his native Brazil, joined his father’s supermarket business and became a farmer.

K-Mag’s father was incredibly highly rated when he joined F1. He’d smashed Ayrton Senna’s win record in British F3 in 1994 (then the primary series for young talent) and after a one-off drive for McLaren in 1995 he joined Stewart full-time for 1997.

Although the car wasn’t the fastest or most reliable, Jan struggled to match teammate Rubens Barrichello in 1997, and in 1998 things weren’t going much better either. At the seventh race of the season in Canada he finally brought the car home in the points by finishing sixth – but the team was through with Jan. Despite the point he was sacked and replaced by Jos Verstappen for the rest of the season, spelling the end of his F1 career.

Jules Bianchi probably shouldn’t have scored any points in his tragically short career, because Marussia (like the other two ‘new’ teams which had joined in 2010) never really looked close to finishing in the top 10. But in his second season in 2014 Bianchi put in a stunning drive at Monaco and finished a brilliant ninth to bag himself a couple of points.

Sadly Jules never got to add to his tally following the accident in Suzuka later that season which eventually claimed his life. It’s a fair bet that he would have done though, given that he was being lined up to replace Kimi Raikkonen at Ferrari in the future.

American Harry Schell took part in the second ever Formula 1 race at Monaco in 1950 and was a frequent competitor over the first half of the decade. However even though this was the era of small grids, high attrition and sharing cars with quicker drivers, Schell didn’t seem able to score a point.

That changed in 1956 however when he drove his Vanwall to a strong fourth place at Spa, his 26th Grand Prix. This seemed to boost him somewhat as he was seventh in the championship for Maserati in 1957 and finished third at Pescara, and in 1958 (now driving for BRM) he finished second at Zandvoort on his way to sixth in the championship.

He’d built a reputation as a dependable driver and regular points scorer and continued racing in F1 until 1960, when he died in a crash in a non-championship race at Silverstone.

After impressing in a one-off drive for Osella in 1986 Alex Caffi was signed to drive for the team full time in 1987. Points were never going to happen whilst he was in an Osella though and for 1988 he made the switch to the Scuderia Italia team.

It was the teams first season in F1 however, and the Dallara chassis wasn’t great, with Caffi managing a best of seventh in Portugal. The 1989 car was much better, and in Monaco he finally scored his first points, and a whole heap of them to boot – he was fourth at the end, having qualified an excellent ninth.

A couple of races later in Phoenix he could have had a podium but was shoved out of the race when trying to lap teammate Andrea de Cesaris. He added another point by finishing sixth in Canada and for 1990 he switched to the Arrows team. He scored a couple of points in Monaco again and was generally quicker than teammate Michele Alboreto, but things fell apart in 1991 when the team ran the disastrous Porsche engine.

For 1992 Caffi had to resort to joining Andrea Moda but after a couple of races he left the team, spelling the end of a once-promising F1 career.

Ukyo Katayama was once the subject of an hilarious ‘Murrayism’ where the legendary commentator said he was “undoubtedly the best Formula One driver that Grand Prix racing has ever produced”. If that was true it wouldn’t have taken him 31 races to score a point, but as Japanese drivers go he was certainly the most promising at the time.

He was crash prone in his early years and went pointless for Larrousse in 1992 and again for Tyrrell in 1993. But his sponsorship kept him in a drive with Tyrrell for 1994 and it just so happened to coincide with the last decent car the team ever built. Katayama stepped up to the mark and after scoring two points in the season opener at Interlagos he spent the rest of the year putting teammate Mark Blundell in the shade.

Katayama regularly found himself somewhere near the front of the field but unreliability limited him to just four points all season. His performances had attracted the attention of top teams and was allegedly offered a drive with Benetton for 1995 but he had to turn it down – he’d been diagnosed with back cancer, something he kept secret throughout his career.

Although he spent two more seasons with Tyrrell and a final one with Minardi in 1997 his illness affected his performances, and he never reached the heights of that stunning 1994 season ever again.

Alliot spent his first two seasons with the RAM team in 1984 and 1985 but there would be no points finishes – unsurprising given that the team never scored at all in its six seasons in the sport.

He was left without a drive for 1986 but was called up to the Ligier team following Jacques Laffite’s career-ending accident at Brands Hatch. It took six more races for him to finally score though, when he brought it home sixth in the penultimate round of the season in Mexico.

From there he moved onto Larrousse where he spent three seasons being fast but crash-happy, and also being a bit of an uncooperative backmarker. After another season with Ligier he went sportscar racing with Peugeot before returning to F1, again with Larrousse, in 1993. Thanks to his Peugeot connection he became a test driver for McLaren which resulted in a one-off drive for the team in Hungary, and after one more drive for Larrousse that year his F1 career came to an end.

Alessandro Nannini had all the talent to become a world champion, but his career ended when his hand got severed in a helicopter accident in 1990.

Like so many other talented drivers later would, he started his F1 career with the Minardi team, but the unreliable cars meant he only actually reached finished five races in two seasons with the team. When the car was running he’d done enough to prove himself though and Benetton took him on for 1988. In the second race of the season at Imola he finished sixth to score his first F1 point and followed it up throughout the rest of the year with four more points finishes, including two podiums.

The following year he took his first win at the Japanese Grand Prix following Ayrton Senna’s controversial disqualification, and was continuing his good form in 1990 before his career was ended by injury.

Jolyon’s dad got his F1 career underway in 1983 when he was a Williams test driver and was rewarded with a one-off race in Brands Hatch that year when the team entered a third car specifically for him.

Unfortunately for Palmer that would end up being the most competitive F1 car he ever raced. For 1984 he joined RAM and scored no points, and then spent two years driving for Zakspeed, again scoring no points. He just missed out on a McLaren drive in 1987 and ultimately ended up with Tyrrell, where four races into the season he finally scored his first career points after finishing fifth in Monaco.

It ended up being a good year for Palmer as he ended up winning the Jim Clark cup for naturally aspirated cars, and even scored a couple more points finishes in races where the turbo cars struggled, culminating with a career-best fourth in Australia at the end of the year.

Palmer spent two more seasons with the Tyrrell team, scoring the odd point or two here and there. In 1990 he joined McLaren and became the teams official test driver for the next three seasons, but there would be no more Grands Prix for him.

Top of the list comes Nicola Larini, though he could be considered fortunate to have even scored points at all!

After a couple of races for Coloni in 1987 he joined Osella for 1988, where he got the pleasure of racing the aptly named FA1L. There were no points for the team in 1989 either and he signed for Ligier in 1990. Although the car was reliable Larini still couldn’t manage to score, though he came tantalisingly close at the end of the year with a pair of seventh places.

The following year he signed for Lamborghini and started the season with another seventh place, but spent much of the rest of the season failing to qualify or even pre-qualify. In 1992 he switched to touring cars but maintained a foot in F1 with a testing role for Ferrari. He had another stab at managing to score at the end of the season when he replaced Ivan Capelli but still couldn’t manage it.

There were no Grands Prix for Larini in 1993, but he got another chance in a Ferrari 1994 replacing the injured Jean Alesi. It was during the tragic weekend at Imola that he finally managed to score a point in his 44th F1 start – and not just with a fifth or sixth either, but with a second place.

Larini made a brief comeback for Sauber in 1997 and scored a point in Australia, but he left the team – and ultimately F1 – after Monaco following a disagreement. 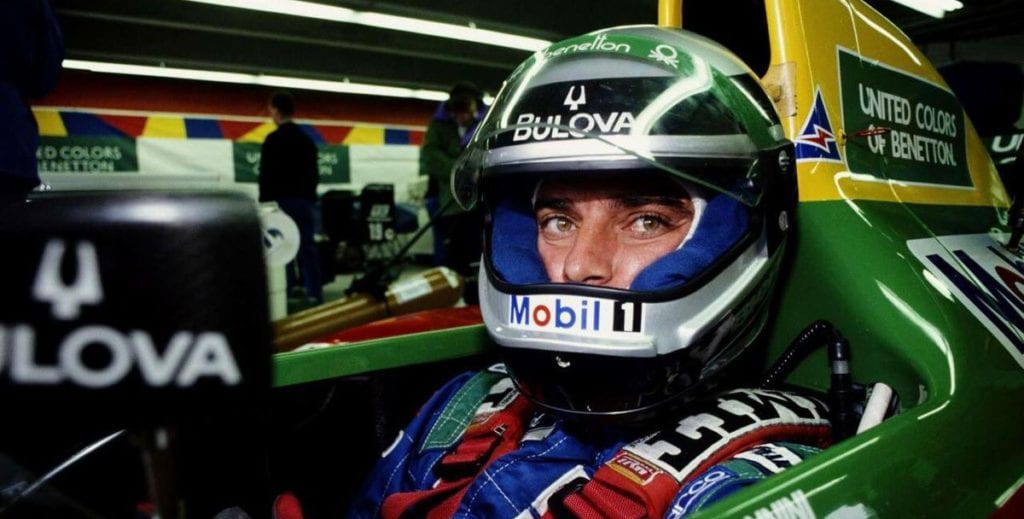