The 11 Best Moments From The Action-Packed Spanish GP

A good race? At the Spanish Grand Prix? Despite the drama and surprise of last year, we weren’t expecting a particularly exciting race in 2017. We were proved wrong.

From on-track clashes to heart-warming moments, good battles and intruiging strategy, there was a lot going on during the Spanish GP.

So, let’s get straight into it and take a look at the best moments from 2017’s visit to the Circuit de Barcelona-Catalunya:

It looked like Lewis Hamilton and Sebastian Vettel got pretty even starts, but the Ferrari picked up speed quicker and stormed into the lead on the run down to the first corner at Barcelona.

Valtteri Bottas, Kimi Raikkonen and Max Verstappen proved that three into one definitely doesn’t work at the first corner in Spain. Bottas was on the inside and clashed wheels with Raikkonen, which pitched the Ferrari into the side of Verstappen’s Red Bull.

Bottas got away with the brush of wheels but Raikkonen and Verstappen’s contact was pretty heavy and both drivers were forced to retire on the spot.

It's the 10th DNF of his career. Due to this collision with Raikkonen he is out of the race #SpanishGP pic.twitter.com/fzAOWfciQM

As Raikkonen and Verstappen’s damaged cars limped back onto the circuit, Felipe Massa had to take avoiding action and this put him into the side of Fernando Alonso’s McLaren. Thousands of fans probably gasped in unison at that very moment…

Alonso’s car was sent through the gravel and he lost quite a few places, while Massa picked up a puncture and had to limp back to the pits for repairs.

Thankfully the Circuit de Barcelona-Catalunya doesn’t resemble a desert – like in Bahrain – so Raikkonen had an easier time getting back to the pits after his retirement. But, for a moment, he decided to watch the action from the side of the track. His thoughts? “Bwoah”. Probably.

Kevin Magnussen and Carlos Sainz Jr. were in an intense battle for eighth and it moved to the pitlane on lap 15. Sainz’s stop was a little faster and he emerged right behind Magnussen. He was quicker to get up to speed and tried to move ahead on the inside but ran out of track and had two wheels on the grass…

K-Mag was not impressed and called him “crazy”.

Vettel was the first front-runner to pit and Hamilton stayed out longer, but Bottas had yet to stop. Quickly catching the Mercedes, Vettel couldn’t find a way through for a few laps, with Bottas holding him up. That was until this ridiculously ballsy overtake on the main straight.

Stoffel Vandoorne’s race ended abruptly with this crash at the first corner. He didn’t know Massa was there thanks to the closing speed of the Williams, which meant he turned in as normal and hit Massa. This broke his suspension. Well, at least it wasn’t a Honda issue?

Hamilton pitted at the end of the virtual safety car and gained time on Vettel, so when the Ferrari driver exited his stop (on medium tyres, compared to Hamilton’s softs) he was side-by-side with the Mercedes. It got so, so close between the two and they clashed wheels in the fight for first, with Hamilton being forced wide. He eventually moved into the lead with DRS a few laps later.

Finnish driver Bottas was keeping a cool head in third place, some way behind the top two, when his engine seemingly let go on lap 39. Flames were emerging from the back of his Mercedes as his chances of a podium went up in smoke. It was an old engine, but was still a surprise.

After Raikkonen’s lap one exit, the TV cameras zoomed in on a little kid wearing Ferrari kit crying in the grandstands. He cheered up when Vettel passed Bottas and then got the chance to meet Raikkonen during the race, getting a cap and picture with the Iceman. How cool is that?

It was a 55th victory for Hamilton as he crossed the line 3.4 seconds clear of Vettel, securing his second win of 2017 and at the Circuit de Barcelona-Catalunya too.

Ricciardo rounded out the podium for Red Bull but he was over one minute and 15 seconds behind. He was also the only other driver on the lead lap alongside the top two, which just proves the dominance of Mercedes and Ferrari. 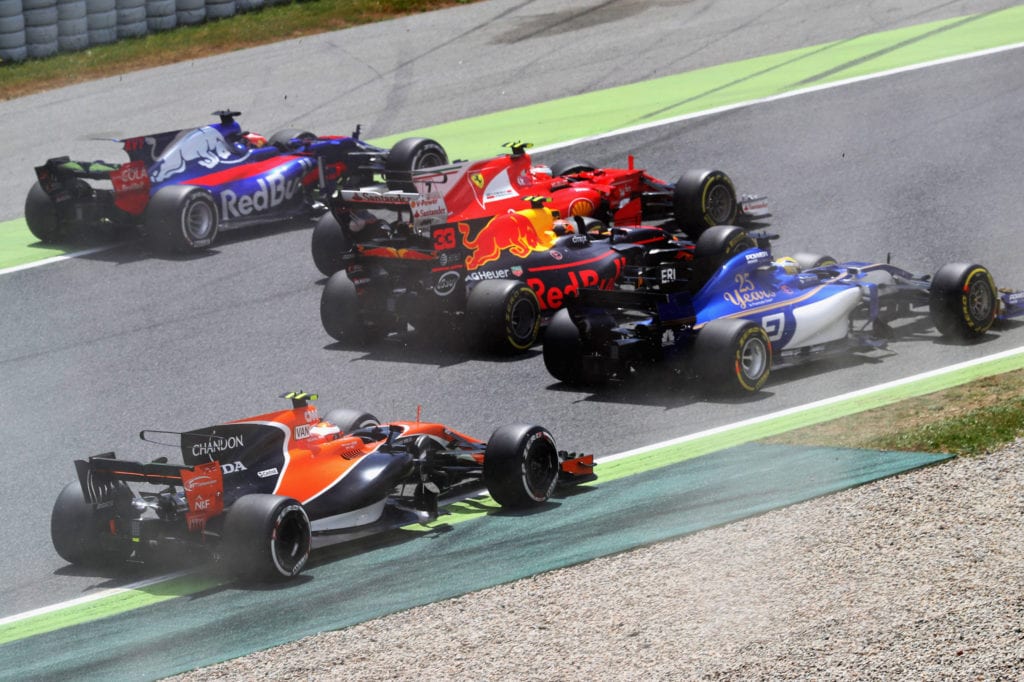