The 12 Best Moments From An Absolutely Crazy Azerbaijan GP

Aside from a frantic first lap, the opening stages of the Azerbaijan Grand Prix made it look like the race was becoming a procession like we had in 2016. But when the safety car come out on lap 12 to retrieve Daniil Kvyat’s stricken Toro Rosso all chaos seemed to break out.

Here are just 12 of the best moments from an utterly bonkers Azerbaijan Grand Prix.

The first lap was…well, pretty much what you’d expect from the first lap of a street circuit. Carlos Sainz spun his Toro Rosso in the first corner trying to avoid his teammate, but the big incident came at turn two when Valtteri Bottas bounced into the side of Kimi Raikkonen.

Amazingly Kimi kept going (albeit a few places down) whilst Bottas had to pit at the end of the lap for repairs which dropped him a lap down.

This, along with a couple of other incidents started to litter the circuit with debris, but more on that later on.

As the saying goes, if Max Verstappen didn’t have bad luck he’d have no luck at all. Just as in Canada, Verstappen was running in a really strong position and might even have had the pace to challenge for victory when his Red Bull broke down.

The Dutchman has now failed to finish four of his last six races – surely his fortunes will turn around soon?

Just as the race looked to be well on the way to becoming a pretty uneventful one, the safety car came out so that stewards could clear away Kvyat’s stricken Toro Rosso. The restart was rather frantic and among all the battles more debris went on the track, forcing a second safety car period.

As the cars were getting ready to restart again Sebastian Vettel went into the back of Lewis Hamilton and then vented his anger by swerving into the side of the Mercedes, Pastor Maldonado style.

Vettel claimed that Lewis had brake tested him, though after the race Lewis maintained his innocence. This one is going to run and run…

Following on from the drama between Sergio Perez and Esteban Ocon in Montreal the Force India boys were at at again, this time with bigger consequences however.

Ocon got ahead of Perez in turn two but didn’t quite leave his team mate enough room on the exit, and Perez ended up in the wall. Both cars had to pit for repairs but whilst Ocon got back out, Perez’s issues were rather more serious. He rejoined the race following the red flag period but later retired for good with a loose seat.

Ahh yes, the red flag. All the action at the safety car restarts caused the circuit to be littered with debris and forced the safety car to be deployed for a third time, which eventually became a red flag on just lap 22.

It was kinda welcomed too as so much had happened that we all needed to catch our breaths and digest just what had gone on.

When the race finally got going again we were treated to an absolutely mega bit of driving from Daniel Ricciardo.

He was on the run down to turn one he was attacking the WIlliams of Felipe Massa (who unfortunately had a problem), whilst behind him Nico Hulkenberg was benefitting from the massive slipstream to draw alongside as well.

But under braking Ricciardo not only managed to get ahead of Massa and Hulkenberg, he also managed to lunge ahead of Lance Stroll too!

On the following lap Kevin Magnussen pulled off a similar move to get ahead of Massa and Hulkenberg, proving that getting a double two down Baku’s long, long straight is a massive advantage.

With Hamilton looking unbeatable up front, his race was thrown into disarray when the headrest on his Mercedes started to come loose. He frantically tried to fix it whilst driving but eventually he was told to pit for repairs, dropping him way down the order.

After Vettel’s antics behind the safety car many were wondering just how harsh Vettel’s penalty would be. Disqualification? A race ban? Nope – he was given a 10-second stop-go penalty.

After some protesting over the radio he eventually came in to serve it, and when he came out he was ahead of Hamilton. Not a bad result given what had happened…

All the incidents left the rather unusual looking top three of Ricciardo leading from Stroll and Magnussen, with all the quick guys left having to recover.

Bottas, Vettel and Hamilton made quick work of the slower guys and quickly found themselves in third, fourth and fifth, with the likes of Ocon and Fernando Alonso unable to hold them off.

Further down the grid the Sauber drivers were scrapping over what would be the final point. Pascal Wehrlein was told he had to pass his teammate on track if he wanted it, but after this moment (and because of Stoffel Vandoorne catching them) Marcus Ericsson was eventually told to move out of the way, and it was Wehrlein who claimed 10th place at the flag.

Bottas spent the final laps rapidly closing in on Stroll, but it looked like the 18-year-old had done enough as he was far enough ahead as they started the final lap.

But on the long drag down to the finish line Bottas got up enough speed and with a bit of help from DRS, he managed to snatch second place on the line by just a tenth of a second. Not bad considering he was a lap down after his contact on the first lap!

The real hero though was Stroll, who’d driven a beautifully mature race to score a well-deserved first podium. He was also voted driver of the day for his efforts, though he was punished by having to share his first podium with Ricciardo. And you know what that meant…

Alonso said after qualifying that his only hope to score points was a chaotic race, and incredibly that’s exactly what happened.

Once again he put his McLaren in impossibly good positions, and amazingly found himself battling with Hamilton and Vettel at one point during the race. He eventually dropped down to ninth but his Honda engine lasted long enough for him to actually get to the finish and score two points.

Vandoorne also got to the end as well, giving the team it’s first double finish of the season.

But amidst all the craziness it was Daniel Ricciardo who recovered from his qualifying mishap to come through it all and take a superb victory, Red Bull’s first of the season.

Phew! Now that we’ve all got our breath back, let us know what you thought of the race! 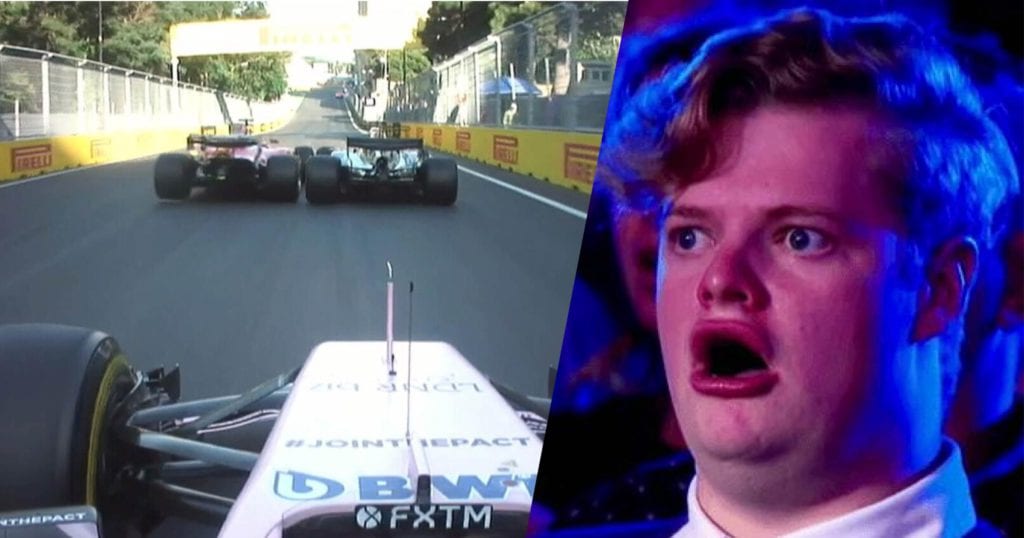