A lot has changed in F1 this year – the cars look better, there’s some brilliant racing and we have two teams battling at the front of the field. Not bad so far. Not bad, at all.

It’s also been a pretty fun season too, with loads of hilarious moments, team radio messages and interviews. Plus, a few new memes to get stuck into as well.

So, let’s reflect on some of the funniest moments from the 2017 F1 season so far, and relive some of the laughs.

There’s nothing funnier than an engineer getting a driver’s name wrong over the team radio, especially when it’s Valtteri Bottas getting called ‘Nico’. Not the thing you want to hear during the Chinese GP…

When Kimi Raikkonen went for a stroll through the desert after his car broke down during FP1 for the Bahrain GP, it produced a whole host of memes and photoshops. The official F1 account even got involved in the banter.

This was a subtle, but we loved Daniil Kvyat trolling Sebastian Vettel with his ‘torpedo’ comment – by running a special helmet at the 2017 Russian GP. Brilliant stuff!

What happens when your car breaks down on the outlap during FP1 for the Spanish GP? Well, if you’re Fernando Alonso, you leave the track and go play tennis.

This one isn’t just funny, but it also makes us quite jealous. Driving around the Red Bull Ring in Aston Martins while towing caravans looks like a brilliant laugh. Sign us up.

F1’s introduced post-qualifying interviews on the circuit this season, but Kimi Raikkonen’s chat with Will Buxton in Monaco didn’t quite to go plan. He ended up headbutting the microphone!

Fernando: "Take care of my car!"

Fernando Alonso decided to skip the Monaco GP to race at the Indianapolis 500, but that didn’t stop him from speaking to his stand-in Jenson Button over team radio before the race began. We’ll never know if Button peed in his seat or not…

There have been a lot of pointless penalties dished out in F1 over the years, but this one is absolutely mad. During Button’s one-off return in Monaco, he clashed with Pascal Wehrlein – which flipped the Sauber onto its side.

Well, the FIA decided to give Button a three-place grid penalty for his next race this season. Which is incredibly unlikely, as Monaco was a one-off. The award for the silliest F1 penalty goes to…

The ‘shoey’ made a triumphant return to the podium in Canada. Fans were chanting for P3 finisher Daniel Ricciardo to pour the champagne in his racing boot, and Ricciardo being Ricciardo, he accepted the challenge.

But, it was taken up a whole other level when podium interviewer and acting legend Sir Patrick Stewart was asked if he wanted to do a shoey too. “I’d love some” was his response, and what followed remains one of the best moments of the F1 season so far.

Vettel made it clear during the post-Austrian GP press conference he thinks Bottas jumped the start, but the Finn wasn’t fussed at all. His response is amazing.

After the Azerbaijan Grand Prix’s controversial clash between Sebastian Vettel and Lewis Hamilton, it was all anyone was talking about when F1 got to Austria. The FIA put both drivers in a press conference with Kevin Magnussen. Safe to say the Haas driver got a little bored.

We doubt many F1 drivers would photobomb a TV interview. But, Ricciardo isn’t like most F1 drivers.

This is what's happening while Lewis Hamilton is outside crowdsurfing #awkward pic.twitter.com/rn7a72YQNR

Hamilton’s crowd surfing antics after his British GP victory left P2 and P3 finishers Raikkonen and Bottas waiting in the post-race FIA press conference. Two Finnish drivers aren’t the most talkative company, so it was a pretty awkward wait.

Magnussen’s response to Nico Hulkenberg confronting him after the Hungarian GP was absolutely incredible and completely unexpected.

What’s better than an F1 meme? The driver involved in the meme, recreating the meme, next to a painting of the meme, underneath the F1 podium. That’s what.

We all know and love Toto Wolff’s mid-race reactions. It usually involves slamming his fist on the table and that’s what happened during the Hungarian GP, after Hamilton let through Bottas on the last lap (as promised earlier in the race).

What’s been your favourite funny moment so far in F1 2017? Let us know in the comments! 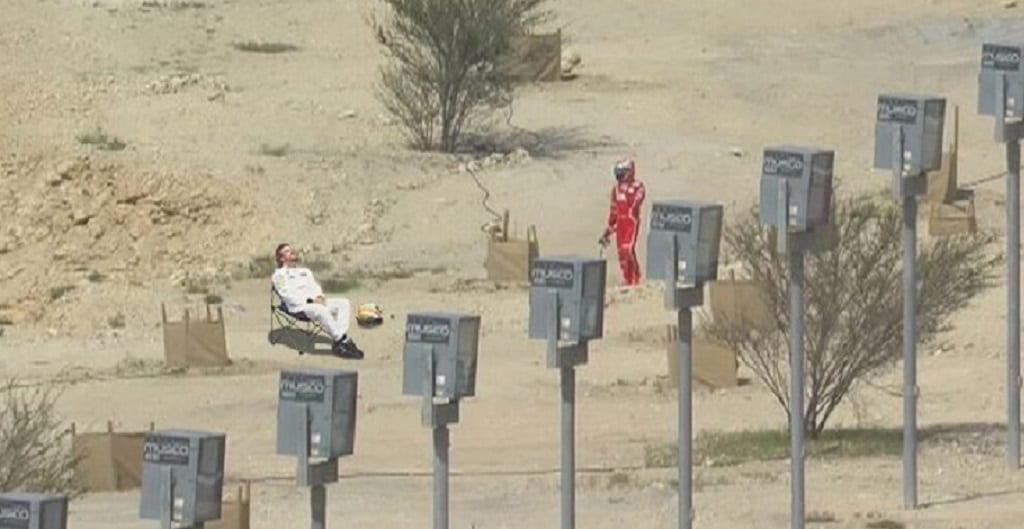