The 1994 Brazilian Grand Prix Was Filled With Drama And Controversy – WTF1
Skip to content
×
Formula 1 , Retro

The 1994 Brazilian Grand Prix Was Filled With Drama And Controversy

Ayrton Senna finally got his dream switch to Williams for 1994, but it had quickly become clear that the banning of electronic aids had hit the team hard. As pretty as it was, the FW16 was nowhere near as competitive or easy to drive as Senna would have been hoping for and in the opening race in Brazil, he had to work seriously hard.

He still managed to grab pole (this is Senna, remember) for his home race by three tenths from Michael Schumacher’s Benetton, but these two were clearly in a league of their own – Jean Alesi in third was a massive 1.4 seconds slower than the pole position time. At the start, Senna took off whilst Schumacher slipped back, allowing the Williams to build a small lead.

Schumacher passed Alesi for second on lap two and slowly started to chip away at Senna’s lead. By lap 21 he’d reduced the gap from four seconds to just one as the two came in to make their first pit stop. Senna may have led in but he certainly didn’t lead out as Schumacher and the Benetton team comfortably jumped ahead. But more of that later.

Further down the order, Schumacher’s teammate Jos Verstappen was enjoying his first grand prix and a battle with Eddie Irvine’s Jordan – well, he was enjoying it, until the pair of them came up to lap Eric Bernard. As the pair of them passed the Ligier, Irvine forced Verstappen onto the grass, trigging a three-car accident. That quickly became a four-car accident when they careered into Martin Brundle’s cruising McLaren, with Verstappen’s wheel scarily clouting Brundle’s head on the way over his car.

Thankfully everyone was OK, although Irvine was handed a three-race ban for causing it all.

Back at the front, Schumacher had built up a decent lead and Senna was doing everything in his power to reduce the gap. On lap 56, however, his challenge ended when he stepped fractionally over the limit, spun out of second place, and out of the race.

Schumacher comfortably won by a full lap from the other Williams of Damon Hill, but that super quick pitstop had raised some eyebrows. He’d taken on a similar level of fuel to Senna, yet been much, much faster.

Refuelling had returned to F1 for that season and all the new refuelling equipment was supposed to be standard. However, later in the season, it was discovered that Benetton was one of a few teams which had modified a filter within the refuelling rig, allowing the fuel to flow faster and giving the team a serious advantage during the race. Although the FIA found out what was going on, bizarrely, no action was taken. 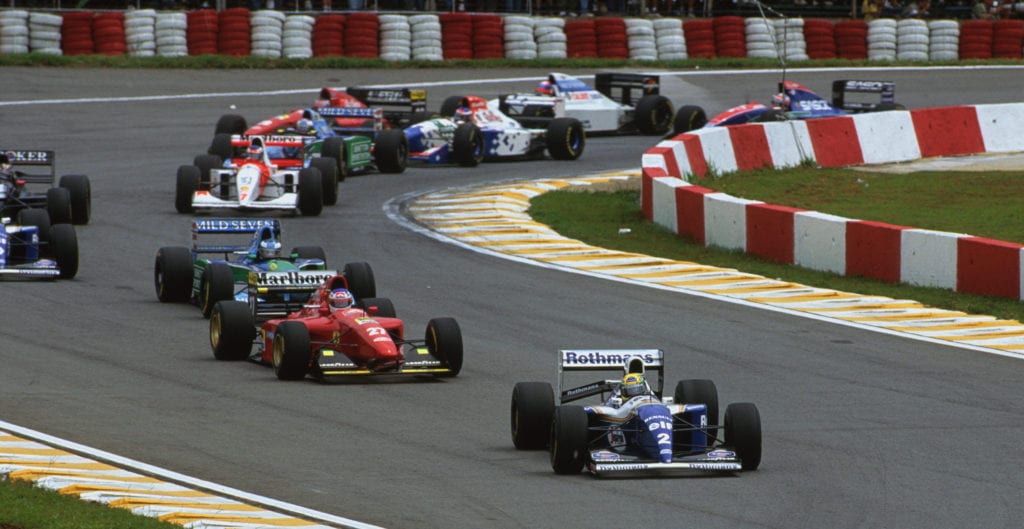