When the teams arrived in Montreal for the 2011 Canadian Grand Prix, Red Bull was a clear favourite given its domination of the opening six races. Sebastian Vettel had five wins to his name already and looked unstoppable in his bid for a second world championship. Lewis Hamilton had been the only driver to disrupt a perfect opening six races for Vettel with a win in China, but the German had finished second in that race and had clear control of the title fight.

Qualifying for the race had gone his way too, another pole position secured and a smaller threat from his teammate Mark Webber, who had encountered a KERS problem in practice that had followed through to quali. His hampered lap was only good enough for fourth on the grid, four-tenths adrift of his teammate and with the Ferraris of Fernando Alonso and Felipe Massa ahead of him.

The McLarens had looked like Red Bull’s biggest challengers of the season so far, but a difficulty in matching the Red Bulls and Ferraris for low downforce culminated in Hamilton lining up fifth and Button starting the race in seventh, with Michael Schumacher’s Mercedes filling the chromium sandwich in sixth.

Rain started falling on race day, and the start of the race was a rolling one on lap five after a safety car start that attempted to shift some of the standing water.

Vettel maintained his lead when the track went green despite a turn one sniff from the chasing Fernando Alonso. Hamilton and Webber were less cautious and collided competing for fourth into turn one. There was no significant damage, but the off cost both of them many positions; Hamilton dropped to seventh and Webber to 14th. Button lost ground too after going wide halfway through the lap and fell to sixth.

Vettel started to build a small gap in the wet conditions on the next lap. Further back the McLaren teammates collided on the pit straight, the pictures showed Button squeezing Hamilton into the pit wall, but the spray being kicked up in the midst of battle was largely to blame. The collision caused Hamilton to retire from the race, he later conceded that it was an unfortunate racing incident.

The resulting debris prompted another safety car period but crucially, Button had pitted on the lap of the incident to switch to the intermediate tyre. When racing resumed on lap 13, the Brit was well poised until the stewards slapped him with a drive-through penalty for speeding behind the safety car. He served this as soon as he could and emerged in a lowly 15th place.

Vettel was still leading the Ferraris at the front, and Michael Schumacher and Kamui Kobayashi in the Sauber were well positioned for a strong result too. The Mercedes driver and Alonso pitted for the intermediates, promoting Massa to second and Kobayashi to third.

But it was Rubens Barrichello’s pace on the inters further back that prompted a lot of the grid to ditch the wets. The Brazilian was 15th after his stop and was matching the leaders for pace in an inferior Williams car. Between laps 17 and 19, Jenson Button, who was already on the right tyre, jumped up to eighth place.

A few laps later, the varying tyre strategies were rendered irrelevant by a passing storm which dumped so much water on the circuit that the race was red flagged. A lap before the postponement, Jenson Button had pitted again for full wets and dropped to 11th.

There was a two-hour gap until the conditions improved and the race resumed, but those who waited patiently for the race to restart were rewarded with an incredible second-half. In true F1 style, after seven more laps behind the safety car, the intermediates quickly became the best tyre. Vettel stayed out whilst Schumacher led the majority of the grid into the pits for the inters. Button came in on the following lap.

The Brit encountered the Ferrari of Fernando Alonso exiting the pits on lap 37 and the two cars fought for 10th place. But at Turn 3, they collided in battle and Alonso was beached into the wall. It was a racing incident that brought out yet another safety car.

Button’s McLaren suffered a puncture as a result of the collision and emerged under safety car conditions at the back of the grid in 21st place. This was the moment in which Button came into his own and showed us all why he was considered one of the best in the field at judging interchangeable conditions and an evolving track surface. Once the safety car came in he quickly overtook a load of cars in just a few laps and was up to 14th with a strong pace.

The track was starting to dry at this point as the rain had finally stopped. Mark Webber was the first driver to brave slicks, and his times resulted in every car pitting in the following few laps. Button was still in the middle of the pack, but could feel the dry tyre, find the better racing lines and was now up to fourth and catching the leading trio of Vettel, Schumacher and Webber.

A collision on lap 56 between Kobayashi and Heidfeld brought the safety car out for the sixth time in the race and the pack was bunched up for the final sprint to the chequered flag.

When the racing resumed, Vettel again pulled a gap at the front as Schumacher and Webber battled each other, with Button in hot pursuit. The McLaren overtook both cars on lap 64, but their battle had allowed the leader to escape. Victory looked certain for Vettel, who had driven faultlessly.

But Button found something in those final laps. He was able to extract the maximum from the car and tenaciously closed the gap to Vettel, who was only nine-tenths ahead on the final lap.

Button never gave up despite many setbacks, and his car in the mirrors of the leader was always going to increase the prospects of a rare Sebastian Vettel mistake. When the leading Red Bull went wide at Turn 6 and drifted off of the dry line, there was a sudden sense that this wasn’t actually a grand prix, but a Hollywood script.

Button held his nerve and spectacularly gained the lead on the final lap of the race. Vettel held on for second ahead of Mark Webber for a strong Red Bull finish that extended the team’s lead in both Championships, but the day was Button’s.

After the race, team principal Martin Whitmarsh captured how much of the victory was down to the incredible judgment of the driver in the most testing of conditions.

“I think it was one of the best wins in the history of F1, let alone his. There were punctures, he had to change the front wing, and from 21st I don’t know how many times he had to overtake people. He just drove fantastically well. He kept focused. He applied as much pressure as he had to get past and really did a fantastic job. This was 90 per cent him and 10 per cent the car. He did a great, great, great job.”

The 2011 Canadian Grand Prix stands as a Jenson Button masterclass, a domination of the elements. 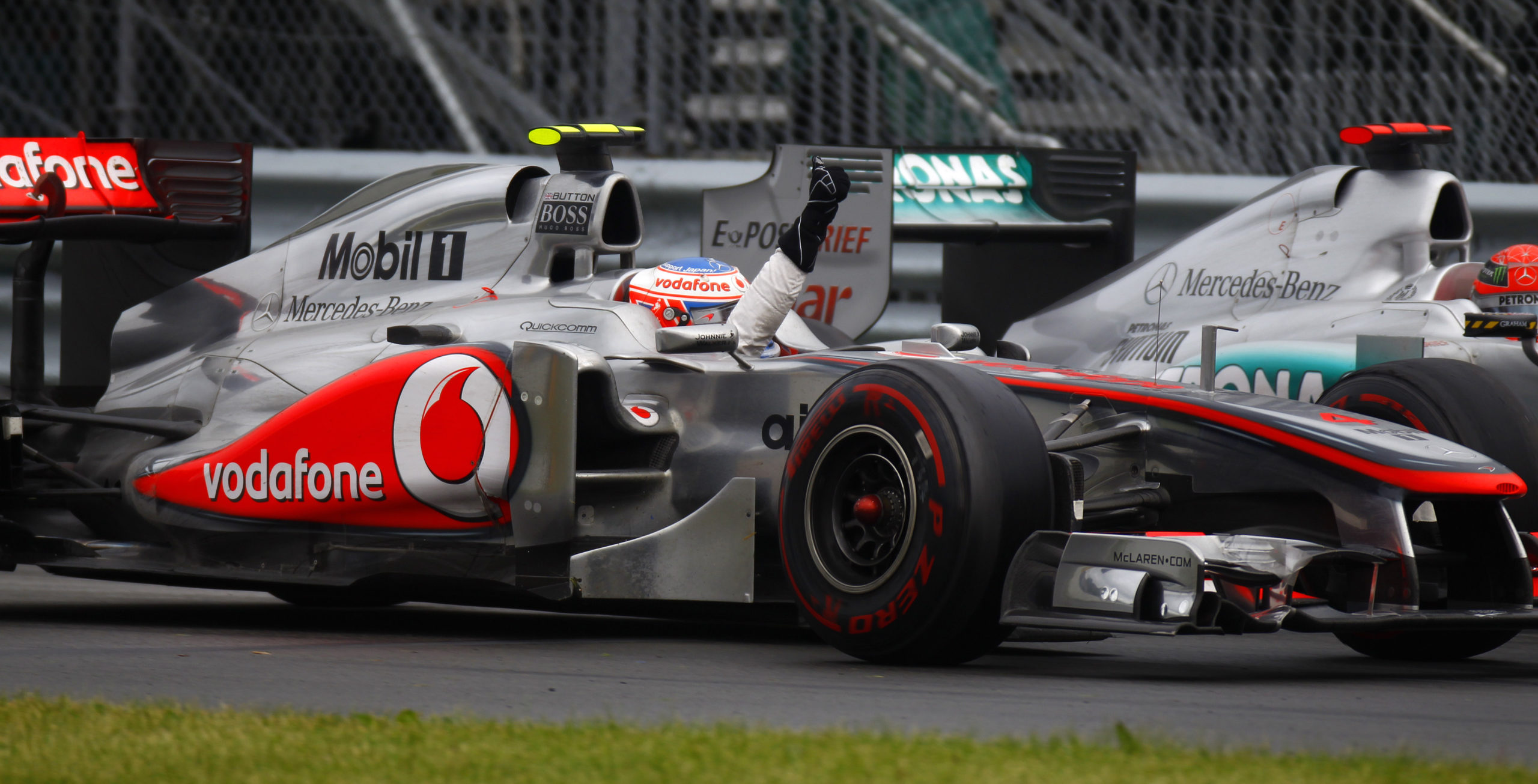