None of these categories feature in our annual homage to some of the more ‘alternative’ highlights of the 2018 Formula 1 season. So, without further ado, let’s dive in and see who the winners are!

There was a load of exciting battles this year but the best happened during the season opener in Australia. Social media exploded as the two Lastname siblings fought for the lead in their very first race.

Lastname eventually came out on top while Lastname slipped back, leaving many to believe that Lastname wasn’t quite as good as Lastname. Surprisingly they both went on to have anonymous seasons and neither has been signed for 2019, despite this epic battle. F1 can be a fickle business…

One of the stories of the off-season would be how Toro Rosso would get on with the Honda power units McLaren had been so keen to get rid of. There were plenty of questions over how quickly Toro Rosso would regret making such a choice, which the team answered with this brilliant fake FAQ.

The funniest moment, however, had to be this sensational tweet in testing which continued to poke fun at McLaren with this incredible ‘typo’. It was made even better by the fact that McLaren was having some issues in testing while Toro Rosso racked up more laps than any other team in the first test.

Sticking with the theme, after finishing fifth in Melbourne with Renault power, Fernando Alonso proclaimed ‘now we can fight’.

Two weeks later in Bahrain, Pierre Gasly finished fourth for Toro Rosso. In two races, Toro Rosso-Honda had managed a better result that McLaren-Honda could in three seasons. Gasly celebrated the occasion by repeating Alonso’s ‘now we can fight’ message, rubbing yet more salt into the wounds of the failed McLaren-Honda partnership.

Just when it seemed like the era of wide-angle camera shots incorporating naff CGI advertising was gone, along came the Canadian Grand Prix. Not only were the start lights changed to look like Heineken stars, but huge fake stars were added over the track and behind grandstands. Everything about them was just so awful that you couldn’t help but laugh, putting them firmly into the ‘so bad it’s good’ category. We hope there’s something similarly terrible in store for 2019…

The promotion for the musical acts performing at the US GP this year included a handful of drivers singing the Britney Spears classic ‘…Baby One More Time’. They’re all hilarious, but Esteban Ocon’s total commitment to the music completely upstaged his rivals. 10/10 for effort.

When Romain Grosjean crashed out behind the safety car in Baku, a team radio message suggested he’d been hit by Marcus Ericsson. This became instantly hilarious when the replay was shown and it turned out Ericsson was nowhere near Grosjean. Thus, a meme was born.

The funny thing was that it wasn’t actually Grosjean blaming the Sauber driver at the time, it was his unsighted race engineer. But by the time anyone realised it was too late – ‘Ericsson’s fault’ had already gained traction.

Funnily enough, what would be a surprise is if he came back in 2020 – like he keeps saying might happen, even though everyone knows he probably won’t.

This is the neeow guy. Up on the tower we were both walking down, I didn’t realize he did this until later. #legendary pic.twitter.com/DXrnOD4XHr

Sebastian Vettel has been known to do an impression or two in his time, and Daniel Ricciardo isn’t averse to putting on an accent. Yet both have been completely outdone by the ‘Neow Guy’ from COTA, who pulled off this flawless recreation of the sound of a grand prix into a TV microphone during the race. You just can’t tell where the actual sound of the cars end and his impression of the noise begins.

We love the slightly weird stuff that happens in F1 and we couldn’t help but go nuts for this hilarious moment in Austria. TV cameras accidentally revealed this email to a Williams engineer reminding him to wear the right clothes when he’s on the pit wall, because apparently that was a major concern for the team this year.

It’s been three seasons without Pastor Maldonado on the grid and we still miss him and the wacky adventures he’d get up to during a race weekend. That’s why we have to look for other drivers to commend for their silly on-track antics and in a year where a backmarker took out the race leader, there could only be one winner: Esteban Ocon.

As it was, they finished fourth and fifth in the championship. That meant neither had to attend the FIA Gala. It meant Kimi Raikkonen had to attend the FIA Gala and that meant we got to see him being very, very drunki. So thank you, Max and Valtteri, for just missing out on the top three. You’ve given us an incredible gift. In Max’s case this should definitely count for some of his community service.

Here’s to another year of the hilarious, the unusual, and the unexpected in 2019! 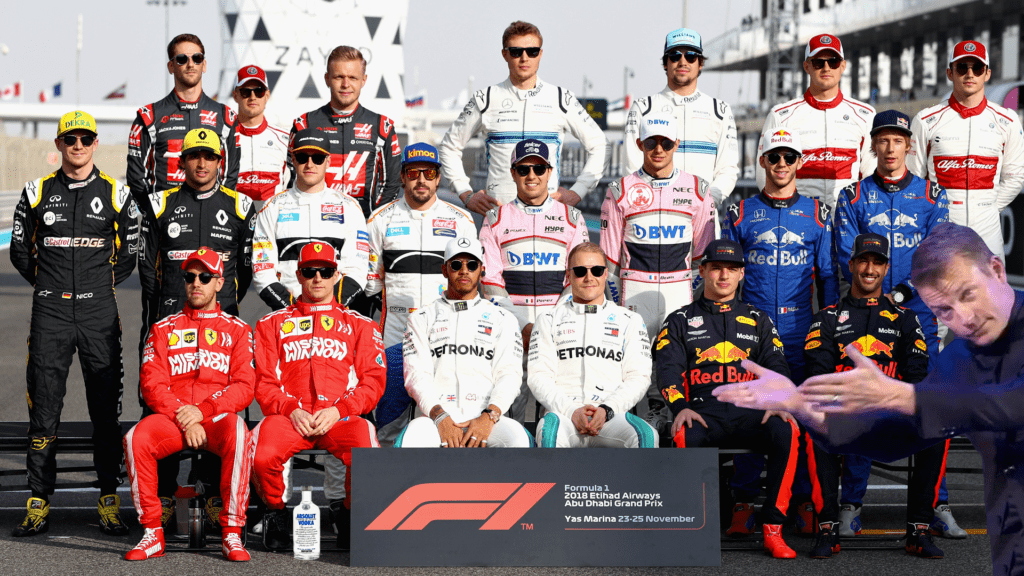