The 2020 Bahrain Grand Prix Has Been Nominated For A BAFTA – WTF1
Skip to content
×
Formula 1 , News
2 comments

The 2020 Bahrain Grand Prix Has Been Nominated For A BAFTA

We’ve often said that F1 has enough drama to rival any action movie franchise. It turns out F1 fans aren’t alone in thinking this, as the 2020 Bahrain Grand Prix has now been nominated for a BAFTA. Yup. Not Drive To Survive, but the actual race itself.

The nominations for the 2021 Virgin Media British Academy Television Awards are now available, and Sky Sports F1’s production team has made it to the Sport Category nominations.

Although the race itself was definitely not the most exciting we’ve ever seen, we assume the nomination has come about after the heart-stopping coverage of Romain Grosjean’s crash.

Fortunately, thanks to the incredible safety measures put in place by the FIA and F1, Grosjean was able to walk away from a traumatic fireball crash that engulfed his Haas F1 car in November of last year.

With F1 broadcasting the crash live to millions worldwide, we waited for what felt like hours to see if he was out of the car and alive. In what some have hailed a ‘miracle’, Grosjean managed to haul himself out of the wreckage and to safety.

Grosjean wasn’t able to continue with the rest of the F1 season due to the burns he sustained to his hands. However, he has now made a speedy recovery and is racing in IndyCar for selected races in 2021.

This isn’t the first time F1 has been nominated at the BAFTAs. ITV previously won the Sport category for their 2007 Canadian Grand Prix coverage when Lewis Hamilton won his first race. Robert Kubica was also involved in a dramatic crash that resulted in a concussion and a sprained ankle.

Should the Bahrain Grand Prix have been nominated, or is there a race from 2020 that you think should’ve been chosen instead? 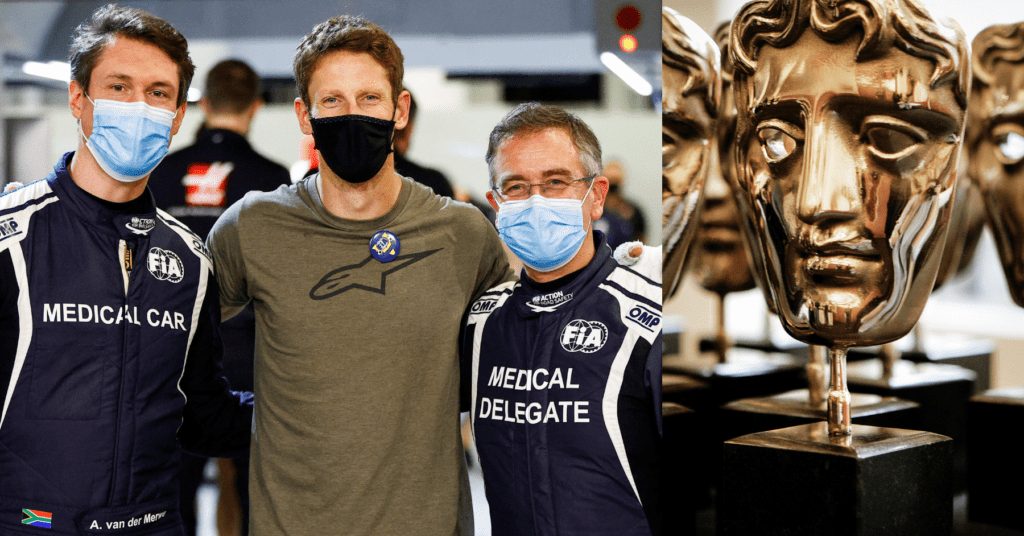