The 27-Year-Old Record That Carlos Sainz Broke In Brazil

It’s taken Carlos Sainz 101 races to reach his first Formula 1 podium. If that seems like a high number, it’s because it is: nobody else has waited longer for their first taste of champagne. In fact, if you take a look at the top eight – which we’re about to – you’ll see that in some ways, he’s had to wait quite a fair bit longer than anyone else whereas in others (and with a bit of context), he hasn’t. Let’s dive in.

Massa’s career began with Sauber in 2002 and while he was clearly fast, he was very erratic. A year testing with Ferrari calmed him down a bit and he returned to Sauber for 2004 and 2005 and put in a number of very impressive performances. The cars weren’t really capable of scoring podiums on merit, but the Ferrari he’d race in 2006 most certainly was – though that first rostrum didn’t come instantly.

A spin in Bahrain, engine penalties in Malaysia and a collision in Australia ruled out the first three races and while he was a solid fourth in Imola, teammate Michael Schumacher had won the race. Everything came together in the next race – his 57th – at the Nurburgring. He qualified and finished third, right on the gearbox of Fernando Alonso in second and just over four seconds behind race-winner Schumacher. His confidence continued to build throughout the season with more podiums and eventually a win… and the rest of his career was pretty good, too.

Massa is the prime example of a driver who took a little while to get going in his career and then when he got into a position more rife with opportunities, he was able to take them.

On a slightly different part of the scale is Gianni Morbidelli. He made his debut for Scuderia Italia in 1990, and had his first full season with Minardi in 1991 – though in the last race of the year he raced for Ferrari after Alain Prost was fired. He missed 1993 entirely before joining Footwork for the next two seasons, and it was in the 1995 Australian GP where he finally nabbed that first podium, when he finished third in a race of serious attrition.

It was only the fourth time he’d scored point and, as it turned out, the last. He briefly returned to F1 with Sauber in 1997 for a part-season, at which point he turned his attention to touring cars.

For a man who finished fourth on his debut in the 1989 Brazilian GP, just a second behind third-placed Mauricio Gugelmin, and who had such badly injured feet that he could barely even walk, you’d have thought Herbert might have reached the podium rather sooner.

However, a combination of his injuries and the fact he spent most of his early career racing for the waning Lotus team meant that he never really had the chance to get close again – at least, not until he joined Benetton at the end of 1994. Although the following year’s B195 was tough to drive for anyone who wasn’t called Michael, Herbert did OK with it and in the fourth race of the year finished second behind Schumacher, despite a wayward pit stop which saw him leave the pits with the rear jack still attached to the car.

He only managed three more podiums that year, however two of them were wins – and over the rest of his career managed a couple of podiums for Sauber and a stunning win for Stewart at the Nurburgring in 1999. Were it not for the F3000 accident in 1988 that almost cost him his feet, Herbert would surely have had a lot more trophies – and probably wouldn’t have had to wait six years and 67 races for that first podium.

De la Rosa’s career kicked off impressively when he scored a point for Arrows on debut in the 1999 Australian GP. Arrows was hardly a top team, though, and a move to Jaguar for 2001 didn’t prove to be the ticket to the front he might have been hoping for, so from 2003 onwards he became a McLaren test driver.

This paid dividends in 2006 when Juan Pablo Montoya abruptly quit the sport and de la Rosa was chosen to see out the season alongside Kimi Raikkonen. At the Hungaroring, three races into his substitute role, he spent much of the race running in the top three despite the tricky conditions and although race winner Jenson Button and Fernando Alonso (who retired while leading) were simply in form too good to beat, de la Rosa was probably the next quickest guy out there and was rewarded with a stunning second. Compared to Kimi he did an OK job and was in the running to keep his seat for 2007, only to be replaced by some chap called Louis Hammerton.

That was de la Rosa’s only time in something resembling a top car but he loved his racing so much that he carried on working in F1 well into his 40s, racing for Sauber and HRT and then taking on a testing role at Ferrari. He’s very much the kind of driver that you’re glad has a podium, considering how much they put into the sport.

Another case of a driver who was always good enough to nab a podium but just had to wait a while for the right circumstances. Unlucky not to get at least one in an impressive debut season with Williams in 2000, Button’s move to Benetton proved to come just as the team had slipped into backmarker territory before a fall-out with Flavio Briatore saw him move to BAR just as Renault was about to come good.

That turned out to be a blessing in disguise, however. BAR was once very much Jacques Villeneuve’s team, but once he’d had enough and quit at the end of 2003, Button found himself as something of a team leader – and with the BAR 006 proving to be better than everything except the dominant Ferrari F2004, he absolutely made the most of it. That first podium finally happened in the second race of the year in Malaysia (he’d been close to finishing third there with Renault the year before) and it proved to be the first of 10 podium visits that year on his way to third in the championship.

2004 really marked Button out as the star driver that he’d long been believed to be. Although his first win didn’t happen until 2006, when the whole Brawn GP story happed in 2009, it wasn’t entirely surprising that he made the most of the opportunity and won the title.

After making his debut with Lotus in 1994, Salo spent three years at a waning Tyrrell team before moving across to Arrows in 1998. In cars barely capable of points (let alone podiums) he often drove remarkably well and yet in 1999 found himself on the sidelines.

He briefly subbed for Ricardo Zonta at BAR at the start of the year, but then came a big opportunity: Michael Schumacher broke his leg in a crash at Silverstone and, as an experienced, fast driver with a good reputation, Salo was called up to keep his seat warm and assist Eddie Irvine’s championship bid.

It didn’t take him long to settle. In his second race for the team at Hockenheim, Salo was looking set to win until team orders relegated him to second: he finally had a podium, albeit presumably a bittersweet one. Everyone knew Salo was the true winner and as thanks, Irvine gave him the winning trophy on the podium. He followed it up with another podium at Monza – always special for any Ferrari driver – but it wasn’t enough to tempt Ferrari (or any other top team) into giving him a seat full-time. Instead, he went to Sauber for 2000 and then Toyota in 2002 before he finally retired.

Brundle made his debut with Tyrrell in 1984 and went through spells at Zakspeed, Williams, and Brabham before finally landing at Benetton in 1992, where the French Grand Prix saw him take home his first F1 trophy in almost eight years of trying.

Except, that’s not quite the case. Brundle was utterly mega with Tyrrell in his debut season to the point where he not only finished second in Detroit (just his seventh F1 start) but was a lap away from beating Nelson Piquet to victory. Unfortunately, two things then happened. First, Brundle broke his ankles in a shunt during qualifying at the next race in Dallas which caused him to miss the rest of the season and seemed to rob him of his raw speed. Secondly, Tyrrell was later disqualified from the entire season on charges of running underweight and using illegal ballast, stripping Brundle of his second place.

Having a strong result taken away is one thing, but to then have to wait over seven years to do the same again? Ouch. That ‘second first podium’ for Benetton would be one of nine he scored in the 1990s until his final season for Jordan in 1996. That’s still pretty good, but 10 would have been a much nicer, rounder number…

And so, here we are at Sainz. He made his debut with Toro Rosso in 2015 and would surely have ended up in a Red Bull at some point if Max Verstappen hadn’t turned out to be such a precocious talent and ended up becoming the team’s main focus.

Sainz’s career faced a bit of disruption as a result, first with a mid-season move to Renault in 2017 (where he remained in 2018 and never really seemed to settle) and then to McLaren in 2019, where he’s been tasked with filling the shoes of another rather talented Spaniard.

It’s worked out well now, though. He’s ended up being one of the drivers of the season and it seems somewhat fitting that he should stand on the podium (well, kinda) this year. Not only has he been superb, but it seems like an important moment in McLaren’s hopeful return to somewhere near the front of the grid.

101 races might seem like quite a bit more than the other drivers on this list, but in reality it’s a product of the fact that F1 seasons are so long now. Sainz took just under five seasons to get his first podium; Brundle and Herbert took more than seven.

Then again, of the 211 drivers to have officially scored a Formula 1 podium, only 12 took more than 50 races – Pierre Gasly’s first came in his 46th, for example. And if Nico Hulkenberg can somehow finish in the top three in Abu Dhabi, he’ll blow Sainz’s record out of the water: it would have taken him 177 races… 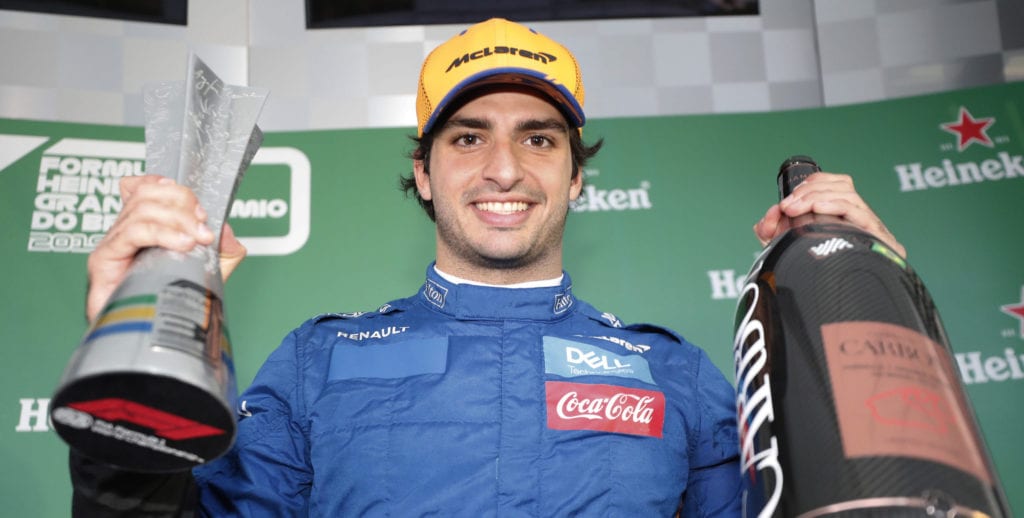