The 5 Drivers With The Most F1 Points Finishes

While teams and drivers are always aiming for F1 wins and world titles, for some, just scoring points is an important milestone.

The points system has changed a fair bit over the years and there are many more races per season, which are just two of the reasons why modern-day drivers dominate the points finishes list.

Taking a look at the F1 database Forix, we’ve delved into the statistics to see which drivers have picked up the most points finishes in the sport’s history – up to the 2017 Hungarian GP.

This one isn’t surprising, is it. For most of his time in F1, Michael Schumacher was a frontrunner with Benetton and Ferrari, particularly in the early 2000s when he was an unstoppable force, scoring five of his seven world titles during that time.

Over the course of his length F1 career, featuring a comeback with Mercedes, he finished in the points 221 times. Which is mightily impressive when you take into account he made 306 F1 starts (from 308 entries).

One fascinating bit of information from Fernando Alonso’s career stats is that, since returning to McLaren in 2015, the Spaniard has only scored 11 points finishes. Nevertheless, it’s not surprising he’s second on the all-time list of points finishes in F1.

Despite the McLaren blip and a point-less first season at Minardi, he’s been driving for top teams and had amazing periods of success. Renault, McLaren, back to Renault again and then Ferrari, racing for frontrunning teams has helped him rack up 190 points finishes in total.

The Iceman’s F1 form may have become a bit “meh” in recent years, but he’s still racing for a top team and this has seen him take 180 points finishes in his career so far. That’s third on the all-time list, and from 263 starts (264 entries).

Not bad at all from the Finn, and even more remarkable when you consider he took time out from F1 between 2009 and 2011 to (relatively unsuccessfully) try out Nascar and rallying. If he sticks around for another year, he could well surpass Alonso’s tally.

The three-time F1 world champion is fourth on the points finishes list with 163, from 199 starts. Obviously, Lewis Hamilton is a massively experienced driver on the current F1 grid, but on this list, he’s competed the lowest number of races.

With Mercedes continuing to be one of the top teams in F1 and Hamilton probably having a few more years in him yet, we can probably expect Hamilton to move up a place or two on this list. Unless he decides to head off and make music, or start a fashion line.

While it took Jenson Button until 2006 to pick up his first F1 win and 2009 to score his first and only F1 world title, the British driver spent many years in midfield machinery and was a consistent points finisher before finding success in the sport.

Of course, there were troubling seasons along the way – in 2001 he scored just once, and across 2007/08 he finishes in the top eight just four times – but it eventually worked out for him. From 306 starts (309 entries), he finished 162 in the points.

Button retired from F1 at the end of last year but returned for a one-off outing at the 2017 Monaco GP, replacing Fernando Alonso. 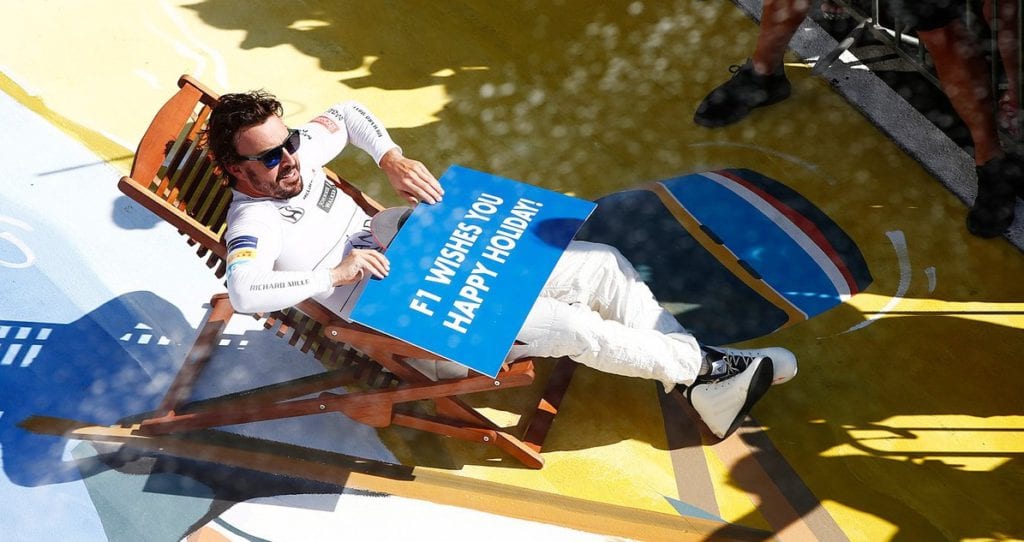