The 6 Unusual Gifts You Can Buy An F1 Fan This Christmas – WTF1
Skip to content
×
Formula 1 , Fun

Christmas is just around the corner, and we’ve scouted every inch of the internet to find you the wonderful, weird and wacky gifts that are on offer.

For the fan working from home…

If you’re like us, you’ve been spending a lot of time at home this year at a desk or your dining room table. Are you looking to refresh your work space? Perhaps you could splash some cash on a new chair, or instead invest in a Mercedes Carbon Fibre pen pot.

Yep, you read that correctly. Made from carbon fibre and a ‘dog ring’ used on the 2012 Mercedes driven by Nico Rosberg and Michael Schumacher, these are the pen pots of all pen pots and are available on F1 Authentics. Seriously, what a sexy desk accessory.

What better thing to put in your £250 pen pot, but a £400 Ferrari pen? We have no idea why the pen costs so much, but it does come with a lifetime warranty and a snazzy box. It’s available on the Ferrari website and for that kind of price we would be expecting Charles Leclerc to hand deliver it himself.

For the fan who’s a music lover…

What better way to blend two of your passions, mixing music and motorsport!

Now, whilst we all impatiently await Lewis Hamilton’s album drop as XDNA or until we can hear Daniel Ricciardo’s backing vocals in a new song from Gang of Youths, there are other options for those fans who are wanting to overlap their two favourite things.

Did you know that back in 2007 Jacques Villeneuve, the 1997 F1 World Champion, released a full album by the title of Private Paradise? Contrary to popular belief, the album is not a distape of him slagging off every driver on the grid, it was in fact a soft-rock meets pop genre of songs which included a touching tribute to his late father Gilles Villeneuve.

Reports are that it sold less than 1,000 copies in North America after its release, however it is now available to listen to on most streaming platforms. There is also a physical copy available to purchase on Amazon, but you need to be quick as there is just one left in stock at the time of publication. Oh, and it’s £20 plus shipping.

For the fan who loves a certain driver…

I think it’s fair to say we all have favourites in F1. Whether they’re on the current grid, or perhaps a previous world champion. You can buy merchandise like mugs, t-shirts and notebooks or take it to another level thanks to F1 Authentics.

With a huge selection of signed gifts and memorabilia, you could own a signed race suit from the likes of Daniel Ricciardo, Kimi Raikkonen or Carlos Sainz Jr. There is also a selection of replica racing helmets that have been signed, with even the odd race-worn helmet too. You could even own a piece of an actual race car, such as a 2019 Haas sidepod or a BMW Sauber Front Wing.

For the fan who wants to flex at races…

We all dream of attending a Grand Prix at some point, right? How about visiting the ‘jewel in the crown’ on the F1 calendar. The Monaco Grand Prix is the most exclusive race of the season and with the world’s rich and famous all gathering in the small principality to witness the most iconic race of the year, you could join them thanks to F1 Experiences.

Their ‘Legend’ package includes access to the exclusive F1 Paddock Club with all-day hospitality plus an open bar with champagne, guest appearances from F1 drivers, an exclusive pit lane walk with access to the F1 paddock and much more. For you and a friend, this is just a mere £13,036.

You’ve surely got that saved from pocket money, or could find some spare cash down the back of the sofa? Add in some accommodation at the Hotel de Paris which is located in Casino Square and you’re all set for a two-day extravaganza at just over £25,550.

For the fan who’s renovating their home…

Spending more time indoors this year has left many of us craving to redecorate our homes, whether that’s repainting our bedrooms or investing in some new furniture.

World Race Circuits on GP Box have a fantastic selection of circuits that you can hang up on your wall, for an awesome feature in any room. From a set including every race track F1 has ever visited, or a the original 2020 circuit line-up, they certainly make a funky feature wall for any motorsport fanatic.

If you want something a little more unique, other options include one-of-a-kind coffee tables such as this V10 Renault Engine and glass combination. Due to its rarity, it will cost you £25,000 but what a piece of motorsport history in your living room!

Got that friend who is always wearing the hottest F1 team gear drop, or maybe that’s you? Whoever it may be, big respect for repping the greatest sport on earth with your clothing choice. But wait, you’re looking for something a little different?

How about taking a look around our re-launched WTF1 shop? From a Lando Chair Hoodie to a t-shirt with Hamilton and Ricciardo sharing a shoey on the podium, the new shop has it all. If you’re looking for a comical F1 jumper, or maybe just a new facemask so you can represent the best F1 website around (*George Russell voice* FACTS), We have you covered!

But, wait! We have a special Black Friday Sale for you! For a limited time, you can now buy two of our best-selling T-Shirts for for £30, or even four for an amazing £60. What are you waiting for? 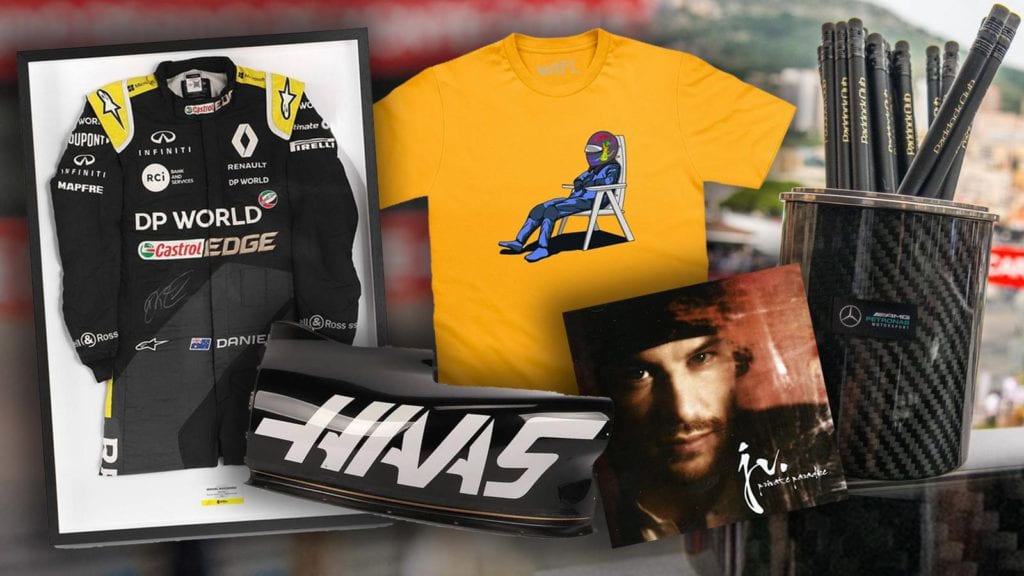