The fourth season of the FIA Formula E Championship got underway around the tight and twisted streets of Hong Kong and in typical Formula E style, it did not disappoint.

From crashes in qualifying, pole position being claimed whilst crossing the line backwards and a race full of overtakes and action, it certainly reminded motorsport fans what an unpredictable series it is.

Nico Prost hit the wall whilst on his qualifying run, losing the left rear end of the car and causing huge damage to his Renault e.Dams.

As well as leaving debris on the track, Prost also picked up a large amount of advertising banner which caught on his car and he consequently dragged whilst continuing with his qualifying time. Lack of yellow flags resulted in Jerome D’Ambrosio approaching Prost at speed and snatching the long material which then ruined his qualifying run. Red flags were waved and Q4 was halted.

Jean-Eric Vergne made it through to Superpole and managed to secure the provisional pole position with a time of 1:03:568. However, he didn’t cross the line in a conventional style – instead he found himself spinning backwards after contact with the final corner.

Although all 20 cars got away problem free in the tight first corner, it was a chicane later on in the lap that caused a headache for Formula E when four drivers at the back of the grid all collected each other.

Prost, Mitch Evans, Andre Lotterer and Edoardo Mortara all drove into the back of one another and brought out Formula E’s first red flag during an ePrix. After a long wait, racing resumed and all cars involved were able to continue in the race.

Season Two and Season Three Formula E champions and on-track rivals, Sebastien Buemi and Lucas di Grassi, both almost came together on lap five of the race when battling for position. The two have an extensive history of battles on the Formula E tracks.

It was also the first race since Punta del Este way back in 2015 that neither Buemi nor di Grassi got a fanboost, with the three drivers receiving fanboost being Kamui Kobayashi, Daniel Abt and Luca Filippi.

Lucas di Grassi was forced to pit mid-race after an issue with his right rear suspension, originally thought to be due to the contact earlier with Buemi. Lucas had since said that in fact a clash with teammate Daniel Abt was to blame for his damaged Audi.

Briton Sam Bird stole the lead from pole man Vergne on lap 20, pulling off a seriously impressive manoeuvre which ultimately won him the race.

The move on his former team-mate meant that Bird was able to pull away and gain an advantage that would become extremely handy later on in the race, which brings us to our next point.

It seemed that Bird had the win in the bag, that was until he drove into the pits for the mandatory car switch. Due to the surface in the pitlane, Bird was unable to stop the car as he desired and instead drove into the path of some of his DS Virgin Racing colleagues. Luckily nobody was injured and Bird was able to jump into the second car that was waiting for him.

Unfortunately as he did not comply with the Formula E regulations of safely bringing his car into the desired pit box, Bird was smacked with a drive-through penalty – something he did comply with and incredibly came out on track still in first place, with second place man Jean-Eric Vergne closely on his tail.
It was here that Bird would remain for the rest of the race, despite the best efforts from Vergne to take back the lead.

Nick Heidfeld, who had looked in contention for his first Formula E win after it was announced Bird had received a drive-through penalty, battled Vergne on track during the last few laps of the Hong Kong ePrix.

However according to Heidfeld in a heated post-race interview, Vergne had been weaving and unfair in his hogging of the track. “I was furious in the car because I was much quicker but that is the nature of a street circuit,” he told broadcaster Dario Franchitti. 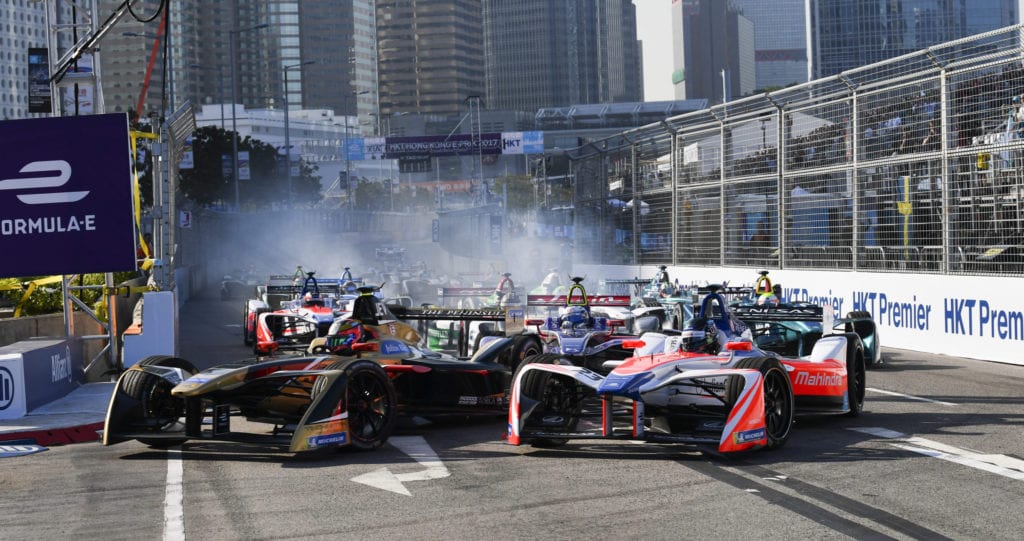