The 8 F1 Podiums With The Youngest Average Age

It’s no surprise that the list of the youngest average F1 podium ages is dominated by races from the last 10-15 years. In fact, the top 10 are all from after 2003.

Not in all cases, of course, but some F1 rookies are rising rapidly up the junior ranks and joining the grid while still in their late teens.

The 2017 Azerbaijan Grand Prix, which saw Lance Stroll pick up a podium in his first F1 season, got us thinking about the youngest average podium ages, so we’ve delved into Forix to reveal the stats.

Who can forget the 2008 Italian GP? In terrible, wet and rainy conditions, a young Sebastian Vettel dominated to claim both his and Toro Rosso’s maiden F1 victory. Heikki Kovalainen was second, with Robert Kubica third. All three were early in their F1 careers at the time, making it the youngest podium of all time.

The 2008 season had a number of young guns racing at the front, which is why it features a lot on this list. At the German GP, Lewis Hamilton took control early on, but a late pitstop dropped him to fifth and he rapidly moved up the field to win. Nelson Piquet Jr. scored a podium in his first F1 season, on a one-stop strategy, with Felipe Massa P3.

Remember this one? Fernando Alonso claimed his first F1 victory at the 2003 Hungarian Grand Prix, becoming the sport’s youngest winner at the time. Because of this, and both Kimi Raikkonen and Juan Pablo Montoya also being in their early F1 years, it’s the third youngest podium in its history so far.

Hamilton and Kubica were both in their second F1 seasons (second full one for Kubica, after he did a few races in 2006) when they finished P1 and P2 at the 2008 Monaco GP, a wet race where the eventual winner recovered from an early puncture after a glance with the wall. Massa was third, which also helped lower the average age.

Yep, the 2008 Singapore GP features on this list. Most famous for F1’s ‘crashgate’, Alonso was helped into P1 by a safety car for his team-mate crashing on purpose. The end result still stood even after the FIA investigations and punishments, meaning Alonso, a young Nico Rosberg and Hamilton remains one of F1’s youngest podiums.

Massa claimed victory at the 2007 Spanish GP, even with a brief refuelling fire. That couldn’t stop him, and he picked up the win, ahead of McLaren rookie Hamilton and Alonso, who bounced back from an early off-track excursion on lap one. It’s worth noting the top two teams of 2007 had pretty young drivers, which helped lower the average ages of the podiums.

It was a race of McLaren domination at the 2007 Monaco GP. Alonso took victory, with Hamilton shadowing the Spaniard for most of the race. Massa was P3 and the last driver to finish on the lead lap, which perfectly proves just how much quicker McLaren was around the Circuit de Monaco that year.

The two main title contenders in 2017 are older and more experienced, but both failed to finish on the Azerbaijan GP podium – in part, thanks to the controversial contact behind the safety car. This allowed Daniel Ricciardo to move into P1 and take a surprise victory, ahead of Valtteri Bottas – who pipped rookie Lance Stroll to P2 at the finish line. 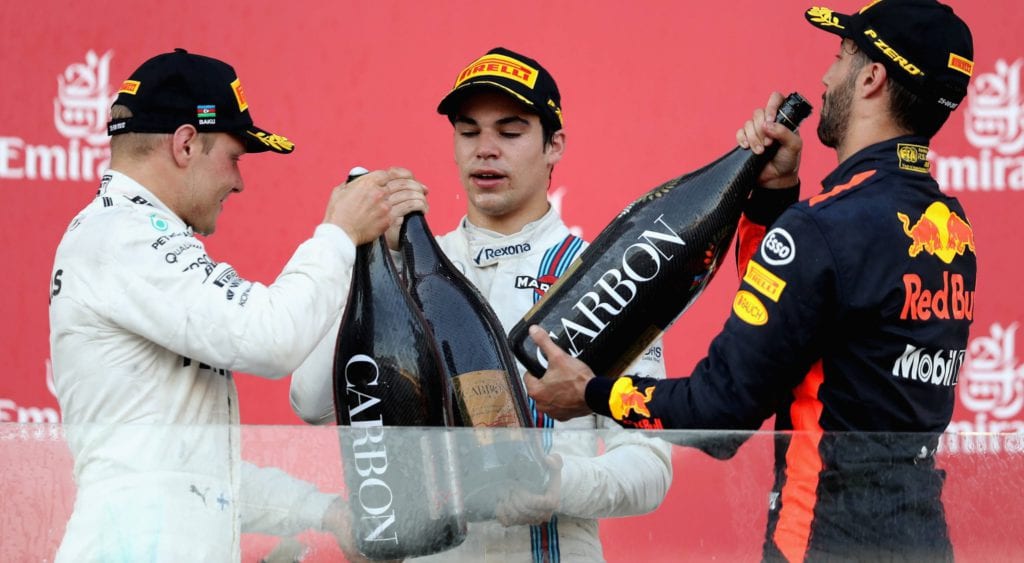