In 2009, FIA president Max Mosley announced that F1 would enforce a $40 million budget cap in order to make it easier for smaller teams to compete with the might of manufacturer money. The FIA also wanted to see the return of a full 13-team grid for 2010 and invited applications for some new teams to enter, with the newcomers being promised some performance breaks to help get them to a competitive level sooner.

Many teams were enticed by the proposal and threw in an application, with three eventually being successful (a fourth team was granted a spot later on when BMW announced it wouldn’t be around in 2010). Some big names failed to make the cut – Lola, Prodrive, Epsilon Euskadi, a team using the ‘Brabham’ name, and the mysterious Stefan GP (which planned to use Toyota’s unraced TF110 chassis) all missed out.

However, there was a slight problem for those that were accepted. Shortly after they’d been granted an entry, the budget cap plan which had been so enticing them was completely dropped following a huge backlash (and the threat of a breakaway series) from many of the existing teams. The four new outfits had the promise of being able to compete with a smaller budget pulled from under their feet and were suddenly left to try and develop and build an F1 car from scratch within a year and be expected to be competitive.

Three of those teams made it – albeit only just in a couple of cases. Lotus Racing – a Malaysian outfit run by airline entrepreneur Tony Fernandes – was the final team to be accepted and the only one that reached the grid for the first race of 2010 under the same name it had entered with. After subsequent name changes to Team Lotus and Caterham, it disappeared at the end of the 2014 season.

Spanish team Campos Racing was going to enter F1 using cars built buy Dallara, but hit money issues before the season had even started and was sold off, becoming Hispania Racing just a few weeks before the season opener in Bahrain. After another ownership change in 2011, HRT disappeared from the grid at the end of 2012.

The most successful (a term I use loosely) of the new teams was Manor Racing. The team was renamed to Virgin Racing following a majority buyout by Richard Branson and although 2010 wasn’t a great season (the car was initially built with a fuel tank too small to get the car through an entire grand prix distance) performances eventually picked up. The team also went through a couple of name changes (Marussia from 2012-15, and back to Manor for its final season in 2016) but was the only one of the ‘new’ teams to ever actually score points.

The fourth of the new entrants to the 2010 season never even made it to the grid. The name? US F1 Team.

An American team run by former Haas Nascar engineer Ken Anderson and British journalist and former Williams man Peter Windsor, US F1 appeared to be a pretty serious effort. The team had a factory in North Carolina and publicly documented some of its progress on its YouTube channel – which, 10 years ago, was something of a forward-thinking idea.

The team also had ambitious plans for its driver line-up and wanted to put a couple of Americans in the car. Initially, one of the names being targeted early on was Danica Patrick, who’d almost won the Indy 500 as a rookie in 2005 and, in 2008, had become the first female driver to win an IndyCar event.

However, it turned out that she’d never even been contacted by the team and had no interest anyway as she was quite comfortable staying right where she was.

This is probably the reason why the team then decided not to go with American drivers to begin with – presumably, none of the seriously quick guys fancied giving up top seats in the likes of IndyCar and Nascar to take a punt on an unknown F1 team which had no guarantees of even being on the grid – but more of that later.

Instead, US F1 hired GP2 race-winner (and future multiple World Touring Car champion) Jose Maria Lopez to drive one of the cars, with ex-Honda test driver James Rossiter slated to be his teammate.

However, they never even got to sit in the car… because there was no car to sit in.

On the surface, US F1 gave off the appearance that everything was running smoothly – the team even had backing from YouTube co-founder Chad Hurley. But, behind the scenes, it turns out that almost nothing was happening.

Early in 2010, interviews with anonymous team employees began to emerge stating that the production of the car had slowed to an absolute halt, courtesy of mismanagement from Anderson. There was even a story that during a team meeting, every single person put their hands up when asked by Anderson ‘Who doesn’t think we’ll be on the grid in Bahrain?’. Ouch.

This got the attention of the FIA, who sent Charlie Whiting to check out the factory. His verdict? The team was in “no position to race” at all.

Investors jumped ship and at a time when US F1 should have been with the other teams testing in Barcelona. Employees were laid off, the factory shut down and the entire project collapsed.

Or did it? The team’s final tweet suggested otherwise.

The US F1 Team web server is down and is being repaired as this is written. We are not gone, as many have reported. More news soon.

Forget Mika Hakkinen’s never-ending sabbatical – this is the comeback we’re all waiting for. Will the enforced hiatus end? Will US F1 rock up to 2021 pre-season testing with a stars-and-stripes livery and a racy all-American driver line-up of Josef Newgarden and Alexander Rossi?

No. In June that year, the FIA fined what was left US F1 and flat-out banned it from competing. The Twitter and YouTube accounts are still up, though, if you fancy a look back into the past charades of a failed F1 team. 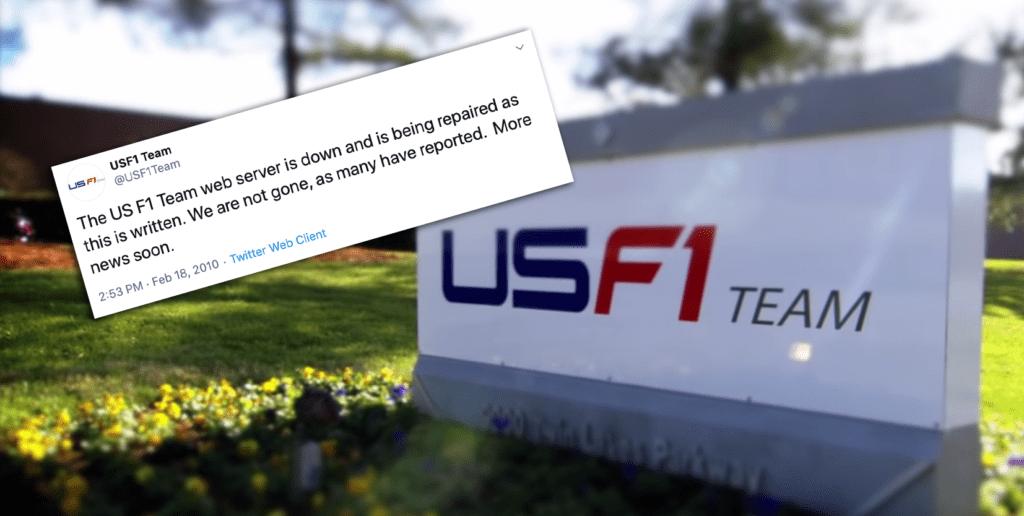