The First F2 Race At Monza Was Decided By An Epic Two-Lap Shootout – WTF1
Skip to content
×
Juniors , News

Even when conditions are dry, F2 is usually pretty exciting, so you can imagine the chaos and drama that was thrown up by the wet feature race at the Monza circuit.

A whole lot of rain delayed F1’s qualifying session, so F2’s main event was pushed way back into the afternoon. But, it did eventually go ahead and what a race it was.

The final two laps were particularly spectacular, after a late safety car. The field was bunched up, the conditions were slippery and stakes were high.

Nyck de Vries led championship leader Charles Leclerc on the restart, but Leclerc made a rare error and was one of several drivers going off-track on the penultimate tour of Monza.

Luca Ghiotto snatched the chance and stormed into first place, having to fend off de Vries and even cutting the first chicane in the process.

A delayed de Vries then clashed with Leclerc, which pushed him into the barrier, and both drivers dropped rapidly down the order.

Ghiotto emerged clear, while Antonio Fuoco and Nobuharu Matsushita picked up the pieces. It wasn’t the cleanest race but it was absolutely incredible to watch. 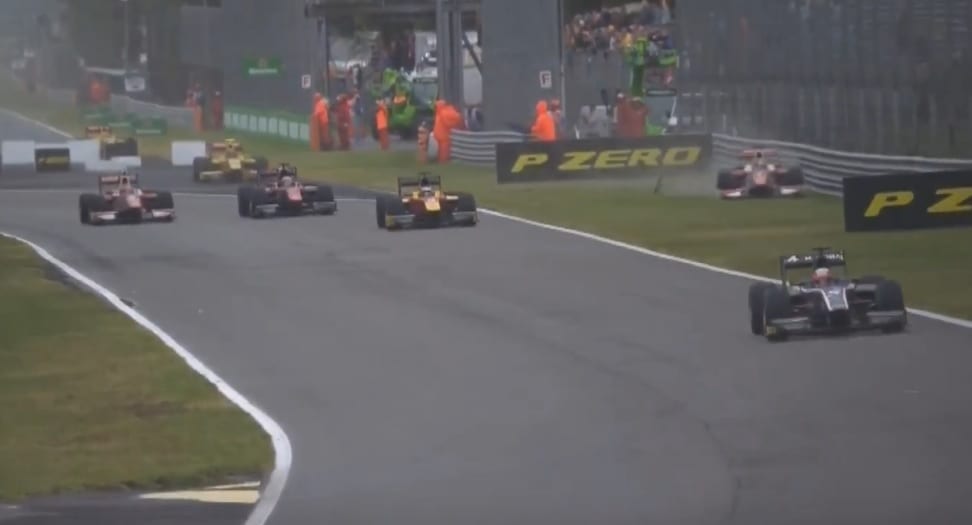