Formula E races being totally unpredictable and chaotic? Surely not. The all-electric World Championship returned to the streets of Rome, Italy, for a bonkers and action-packed E-Prix that saw DS Techeetah’s Jean-Eric Vergne take his first victory of the season.

The race day had been filled with drama since the start. At the end of FP1, Oliver Turvey didn’t get the memo about drivers participating in practice starts on the grid, smashing into the back of a couple of cars, including today’s race winner Jean-Eric Vergne.

Things went from bad to worse for the drivers when race control issued a red flag during the second – and final – practice session to work on a piece of kurbing that had dislodged itself from the track. The kurb was removed and replaced with a concrete wall, but Formula E never resumed the practice session before qualifying got underway.

Stoffel Vandoorne managed to put his Silver Arrow on pole *Mercedes dominance intensifies*, but his lead was short-lived.

After starting the race behind a safety car due to the damp track conditions, the race finally got underway, but after just a few turns race leader Vandoorne and Andre Lotterer came together. COME ON LADS WE’VE ONLY JUST GOT THE GREEN LIGHT.

Lotterer was later penalised for the incident, with Stoffel making up a stunning recovery drive before the predictable drama in the last few minutes of the race. Lucas di Grassi – who had passed JEV in an incredible overtake for the lead just a few laps prior – had a sudden issue with his car and lost all power.

Being at the front of the grid, all remaining cars in the race had to pass his dead Audi off the racing line. It all seemed to be going smoothly before Vandoorne’s car hit what appeared to be a loose drain cover and lost control of his Mercedes.

Live timings and how to watch the race 👉 https://t.co/sHOKGxvLZW#RomeEPrix pic.twitter.com/qAEQd705lp

He spun uncontrollably across the track, smashing into his Mercedes teammate Nyck de Vries, and ended up retiring from the race as a result of the smash. Not ideal, especially when Toto Wolff had made the journey to see how the team performed this weekend.

When race leaders weren’t breaking down or cars seemed to be wiping out half the field, the racing remained massively competitive, as you come to expect from a Formula E race.

A battle at the front of the field resulted in two-time Formula E champ Jean-Eric taking his first win of the season, with Jaguar Racing earning their first-ever double podium finish. However, the race was ended behind the safety car as a result of Vandoorne’s untimely crash and meant fans didn’t get to see the spicy battle to the chequered flag.

How it started How it’s going pic.twitter.com/quuYgXjqi1

Nissan’s Oliver Rowland looked on for a great result, leading the pack in the early laps after the drama between Stoffel and Andre. Unfortunately, Rowland was slapped with a drive-through penalty for ‘power overuse’ and never really recovered.

Sounds totally bonkers? That’s because it was.
The best part of it all? Formula E is back for another race tomorrow! 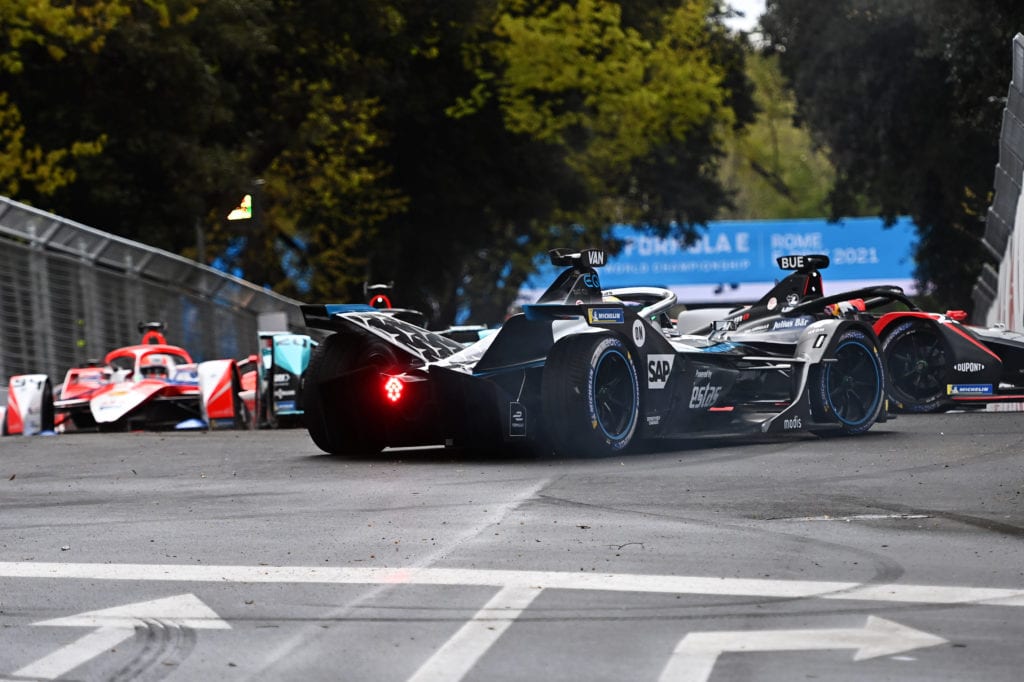