The German GP Surely Had To Be One Of The Greatest Races Ever – WTF1
Skip to content
×
Formula 1 , News

Where do you even begin to write a report about a race like that? When rain descends on a grand prix you know that something good is going to happen, but could anybody have predicted a race as wild as that?

The start of the race was relatively normal as Lewis Hamilton led Valtteri Bottas and the slow-starting Max Verstappen as the field quickly ditched their full wets for intermediates. Both Ferrari drivers made good progress – Sebastian Vettel quickly made his way up into the points, while Charles Leclerc wasted little time in moving up to fourth. Sergio Perez binned his Force India, Daniel Ricciardo’s engine blew, and Lando Norris stopped with some kind of technical issue.

Then the true madness started.

Drivers started switching to slicks, only to realise that much of the track – particularly the treacherous final sector – was still hella slippery. Verstappen had gone onto the medium tyres and spun, while Leclerc had managed to move up to second through the pit stop cycle. With the track drying and a fast car underneath him, he suddenly looked like a threat for victory… until he ran wide in the last corner (not for the first time), slid across the drag strip, hit the barriers, and was out.

The safety car was deployed and then, moments later, Hamilton did the same thing. He was able to keep going but had to pit for a damaged front wing, cutting across the pit entry in the process and earning himself a five-second penalty. In the mayhem, Verstappen had snuck back into the pits for intermediate tyres, a move which not only gained him the lead, but put him back on the correct tyres.

Nico Hulkenberg was another driver who’d moved through the field (as you’d expect him to do in such conditions) and looked like he might be able to fight for a podium. Unfortunately, as often happens when Hulkenberg gets himself into good positions, he promptly crashed – again at the final corner.

Verstappen had built up a big ol’ lead and when the safety car came out to recover the Renault he pitted again, staying in front of Bottas, Hamilton and Alex Albon, and was able to stretch out a lead again on the fresh intermediates.

However, at the back of the field, Lance Stroll took a gamble and pitted for slicks. It worked a peach – on the following lap Daniil Kvyat and Sebastian Vettel followed suit, triggering the rest of the field into stopping. Stroll briefly led before Verstappen regained his position at the front, while Hamilton’s penalty caused him to drop right out of the points. He then had a dramatic spin at Turn 1 and had to stop again to replace his flat-spotted tyres.

Up at the front, Kvyat made his way in the second while, slightly surprisingly, Stroll was able to hold off Bottas for the final podium spot with relative ease. Then, just like his teammate had done, Bottas spun at Turn 1 – only unlike Hamilton, he ended up in the wall. Cue another safety car.

Verstappen retained the lead and went on to win for the second time in three races, while Vettel charged through to finish a remarkable second, having started the race 20th. Perhaps the person we’re all the happiest for, however, was Kvyat. After all he’s gone through in his career, he became only the second driver after Vettel to put a Toro Rosso on the podium – and just a day after the birth of his daughter, too.

Stroll’s tyre gamble may not have resulted in a podium but fourth is still a mega result, with Carlos Sainz (who at one point was in the barriers at the final corner himself and had to reverse out) recovering to fifth. Alex Albon ended up sixth after twice passing Pierre Gasly during the race, and then having a clash with the Red Bull driver in the closing laps. Gasly – who was the only Red Bull driver who never really looked like a podium possibility during the race – stopped his car at the side of the track, and you have to wonder whether his time is running out rather quicker than expected. In fact, he’s probably the only person unhappy to see Kvyat on the podium…

The two Alfa Romeos finished seventh and eighth (but are currently under investigation for a technical infringement) with the Haas drivers (who made contact again during the race) ninth and tenth, Romain Grosjean ahead of Kevin Magnussen. Hamilton could only finish 11th, ahead of the two Williams drivers.

Austria was a very entertaining race. Silverstone was utterly superb. But this? This has to go down as an all-time classic. The winner made a terrible start and had a spin. The guy in second started last. Kvyat’s third was a fairytale story of vindication and redemption. The championship leader threw and his teammate and main title rival threw it all away. So did the Ferrari young gun, as well as – well, if I sat here and listed ever driver who could have had a great result, but didn’t, I’d be here all night.

Now excuse me while I go and watch it all again. 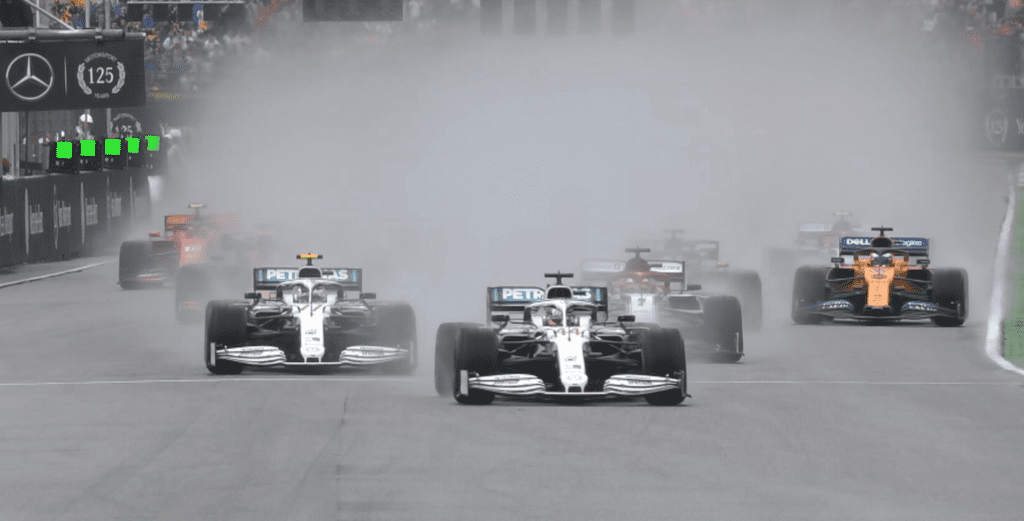