The IndyCar Race At Mid-Ohio Had A Ridiculously Exciting Finish

After watching a race as good as the German GP, tuning into IndyCar later that day wasn’t something I was particularly excited for – after all, how could anything get close to what we’d just seen in Hockenheim!?

I needn’t have worried. As the race neared its conclusion, a thoroughly interesting scenario was beginning to pan out. Scott Dixon had been comfortably leading but was having to manage both his fuel and rapidly degrading tyres. Teammate Felix Rosenqvist was catching him, as were a train of backmarkers stuck behind Dixon. Rosenqvist had to lap the cars to get to Dixon (the blue flag rules in IndyCar are much more relaxed, remember), while Dixon had to manage his car and avoid those behind him unlapping themselves.

To complicate matters even further, third-placed Ryan Hunter-Reay was catching the lot of them. The result was a sensational final few laps.

Skip to the 2:40 mark if you just want to watch the last laps

It’s pretty great, right? But if you don’t follow IndyCar then wait – because the context of the situation makes it even better.

Dixon is currently trying to make inroads into Josef Newgarden’s championship lead and realistically needs wins to do it. Rosenqvist is not a title contender and, as Dixon’s teammate at Chip Ganassi Racing, you’d have expected the team to tell him not to attack.

If this was F1? Maybe – but instead, Rosenqvist (a series rookie who’d never finished on the podium, let alone won) was told to go for it – as long as it was clean. As you can see, it wasn’t exactly clean!

Although Dixon would cut the points deficit slightly, he’s ‘only’ fourth in the championship; Newgarden was set to make championship gains on closer rivals Alexander Rossi and Simon Pagenaud. And yet, he still opted to attack and go for the low percentage move on Hunter-Reay and go for third, a decision which cost him 16 points.

Wow. On the final lap, @JosefNewgarden lost it in the Keyhole at @Mid_Ohio.

That will help @AlexanderRossi move to only 16 points down in the championship race. #Honda200 // #INDYCAR pic.twitter.com/o5sIt1cidu

After a finish like that, you might expect Dixon to be angry with Rosenqvist for being too aggressive, and Newgarden to blame Hunter-Reay for squeezing him. But nope – instead, the two CGR drivers simply praised each other. Dixon said he had huge respect to his young teammate for giving it a go, while Rosenqvist said he enjoyed the “hard but fair” scrap. Newgarden, meanwhile, simply said he made a silly error with a “low reward, high risk’ move.

You’ve gotta love the attitude to racing that IndyCar drivers have. And from a more general perspective… isn’t motorsport just the best? 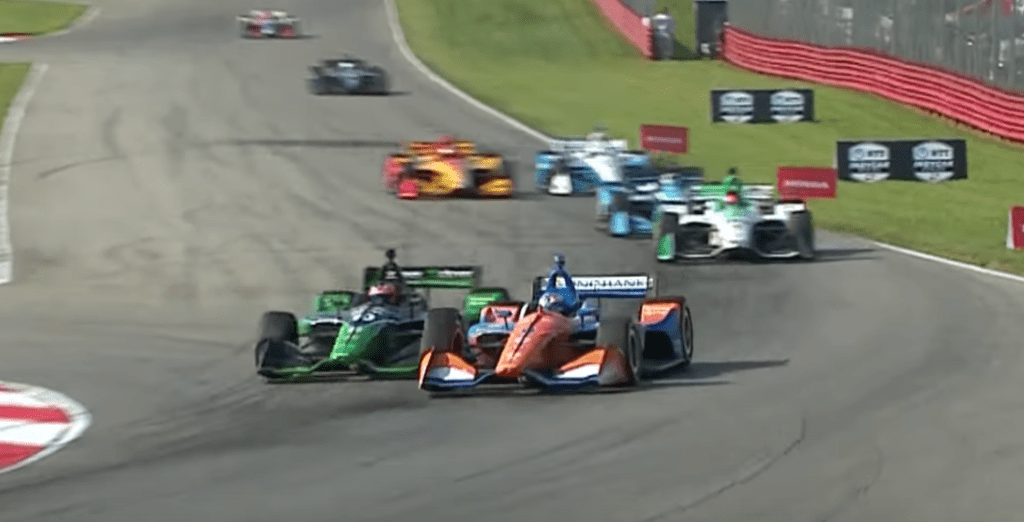