The Marrakesh Formula E Race Was Unusually Calm… Until The End

The third round of Formula E season four took place on the semi-permanent Marrakesh street circuit in Morocco and, unusually for Formula E, it was a fairly standard race with a relatively low level of chaos – perhaps because this is (along with Mexico) the closest the series gets to a ‘proper’ track.

The opening laps saw Daniel Abt make contact with Alex Lynn during a slightly optimistic move for which he was later penalised. From then on, though, things were entertaining not because it was absolute carnage, but because there was just some genuinely good racing going on, with plenty of quality overtakes, like this one from Oliver Turvey on Nick Heidfeld.

Around the time of the pitstops came a full-course yellow to retrieve Andre Lotterer’s stricken Techeetah car. Felix Rosenqvist had been running in second right behind leader Sebastien Buemi, but lost a couple of vital seconds during the car swap.

He slowly closed back up and after sitting behind Buemi for a while launched an attack for the lead with just a few laps to go.

Buemi was one of the drivers who’d been awarded Fanboost and therefore should have had the power to fight back, but Rosenqvist gapped him in the space of a few corners and the battle was over. After the race Buemi said he’d tried to use his Fanboost, but it was broken and didn’t work. Remind me why it’s is still a thing again…?

Whilst the action at the front was clean, the midfield eventually remembered that this was a Formula E race and something bonkers had to happen. Maro Engel attempted a move on Nick Heidfeld, whilst Eduardo Mortara tried to pass Engel and just ended up knocking his teammate into Heidfeld.

It was just a little bit messy – Mortara was out and Engel was given a post-race penalty. Heidfeld managed to finish seventh, despite suffering bodywork damage in the incident.

Up ahead Rosenqvist cruised to his third Formula E victory and second in a row. Buemi finished second and Sam Bird faded to third, just staying ahead of a charging Nelson Piquet Jr. Reigning champion Lucas Di Grassi’s ‘mare of a season continued when he retired from the front-running group. Three races in and he’s yet to score a point…

Felix Rosenqvist finishes with a hard-fought win in the #MarrakeshEPrix! 🏁 pic.twitter.com/RXQDWmR3YJ

For Rosenqvist the result puts him top of the drivers’ championship. In fact, the only foot he put wrong (apart from a slightly scruffy quali lap) was celebrating on the way to the podium…

Well, that could have been embarrassing! 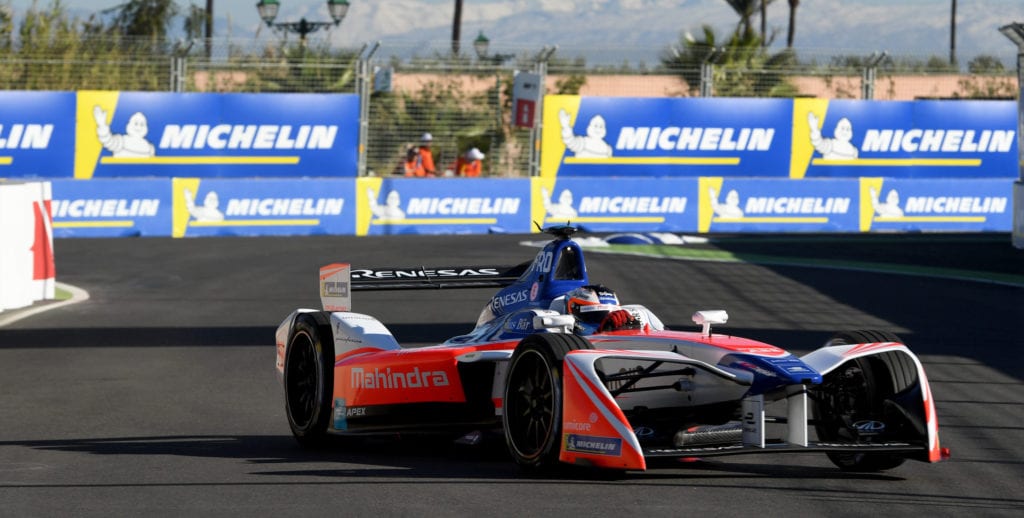