Wehrlein had led the whole way from pole but found himself struggling badly in the closing laps. Not only were his tyres starting to go off, but he was also up against it with his remaining energy and di Grassi was all over him.

In just his third race, Wehrlein was driving superbly, defending firmly but fairly despite having to do an enormous amount of lifting and coasting. On the final lap, di Grassi made a move into the first chicane – there was a light touch, Wehrlein cut the chicane and carried on ahead. Di Grassi caught back up and going through the final sector – well, this happened.

Seriously, is it actually possible for the end of a race to be more exciting than that!? Di Grassi’s experience really seemed to pay off while poor Pascal didn’t even get to enjoy second – he was given a five-second post-race penalty for cutting the chicane and dropped to sixth. That promoted Antonio Felix da Costa to second (despite driving most of the race with bent steering) and Edoardo Mortara to third. Jerome d’Ambrosio finished fourth, having started 18th.

While you’re sparing a thought for Wehrlein, throw one in for Oliver Rowland, too. He made a brutal lunge on the first lap to go from fourth to second and then hassled the Mahindra driver for the lead for almost the entire race, only to drop to third when he made a slight mistake with his Attack Mode activation. He didn’t even get to pick up any points – an apparent miscalculation from his Nissan team saw Rowland (and teammate Sebastien Buemi) run out of useable energy with a lap to go.

.@oliverrowland1 struggled with engaging ATTACK MODE and makes contact with his teammate in the closing stages of the #MexicoCityEPrix pic.twitter.com/boNQbdac1D

The big story of the race was going to be the accident on the third lap between Jean-Eric Vergne and Nelson Piquet Jr. Piquet tried to go up the inside, Vergne defended, their wheels made contact and Piquet’s Jaguar was sent spectacularly flying into the barriers, taking Alexander Sims with him. That brought out the red flags and while Vergne and Sims got back in the race, Piquet was out, though thankfully perfectly OK.

As a race, the Mexico City ePrix always seems to deliver, but this was just ridiculous. In fact, this whole season is ridiculous – four races in and we’ve had four different winners from four different teams. D’Ambrosio narrowly leads the championship from da Costa and Sam Bird but given the number of talented drivers who’ve yet to even grace the podium this season, the title fight is still almost literally anyone’s. 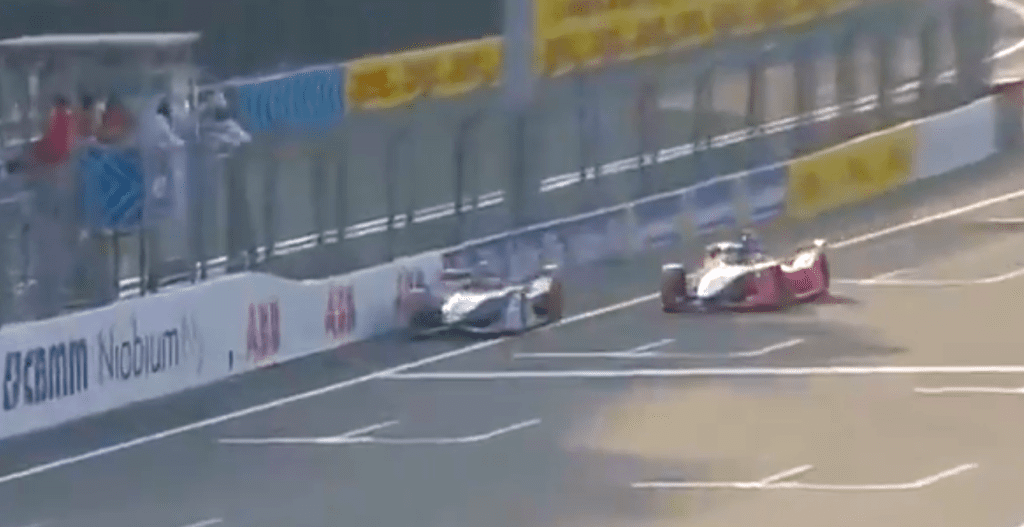