The Most Memorable Moments From F1 In Portugal

Hooray, race week is finally here with F1 making a welcomed return to Portugal after a 24-year absence from the calendar. It is being revived for a one-off race at the Algarve International Circuit in Portimão, and we are super excited to see F1 at another unexpected venue this season.

Here is a look back at what’s happened in previous Portuguese Grands Prix.

Despite the fact F1 hasn’t held a Portuguese Grand Prix since 1996, it has only been just over a decade since F1 last visited Portugal and the Algarve circuit in Portimão. The 4.6-kilometre track hosted F1 Testing in both 2008 and 2009, and in recent years was talked about as a possible new venue for future F1 races.

Nobody ever expected the return of Portugal on the calendar to come in 2020 though, with this race being a temporary stand-in after the season was heavily restructured due to the ongoing COVID-19 pandemic.

Back when F1 did host a Portuguese Grand Prix, it was everyone’s favourite lover of controversial opinions, Jacques Villeneuve, who took victory at Estoril in 1996. This race was the penultimate round of the championship, which went on to see Damon Hill crowned drivers’ champion.

Hill set the 20th pole position of his career that day, with Villeneuve in second. However, a poor start for Jacques meant he dropped to 4th on the first lap. This move placed him behind that of Michael Schumacher, whom Villeneuve passed in an absolute beaut of an overtake. A quick pit stop later in the race placed Villeneuve ahead of Hill, resulting in him winning the race and taking the championship down to the final race at Suzuka.

F1 would host 13 consecutive races at the Estoril circuit, one of them being Ayrton Senna’s very first win and pole position in 1985 for Lotus. That race, which goes down as a classic, saw torrential rain cause mayhem among the drivers and ended a few laps earlier than scheduled as a result.

Senna would go on to win  by a whopping +1:02.978s ahead of second-place Michele Alboreto: a Senna masterclass on how to drive in the wet.

Other notable moments decided during a Portuguese GP included the 1984 Grand Prix, which saw a heated season finale battle between teammates Niki Lauda and Alain Prost. Lauda won the championship, by just half a championship point.

Imagine losing a championship by half a point!

Senna and Prost also had an impressive fight at the 1990 race, battling for second place. Nigel Mansell started from pole, but a bad start with too much wheelspin saw him almost take out then-teammate Prost. Mansell fought back though and soon found himself in the lead again until he was almost taken out by a lapped car.

On lap 52, Mansell in the Ferrari was attempting to pass the Ligier of Philippe Alliot when Alliot stuck to the racing line and hit the front of Mansell’s car. Alliot was sent spinning into the barrier, and fortunately, Mansell escaped and won the race. The move led to some classic James Hunt savage commentary claiming “The man who crashes at every Grand Prix anyway, has taken himself out.”

Senna and Prost battled for the second position during the race, but it was Senna who finished ahead. Senna would go on to win his second drivers’ title later that year.

Prost holds the record for being one of the most successful drivers at the Portuguese Grand Prix, winning there three times in 1984, 1987 and 1988. Mansell was also a three-time repeat winner at Estoril, celebrating victories at 1986, 1990 and 1992 races respectively.

Williams has the most wins at Portugal as a constructor, with a total of six wins. Making it seven this weekend is probably unlikely.

Stirling Moss won the first official Portuguese Grand Prix when it became part of the F1 World Championship in 1958, and went on to win it the following year too. 1960 also became the first race for F1 legend Jim Clark to score his first podium.

Are you looking forward to F1 racing at Portimão? Let us know in the comments below. 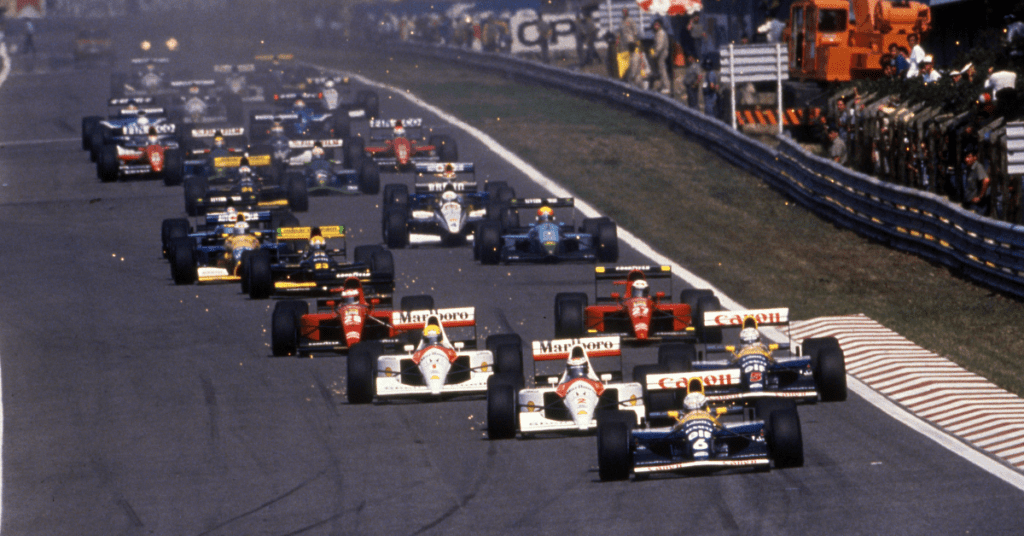