The New F1 Safety Car Is The Most Powerful Ever – WTF1
Skip to content
×
Formula 1 , News

The New F1 Safety Car Is The Most Powerful Ever

A shiny new Mercedes-AMG GT R will be used as the safety car for the 2018 Formula 1 World Championship, the most powerful car ever used in this capacity. The car boasts a cool 585bhp and a top speed of 318km/h and will give the recurring safety car driver Bernd Maylander plenty to play with.

Whenever the safety car is deployed in a Grand Prix, the pace of the competitors is significantly reduced and as spectators, we are prone to fall into the assumption that the safety car leading the pack is sluggish and heavy. This is true in the context of F1 cars, but Maylander does have to thrash the Mercedes around the circuit to maintain a respectable pace. He sounds like he is looking forward to getting behind the wheel of the new Mercedes AMG GT-R in real conditions having tested the car at the Nurburgring.

“I am very much looking forward to my new company car. It is an absolute highlight in terms of driving dynamics and is one level higher up still than the AMG GT S of recent years. Of course, ideally the safety car should be deployed as rarely as possible – but when we have to safely bunch up the Formula 1 field and lead it around the track, we will be superbly equipped with the AMG GT R.”

Mercedes Daimler has provided F1‘s safety cars since the 1996 season with the C36 AMG, but this year’s model boasts a spectrum of advanced Motorsport technology and gadgets, including active rear-wheel steering, a nine-way adjustable traction control system, low-weight ceramic compound brakes, all powered by a 4.0-litre V8 biturbo engine. Add to this the wind tunnel approved, extensive aerodynamic features on the car and we have a pretty stunning vehicle serving as the safety car this season.

Given the high-yield of safety car deployments during the Australian Grand Prix at Albert Park, and it’s very likely that we will see the AMG GT R in action this weekend. With 585bhp at its disposal, the window of time in which the leading F1 driver picks their “moment” on the restart just got a little bit smaller. 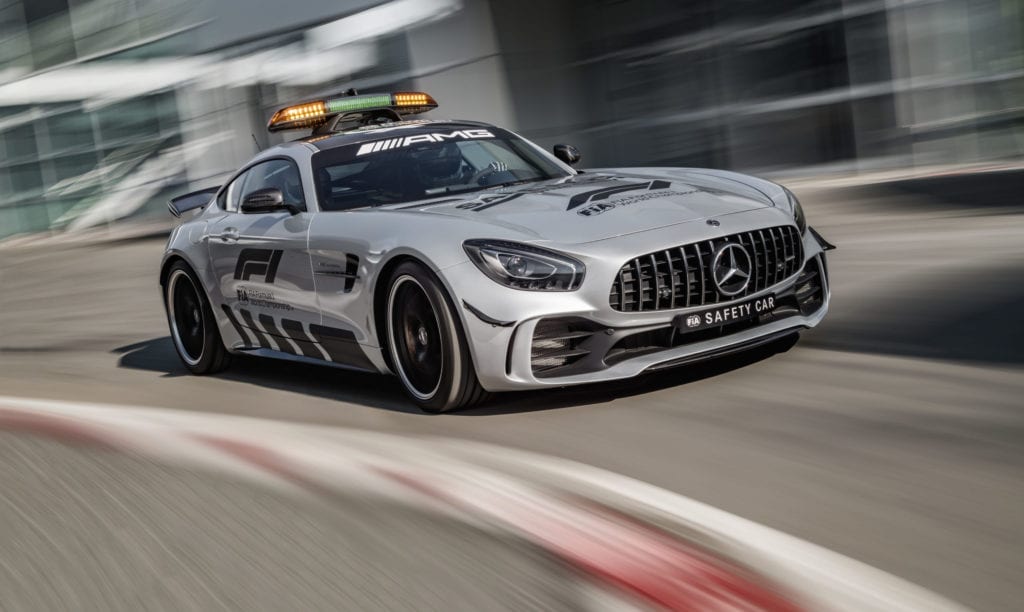