Spa is one of the tracks where it’s often said that you can experience four seasons in one day. Whatever the time of year, it’s always possible that bright sunshine can turn into a heavy downpour with a snap of the fingers – and not always one which covers the entire track.

But at this weekend’s WEC round, the weather forecast incredibly said that race day would be hit with snow. In May! It wasn’t just because they’d got an intern to do the forecasts, either – when they turned up to the track it was indeed covered in a gentle dusting of the white stuff.

By the start of the race it had all disappeared, though, and we were left with what was surely going to be a regular dry race.

It’s race time! The TOTAL 6 Hours of Spa-Francorchamps is go, race hard, race fair and give it all you’ve got #WEC racers!#6HSPA pic.twitter.com/YasWp4h5Lq

Nope. Literally minutes later a storm blew in and before long the snow was falling again. And that’s pretty much how the race went as weather conditions cycled between clear and sunny to wet and windy as virtually every form of water fell from the skies: rain, snow, sleet, hail – you name it.

Never mind four seasons in a day – Spa was experiencing seasons that haven’t yet been discovered by humans; it made for some superb images.

Following a number of safety cars as conditions flitted between wet and dry, the race was eventually stopped with just 10 minutes left to run. The No.8 Toyota of Kazuki Nakajima, Sebastien Buemi and Fernando Alonso won the race after the sister car hit some troubles mid-race and could only end up sixth. Toyota clinched the LMP1 teams’ title (not especially surprising) while the No.8 crew is now right on the cusp of clinching the drivers’ championship – pretty much anything other than a retirement at Le Mans will see Buemi win his second crown, and Nakajima and Alonso their first.

Oh, and if the weather conditions weren’t enough of a story, the LMP2 category was won by the No.31 DragonSpeed car of Anthony Davidson, Roberto Gonzalez, and… Pastor Maldonado. 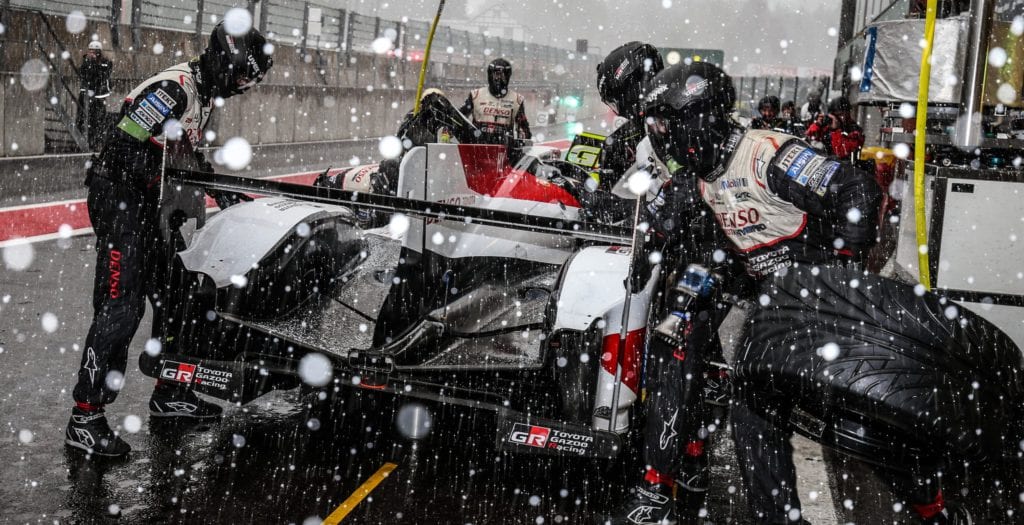