The Porsche Carrera Cup Race At Le Mans Had An Epic Last Lap Battle For The Win - WTF1
Skip to content
×
Endurance , GT

There are a couple of support races in the build up to the Le Mans 24 Hours, one of which is the Porsche Carrera Cup race. It draws together some of the biggest names and teams from various Porsche Carrera Cup championships around the world for one massive 61-car race.

Of course, a one-make championship filled with literally dozens of the series’ top drivers is going to lead to a closely-fought race, especially somewhere with as many long straights as Le Mans, and so it proved to be the case this year.

Going onto the last lap four drivers – Dan Cammish, Ayhancan Güven, Alessio Rovera and Dino Zamparelli – found themselves battling it out for the victory, and as you’d expect there was plenty of action.

In the end it was Cammish (yep, he’s the guy who won every race in a Formula Ford season in 2013) who came out on top after a gutsy move heading into Indianapolis. Zamparelli also squeezed through to second place, making it a 1-2 for British drivers from the British championship.

Of course as it turned out they weren’t the only cars to end up fighting it out on the last lap at Le Mans this weekend! 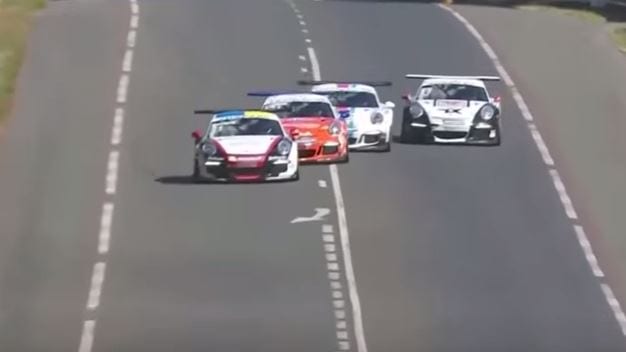