The Records That Have Come To End With Hamilton’s Absence – WTF1
Skip to content
×
Formula 1 , Statistics

The Records That Have Come To End With Hamilton’s Absence

After Hamilton was confirmed to have tested positive for COVID-19, it soon dawned on us that this would be the first time since the 2006 Brazilian Grand Prix that he wouldn’t be taking part in an F1 race weekend. As a result, some of his incredible records have now come to end with him missing the Sakhir Grand Prix.

As much as many of us are hyped to see George Russell in the Mercedes this weekend, it’s a big shame that Lewis Hamilton’s record breaking season may end in such a way if he is unable to make the Abu Dhabi Grand Prix. Even if he does make it back to race next time out, missing Sakhir has put to an end some of Hamilton’s incredible records and may have even stopped a few more from happening.

As we mentioned, Hamilton has taken part in every single Grand Prix since he started his F1 career with McLaren back in 2007. That’s a total of 265 consecutive race starts, the most ever and well ahead of Nico Rosberg who is in second place with his 206 consecutive starts.

With his absence from the Sakhir Grand Prix, this record will come to an end. Hamilton will still have the record though and is a true testament to the reliability he’s had with his McLaren and Mercedes machinery throughout his career.

The only other driver who is currently on the grid that’s close to Hamilton’s record is Renault’s Daniel Ricciardo. He has 186 consecutive starts to his name, which began at the 2011 British Grand Prix and is still ongoing. To beat this record, Ricciardo would need to start another 80 Grand Prix – around another four years worth of races – and not have any reliability woes, illness or retire from the sport.

Hamilton had the ongoing record, with 48 consecutive points-scoring finishes from the 2018 British Grand Prix up until the 2020 Bahrain Grand Prix. He also holds the second spot with 33 races, with no driver on the grid anywhere near beating that record any time soon.

Hamilton also had 48 consecutive race finishes which lasted the same date range as above, starting at the 2018 British Grand Prix. Again, there are also no drivers on the current grid that are anywhere near this record.

This is not a record currently held by Hamilton, but with his five back-to-back victories this season, and no hints that he was slowing down, he looked in contention to challenge Vettel’s nine-win streak of victories.

Unfortunately, this will now no longer be possible with these existing wins but his five wins in a row (which he also set in 2014) does put him joint sixth on the list alongside Michael Schumacher, Nigel Mansell, Jim Clark and Jack Brabham. Winning the last two races of the year would have but him joint second on that list.

Hamilton will also not be able to break Alberto Ascari’s record for the highest percentages of wins in a season. Ascari’s record, that was set in 1952, saw him win six of the eight races on the calendar – giving him a 75% win record. If Hamilton went on to win in Sakhir and the finale in Abu Dhabi, he’d have taken 13 wins from 17 races, which would have given him a 76.47% record.

With 98 poles, Hamilton will also not be able to get to 100 pole positions before the end of the season and instead will likely hit this milestone in 2021.

During the Sakhir Grand Prix weekend, lap times are also being predicted at being at under a minute. With one of the fastest cars in F1’s 70 year history, many believed that Hamilton could have beaten the previous fastest lap time set by Niki Lauda around Dijon-Prenois in 1974 at a crazy time of 58.79s. All eyes will now be on Valtteri Bottas and George Russell in the Mercedes. 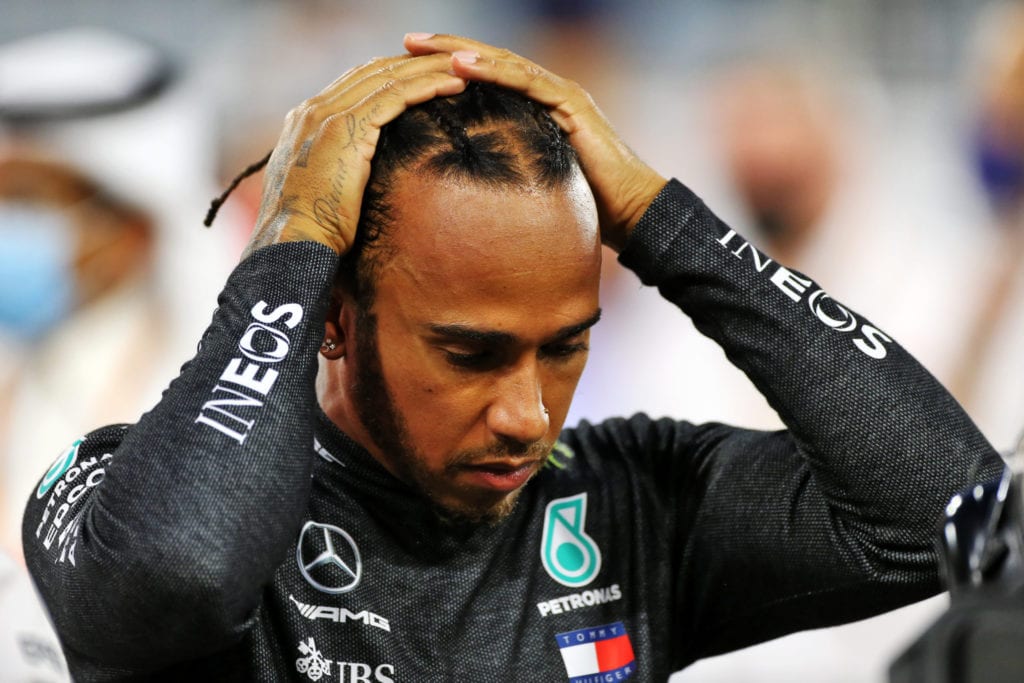