The Stats Behind Winning The First Race Of The Season

Bottas has kicked off 2019 with a perfect 26-point score. In the race he looked imperious, pulling out the gap at will, managing his tyres superbly and having plenty of pace in hand to snatch the fastest lap seemingly whenever he felt like it. On top of that, his whole attitude to racing appears to have dramatically changed.

Is he going to be a proper title contender in 2019? In terms of this season, it’s far too early to tell, especially because his probable rivals had all sorts of issues – Lewis Hamilton with minor car damage and a sub-par strategy, and Ferrari with unexpectedly slow pace which is predicted to just be a one-off. However, if you look back through the history of the first race of the season, you might get an idea of Bottas’s chances of success – not just for this year, but for his entire career.

Considering that we’ve had 69 complete seasons, that’s almost a complete 50/50 split. So, flip a coin – if it’s heads, Bottas will be champion. If it’s tails, then he won’t be, right?

Obviously not. Shrink the sample size down to all seasons where Albert Park hosted the season opener (which is every year since 1996, apart from 2006 and 2010 when Bahrain was the first race) and Bottas’s chances improve slightly – on 12 occasions the winner has gone on to become champion, compared to nine where they haven’t. However, this decade alone is where most of those nine come from – since 2010, only Sebastian Vettel (2011), Hamilton (2015) and Nico Rosberg (2016) have won the first race and the title.

Maths enthusiasts among you will note that if the winner of the first race has won the title on 34 out of 39 occasions, then that means they haven’t succeeded on 35 occasions. And you’d be wrong! It’s actually 36 times. That’s because in 1956, the first race was actually a shared victory between Juan Manuel Fangio and Luigi Musso. Fangio went on to take the title while Musso ended up 11th after driving in just three more races that year, all of which he retired from.

On 18 of those 36 occasions, the race was won by a driver who’d already won the championship in a previous year. This obviously doesn’t apply to Bottas – he fits into the other half of drivers, which we’re conveniently going to dive into now.

Bottas will be desperate to avoid becoming the 10th driver to slot into this category, though if he fails this season it’ll probably be a few years before we know if he does or not.

First up is Piero Taruffi, who won the first race of 1952. Next up is someone we’ve already mentioned – Luigi Musso. Musso’s shared win with Fangio was the only one of his career and after a smattering of second places over the next couple of years was killed in a crash halfway through 1958.

Stirling Moss won the season-opening race twice (in 1958 and 1961) while Bruce McLaren achieved the feat in 1960. Pedro Rodriguez is next up in 1967, and then in 1979 you get to Jacques Laffite – he actually won the first two races that year, yet ended up fourth in the championship and would never win a title.

Along with Moss, the other driver to win the opening race twice and yet never win the title is David Coulthard. He won the Australian GP in 1997 and 2003 (coincidentally his first and last wins for McLaren) but ended up third and seventh in the championship respectively. Eddie Irvine won the 1999 race and became a surprise title contender after Schumacher was injured in a mid-season crash at Silverstone. He ended up narrowly losing out to Mika Hakkinen and although it proved to be a breakout season, he never came close to a championship again.

Finally, there’s Giancarlo Fisichella, who won in 2005 but was never able to get as much out of his Renault as Fernando Alonso was. Since then, every season opener has been won by someone who either was a champion or would go on to become a champion, meaning it can only be Bottas who becomes the 10th driver in this unfortunate club – for now, anyway.

If he can’t take the title this year, Bottas will be hoping to become a member of this rarest subset – non-champions who won the first race of the season, failed to win that year’s championship, and then finally became a champion in another year.

Jackie Stewart won the first race of the 1966 and then took the first of his three titles in 1969. Mario Andretti won the 1971 South African GP but wouldn’t win a championship until 1971, while Jody Scheckter only had to wait two years after winning the first race of 1977 before he became a champion.

Alain Prost won the first race in 1982 and 1984 and made it third time lucky when he won the first race and the title in 1985. Nigel Mansell triumphed in the season opener in 1989, three years before his 1992 championship. You then have to wait all the way until Nico Rosberg, who won the first race of the hybrid era in 2014 but didn’t take a title until 2016.

Since the Constructors’ Championship began in 1958, the team that won the first race has triumphed on 36 out of 61 occasions. Shrink that down to just the years where the season has begun in Melbourne and it becomes even more likely, with the race correctly ‘predicting’ the champions in 14 of 21 races. A good omen for Mercedes, then…

The drivers with the most success in the first race of the season are hardly surprising, with Schumacher and Prost sharing six wins each. However, while Schumacher won the title in every year where he won the first race, Prost only did so twice, in 1985 and 1993. The only world champions never to win the opening race are all drivers with ‘only’ one title – Mike Hawthorn, Phil Hill, John Surtees, Denny Hulme, Jochen Rindt, James Hunt, Keke Rosberg, and Jacques Villeneuve.

There have also been a couple of interesting streaks. Between 1990 and 1996, the driver who won the first race always also won the championship, with only Benetton’s loss to Williams in 1994 preventing the record from being the same for the constructors’ as well.

The longest streak of it not happening came between 1970 and 1977. Amazingly, all the drivers who won the first race in those years may not have won the title in that year, but they either already were – or would go on to become – champions, a testament to the level of talent and competition in F1 at the time.

As with many statistics, very little. If anything, the most telling stat is that since 2011, only three drivers have won the first race and the championship (and in two of those years – Vettel in 2011 and Hamilton in 2015 – they were seasons of sheer dominance and no real title fight).

This could be because as F1 has become more specialised and the calendar more homogenous, the Australian GP is increasingly becoming an outlier. The track is unlike the majority of others, so a car and a driver that perform well there may not necessarily carry that throughout the rest of the season. The difficulty of overtaking and the high chance of incidents means that entire races regularly turn on the smallest of moments, with little chance of the race returning to the expected order under normal racing conditions.

This year’s race was completely devoid of those so once Bottas got to the first corner first, in reality, it was going to be difficult for anyone to beat him. In isolation, it’s becoming increasingly difficult to judge anything based on what happens at Albert Park.

Then again, as we’ve already mentioned, the entirety of F1 history suggests winning the first race gives you a roughly a 50/50 chance of claiming the crown. After a couple of seasons where that hasn’t happened, maybe it’s time for Bottas to redress the balance. 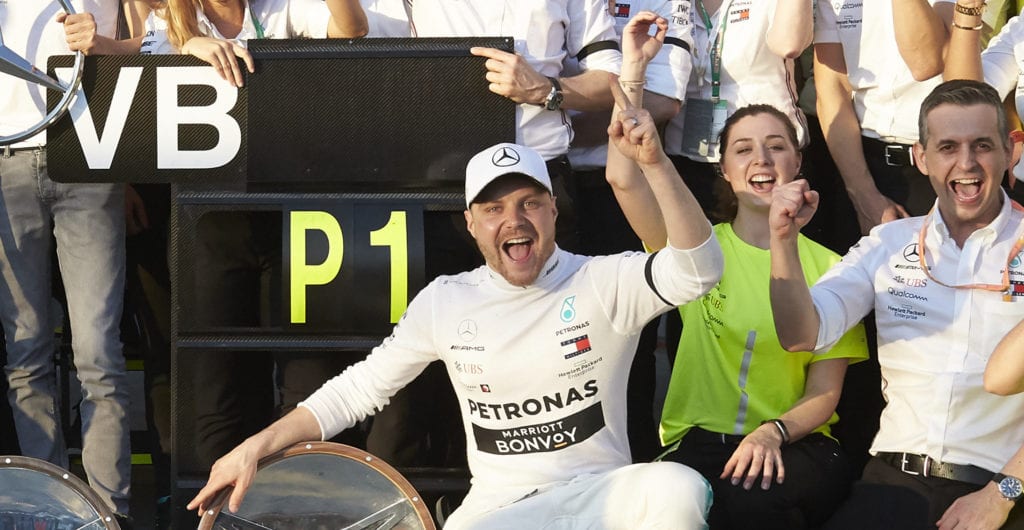