The Supercars Championship Just Had Its Own Version Of Spa ’98

The third race of the 2017 Supercars Championship at the Symmons Plains circuit in Tasmania had its own Spa ‘98 moment as wet conditions contributed to an accident on lap two which involved almost half the field.

The combination of massive spray, low sun and a narrow track meant that the slightest contact between Fabian Coulthard and Rick Kelly set off a chain reaction that most of those behind them simply couldn’t avoid. What is it with Coulthard’s and massive pile-ups in the wet?!

Ouch! One of the biggest impacts happened when Rick Kelly was T-boned by Will Davison, who was tobogganing down the wet grass on the left hand side.

From Davison’s onboard you can see just how quickly things unfolded and how bad the visibility was. He was so close to making it thorough but then suddenly his progress was halted by a Kelly’s car spinning into his path, which he was powerless to avoid.

Amazingly everyone was ok, although Will Davison complained of some back pain and has been taken to hospital for tests. The damage to some of the cars was so significant that there’ll probably be a few of them missing for Sunday’s race.

Unsurprisingly the race was red-flagged and recovery crews spent 50 minutes clearing up the mess. The race was then restarted, but only for one lap behind the safety car, at which point the chequered flag was thrown and Shane van Gisbergen controversially declared the winner, despite only one lap being completed under full racing conditions. 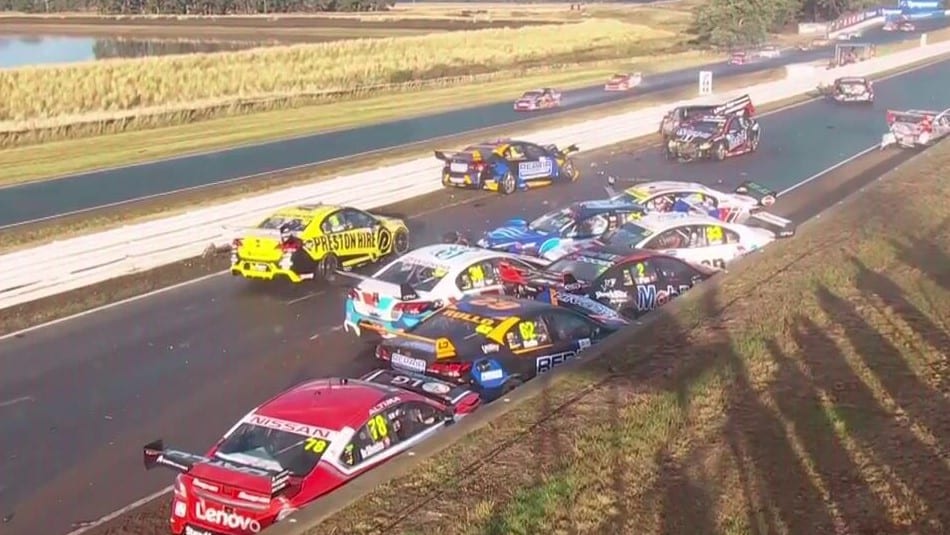