The Top Three Had Some Great Banter About Whether Alonso Should Return To F1 – WTF1
Skip to content
×
Formula 1 , Fun

Although he left F1 at the end of 2018, Alonso hasn’t ruled out a comeback at some point in the future. Naturally, that’s led to all sorts of wishful speculation about which team he would make a comeback with – Red Bull? Mercedes? Ferrari?

It’ll never happen, of course. As much as we’d love to see him in F1 again, the best we can hope for is probably as a McLaren substitute if Lando Norris or Carlos Sainz get injured or something, but full time? Unless it’s with a top team, there’s no chance. And the top teams won’t have him.

He’s still keeping an eye on F1 though and thoroughly enjoyed the Hungarian GP – and after a race like that, how could you not?

In the press conference afterwards, the top three – who, arguably, are also currently the three best drivers in the sport – were asked whether they’d like to see Fernando back on the grid again. Hamilton and Verstappen started off seeming quite keen:

LH: I was just actually watching some of the restarts, the starts of previous years and watching him from his Renault days and I remember just before I even got to Formula One watching how amazing their starts were. I don’t know how old Fernando is now but he’s always going to be a great driver. If he can get a good seat, he’s always welcome here to battle with us. It doesn’t make a difference, really, necessarily for me. I’m here to fight whoever’s here.
MV: Yeah, I think it was a bit of a shame that I never had an opportunity to fight against him in F1 so yeah.

Hamilton then suggested Alonso could partner up with Verstappen, which led to a weird discussion about Alonso being old enough to be his dad (and age in general):

Back on the topic of Alonso, Vettel seemed less enthusiastic about him returning than the other two, while Verstappen praised his attitude towards racing – unsurprising, since Max seems to be cut from the same cloth with his iRacing exploits and desire to race at Le Mans.

SV: I don’t mind [if he comes back]. I don’t know why… I don’t think he never really liked me. I don’t think we really had a… I don’t mind him. I respect him for what he achieved and for what he can do on track. I don’t know. I guess he’s bored if he has time to write these things. So bring him back, I don’t mind.
MV: Maybe as a social media manager. To me, he’s always been very nice and good. I like that he is also now looking into other opportunities for racing. He just loves racing and he wants to win, he wants to be competitive. It’s good to see.

Hamilton then threw a conversational grenade into the discussion, leading to an amusing debate over exactly whose seat he meant..

LH: The sport needs the best drivers in the best seats and there is still at least a seat available that’s good enough for winning and he’s good enough for winning so it wouldn’t be such a bad…
MV: Maybe he could speak to Toto.
LH: Valtteri’s great; Valtteri’s been winning. You’re the one with the extra seat, I would say.
MV: I didn’t say that.
SV: I’m not sure Japan would be happy though!

We know there’s more chance of Pastor Maldonado being retroactively declared the true 2012 F1 champion than Alonso driving for Mercedes or Red Bull, but come on guys, do it for the memes – we’ve got a long summer break ahead of us, at least leak out some information that Alonso is in contention to take Valtteri Bottas’s seat for next year, or that Red Bull wants to bring him in for Pierre Gasly for the rest of the year to help secure second in the constructors’ championship. Even if it’s not remotely true, just imagine the hype!

On another level, how cool is it to see drivers joking around like this after a race as intense as Hungary? OK, Vettel wasn’t in the fight, but Hamilton and Verstappen spent the whole race fighting each other and then straight afterwards having a laugh. The respect between these guys is enormous so let’s enjoy it – because in the future if they’re in the midst of a close title fight, there might well be a bit more needle… 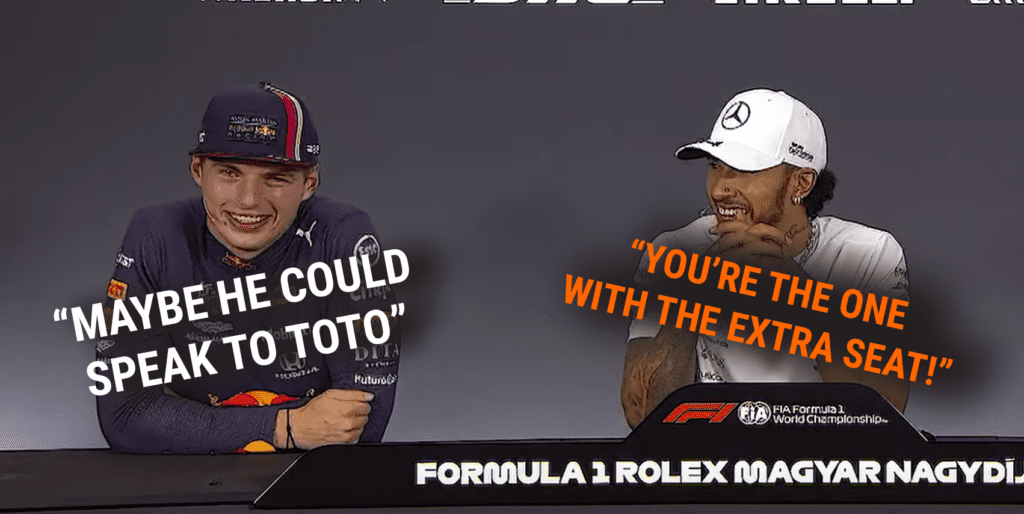