Toyota has finished second at Le Mans on four occasions and come achingly close to victory at least three times, most famously in 2016 when Kazuki Nakajima broke down on the final lap.

So for 2017 Toyota went all-out to win the race, sending three of its TS050 Hybrids to Le Mans in the hope of beating Porsche to capture its first Le Mans victory. With no more Audi to contend with 2017 was surely Toyota’s best chance to win the race.

It all started off so well. Kamui Kobayashi shattered the track record in qualifying and in the race the No.7 car was easily leading from the No.1 Porsche, with the No.8 Toyota not far behind. The other Porsche was out of contention too having hit mechanical troubles early in the race. If Toyota couldn’t win from this position, when would they ever win?

But then the Toyota curse started to hit.

It began when Sebastien Buemi reported problems with the No.8 car. He said over the team radio that he could feel something wrong and the car itself was dropping fluids. However the team could see nothing wrong in the data so he stayed out. Then a few laps later the team finally spotted the issue and pulled a furious Buemi into the pits for repairs. A couple of hours later and the No.8 car was back out on track, albeit more than 30 laps behind.

The No.9 Toyota had been running a little way back all race after picking up debris on the first lap which dropped it off strategy. It then had a delay when it was called into the pits to fix a problem with the light panel on the number box.

But then came the big shock. Following a lengthy safety car period to clear gravel from the circuit, the leading No.7 Toyota slowed to a crawl. Kobayashi attempted to get the car back to the pits on electric power alone, but it was a lost cause. Kobayashi stopped out on the circuit and jumped from the car. It was all over.

That left the No.9 Toyota as the only real challenger to the leading Porsche. Even though it was a lap down, with 14 hours to go it was still in with a shout – after all, this is Le Mans. But then, unbelievably, it suffered a puncture and with Nicolas Lapierre in a hurry to get back to the pits the rim exploded, causing further damage and further problems and eventually causing the No.9 to retire as well.

In the space of half an hour Toyota went from a position of impressive strength to having almost no chance of winning whatsoever. 11 hours into the race the No.1 Porsche leads, with LMP2 cars second and third overall.

But so far it’s yet another Le Mans in which the heartbreak of the Toyota team is the overriding narrative. Everything was in their favour this year and still it seems they can’t win. Will they ever? 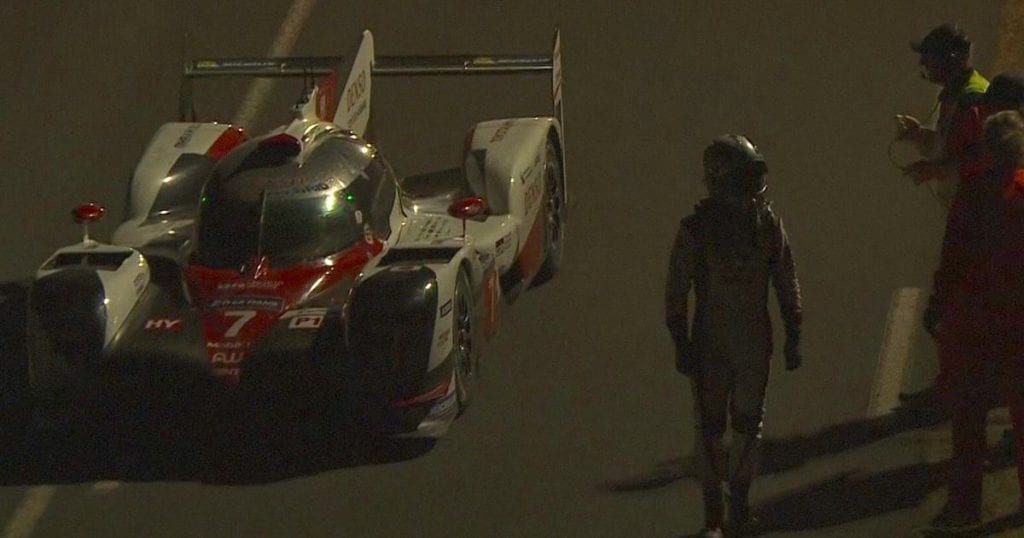