Being an FIA championship, F1 has a hefty rule book to follow. There are the obvious things in place to make sure teams don’t cheat as well as safety precautions, but there’s more than meets the eye. From the colour of the carpet on the podium to how many cars are too many cars on the grid, there’s a rule for almost everything.

RULES ABOUT THE DRIVERS

Throughout the season, a team is allowed to use four different drivers if they need to. There are also not allowed to be more than two cars by each competitor, so there’s no chance of Red Bull or Mercedes sneaking in a third car to help them get those all-important championship points. 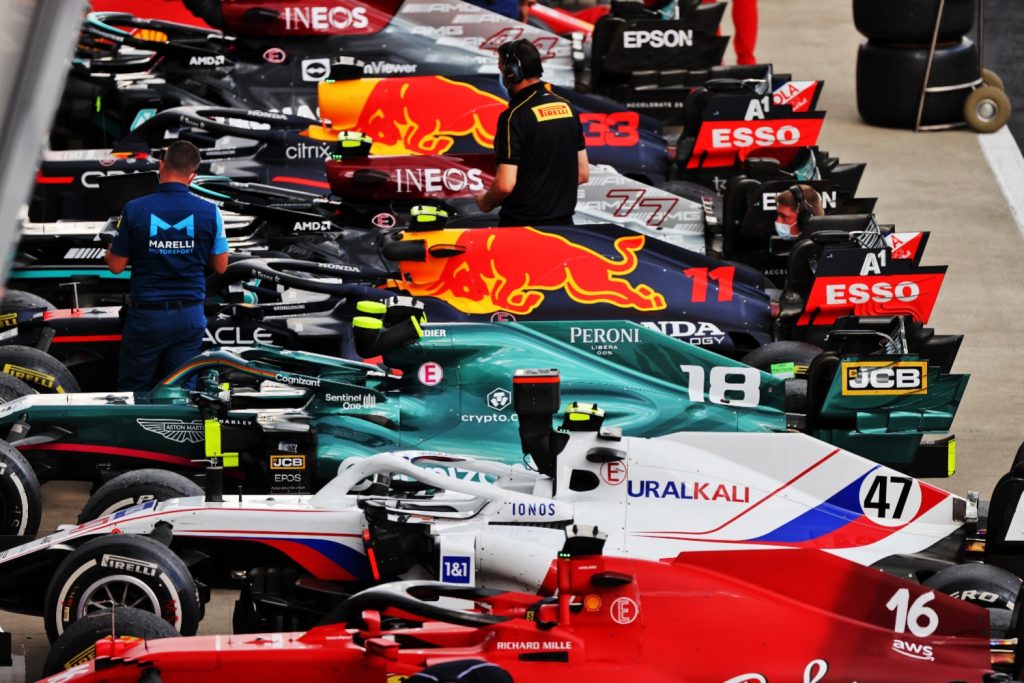 If there aren’t enough cars for an event, the FIA might also cancel it. The Sporting Regulations state that if there are fewer than 12 cars available, then the event could be cancelled. We’re guessing that this one was influenced by the nightmare 2005 US Grand Prix when only six cars lined up on the starting grid. Yup, we’re serious. 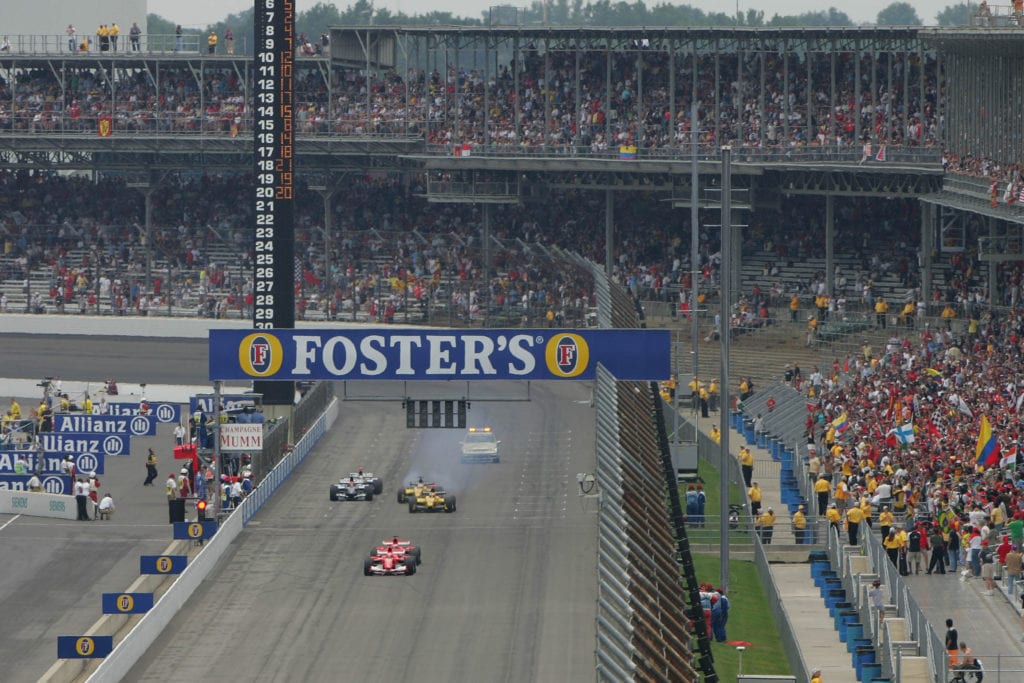 You’ve also got to make sure you’re around for the annual FIA Prize Giving ceremony if you finish the drivers’ championship in the top three!

RULES ABOUT THE LIVERIES

So, liveries. There are strict rules about these, including that both cars have “substantially the same livery at every event”. Basically, you can’t be doing what BAR did in 1999 when they revealed two completely different liveries for the same car during their pre-season launch. They’ve got to be pretty much identical. 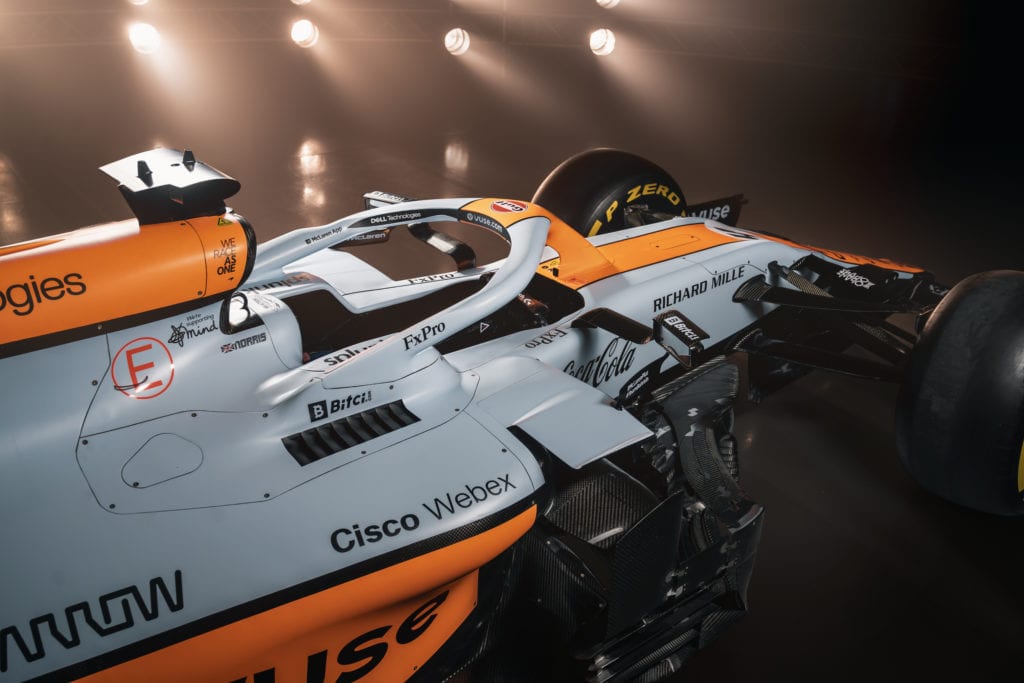 If you want to make any “significant” changes to your livery throughout the season, you’ve also got to go by the FIA and the Commercial Rights Holder and get their agreement. Similar to how McLaren got their Gulf special approved for Monaco this year.

RULES ABOUT THE SCHEDULE

F1 is all about timing, and that’s the case both on and off the track. Behind the scenes, F1 is run to a tight schedule, and almost everything you see is timed to perfection.

On a typical race weekend, not for Sprint Race weekends, two free practice sessions happen on Friday. They’re both one hour long and have to be separated by at least two and a half hours. Then on Saturday, you’ll have FP3, which is also an hour and has to be at least 19 hours after FP2. 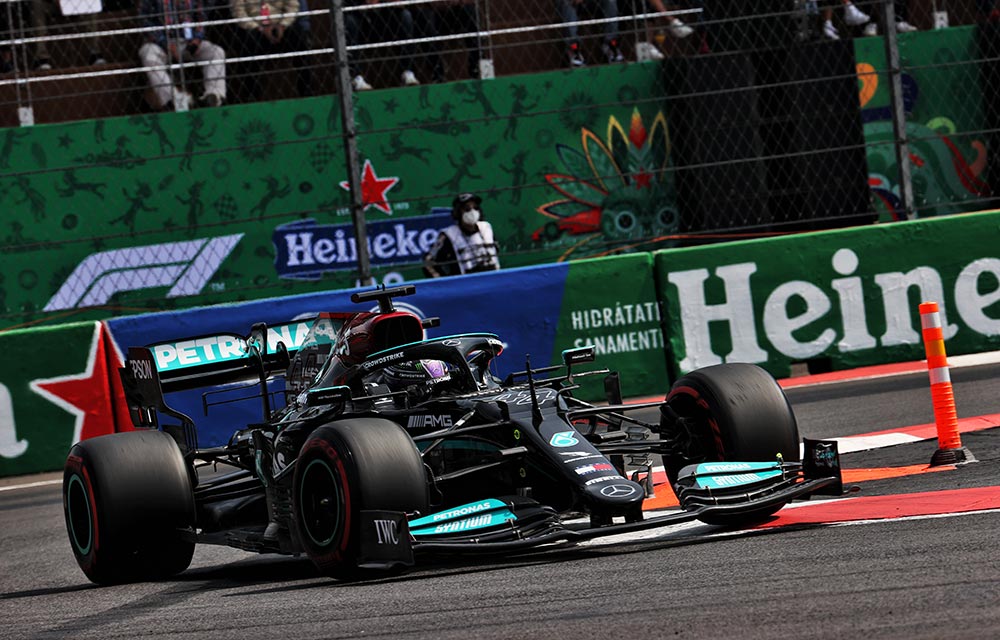 These rules had to be applied when rescheduling the Emilia Romagna Grand Prix weekend earlier this year due to Prince Philip’s funeral.

Things like the Thursday Press Conference are also timed to be at least twenty-three hours before the start of FP1 on Friday. 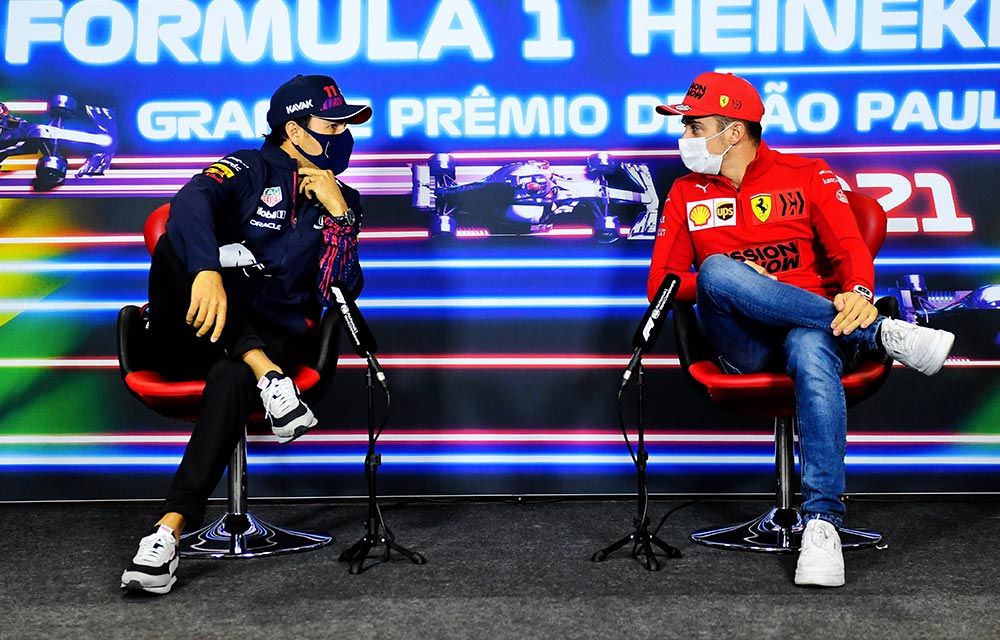 Away from the track, F1’s calendar also has its limits. The minimum number of events for the championship is eight, with the maximum currently set at 23.

RULES ABOUT THE PODIUM

Podiums are serious business, so much so, we could do a whole different article on the odd rules and regulations behind them. The FIA appoint someone known as the “master of ceremonies” who will need to ensure all the following is in place for each race.

Before a driver even gets to the podium, they need to go via parc ferme. Ideally, parc ferme is immediately below the podium, with direct access to the top three finishers and the representative for the winning constructor. There is also normally a cool down for drivers to chill out in moments before the podium celebration. These rooms need to be suitably ventilated or have air conditioning if the temperature is above 25°C. 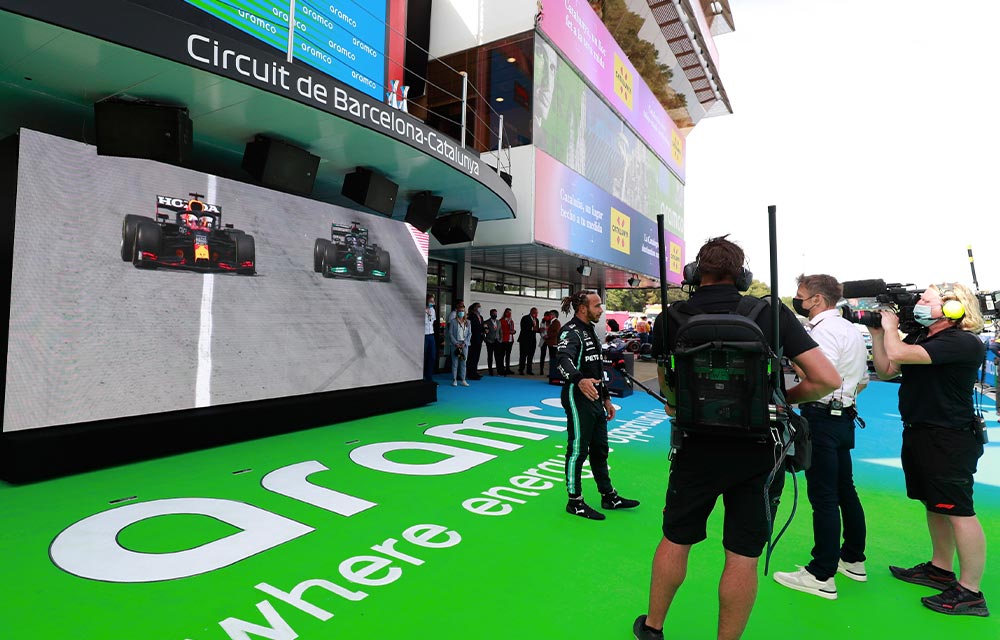 Throughout the process, water with no branding needs to be provided. Three bottles must be at parc ferme, with three additional bottles in the ‘cool down room’ – no other drinks are allowed in these areas. Three towels are also given out during this time.

A bottle of champagne (or an alternative) must be placed ready for the drivers on the podium steps. The trophies themselves are also laid out on a table on one side of the podium, with marks on the floor to show where the people presenting the silverware should stand. 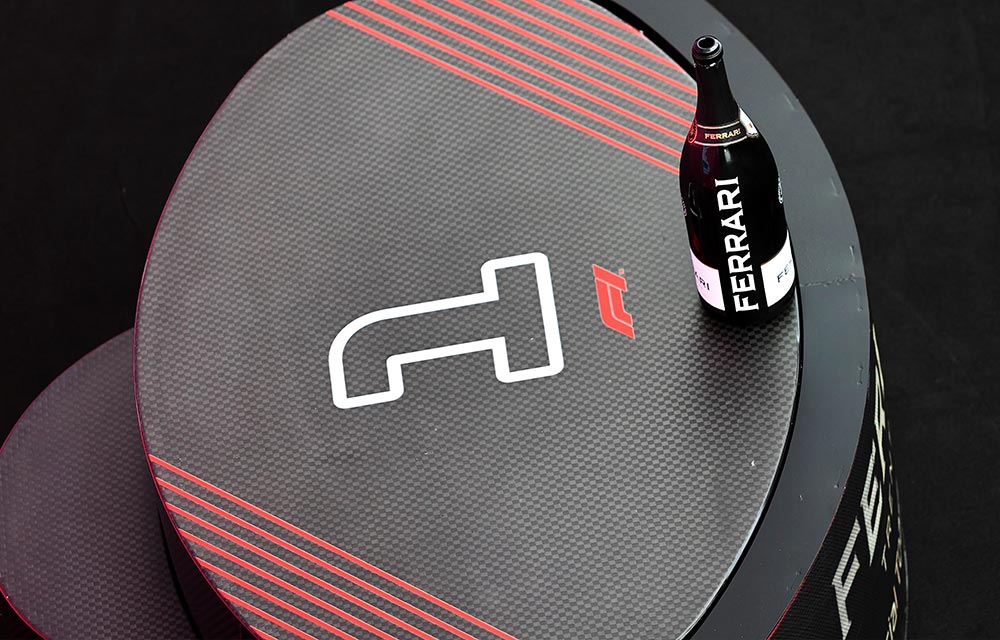 The trophies need to include the F1 logo, the ‘official name of the event’, where the driver finished, and follow set height requirements and can’t weigh more than 5kg.

They also “must be in the form of traditional cups”, but we’ve seen this rule bent a fair bit over the last few years. 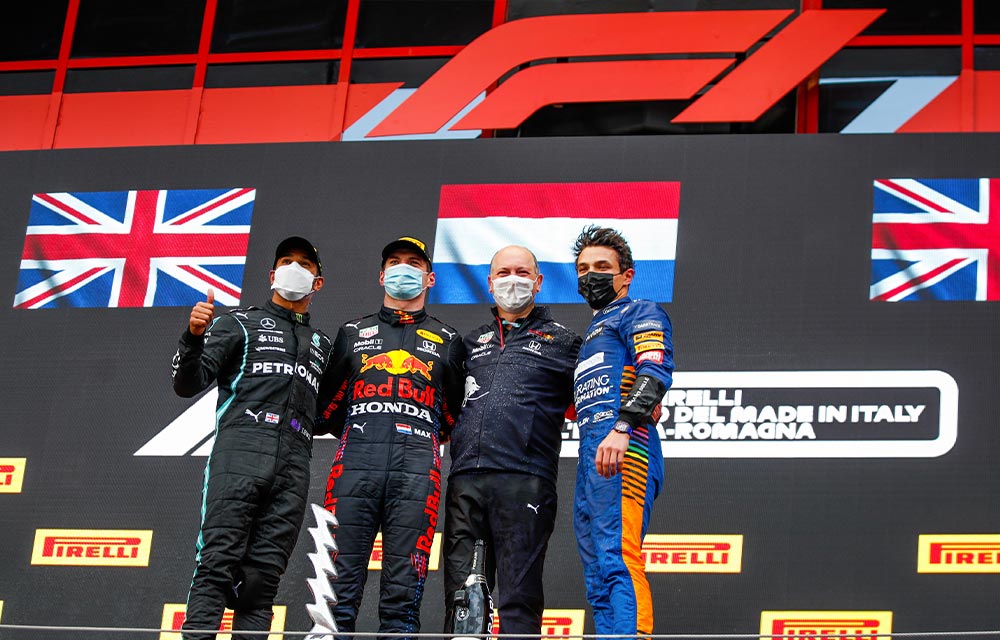 Although most circuits now have digital flags on the podium, there is a rule that “Olympic Games-style “flat flags” should be used” if needed. As for the carpet, that should be green or dark blue.

National anthems need to be played via a “suitable sound system”, so basically not a portable Bluetooth speaker. Once all the presenters and representatives have left the podium, the champagne spraying can begin, and that iconic music can be played.

Which rule did you find the most surprising? Let us know in the comments! 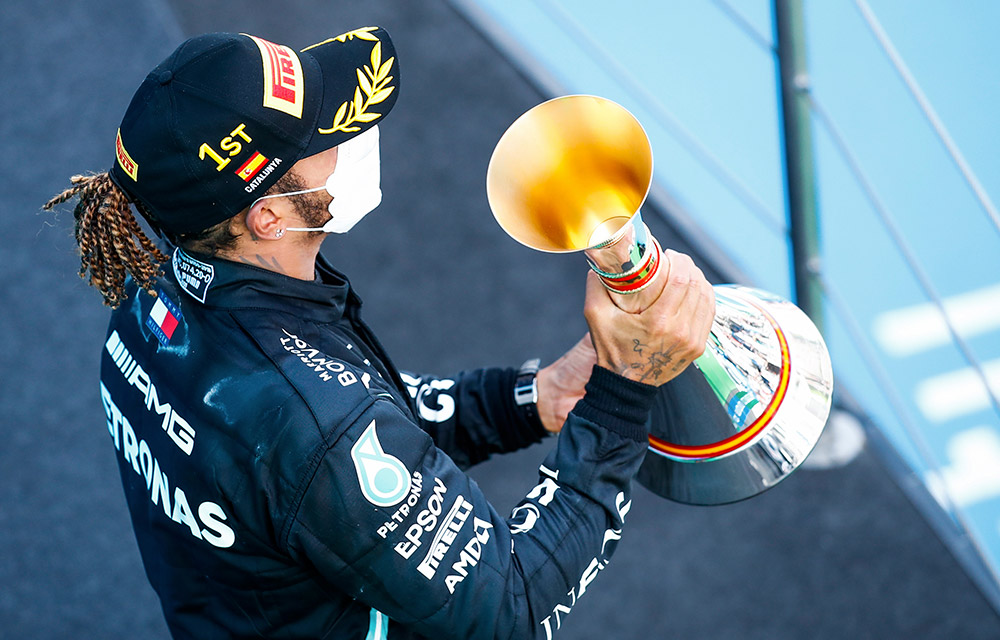