He’s often referred to as the greatest of all time, earning himself an incredible seven world titles during his stint in F1, but today we look at some of Schumacher’s best moments off-track on his 52nd birthday.

It’s well-documented that Schumacher was incredibly generous with his charitable donations over the years. Speaking to F1 magazine, Schumi once said: “it’s great if you can use your fame, and the power your fame gives you, to draw attention to things that really matter.”

As well as working with the FIA on road safety campaigns and taking part in charity football matches, Schumacher also made several personal donations to organisations totalling tens of millions.

He was appointed as the UNESCO Champion for Sport back in 2002 in recognition for his contribution to the charity’s education fund for younger people. In this role, Schumacher supported projects worldwide in locations such as Senegal, Bosnia Herzegovina, Peru and Sri Lanka.

These projects included a ‘Palace for the Poor’ in Peru in which he funded the construction. The building catered for homeless street children while also giving them food, education and medical treatment access. In the same year, he also helped fund a school in a poor slum in Dakar.

Schumacher also donated $10 million to the 2004 Boxing Day Tsunami victims in Asia. In a statement on his website, Michael revealed that one of his bodyguards, and his two sons, died due to the natural disaster. Schumacher’s donation amount was more extensive than many organisations, sports entities and even individual countries.

His Cameo In Cars

We love the movie Cars; we aren’t even afraid to admit it.

However, many racing fans were left shocked to discover that Michael Schumacher’s voice even makes a cameo in the Disney Pixar film.

Now, if you haven’t seen the film, firstly, where have you been? Secondly, the plot of this film is probably going to sound a little strange.

In the final scene, Schumacher voices himself as a talking Ferrari car as he visits a small independent tyre shop in the middle of a rundown desert town that Lightning McQueen has helped restore.

The two owners of the store, Guido and Luigi, are both Italian and huge Ferrari racing fans, so can’t quite believe their luck when Schumacher visits the tyre shop.

If you haven’t seen the movie, add it to your watchlist over the F1 winter break.

Schumi As The Stig

Back in 2009, UK fans tuned into another episode of the hit BBC show Top Gear. It seemed to be a reasonably typical show with The Stig racing a Ferrari FXX around the test track for a lap time. That was until ‘The Stig’ made an appearance and had apparently told host Jeremy Clarkson he tired of being anonymous and was willing to reveal his true identity.

‘The Stig’ was known as a nameless and faceless character on the Top Gear show, with it being an ongoing joke that nobody knew its true identity.

Upon removing the racing helmet, we couldn’t believe our eyes that it was the legend, Michael Schumacher.

In one of the most iconic moments of the show’s history, Schumacher removed the race helmet before giving Clarkson a cheeky wink.

Although this was just a bit of fun and Schumacher wasn’t actually The Stig, it’s really one of the funniest moments from the show and let us see Schumacher’s sense of humour as he was willing to play along with the joke.

It’s been well-documented how much of a fan Sebastian Vettel is of Michael Schumacher. Vettel had spoken to publications before about how his bedroom walls were plastered with Schumi posters growing up, and that he was his hero. Baby-faced Vettel even got to meet Michael when he was seven-years-old as Schumacher handed him an award at a karting track.

It was a dream come true for Vettel, getting to race alongside his childhood hero and has been vocal about what a mentor Schumacher was to him growing up in motorsport. Something Vettel has promised to do for Mick Schumacher, Michael’s son, when he joins F1 this season.

Away from F1, Schumacher and Vettel were still able to compete alongside each other in the Race Of Champions. The duo first represented Germany from the 2007 event and paired up until 2012.

Vettel then participated in the 2019 Race of Champions with Mick Schumacher to continue the Schumacher-Vettel legacy.

When Schumacher returned to racing in 2010, he joined the new Mercedes team alongside fellow compatriot Nico Rosberg. Rosberg, who would win the 2016 drivers’ title with Mercedes, revealed on his “Beyond Victory” podcast the mind games Schumacher played on him during their time as teammates.

One example Rosberg gave was during the Monaco Grand Prix qualifying when Schumacher deliberately locked himself in Mercedes’ only toilet so that Nico couldn’t use it before the session. The panic Rosberg had, not being able to use the restroom, meant his calm state of mind has been severely disrupted and gave Michael the edge on-track as a result.

As well as the mind games he would play on his teammates, Schumacher also made sure to pull the odd prank on his fellow drivers. Unfortunately for Rosberg, one quite public stunt put him as the target again during a press conference.

With Schumacher and Vettel insisting he held the microphone closer to his mouth, Rosberg ended up deafening half the media and providing an utterly inaudible answer to a question. He quickly realised his mistake when Schumacher, Vettel and all the media fell about laughing.

Rosberg can look back with a smile though, even leaving a comment on F1’s video of the prank with a bunch of smiling emojis.

After taking a win in front of the Tifosi at the 2000 Italian Grand Prix, Schumacher began to sob during a post-race press conference when told he had equalled a record set by Ayrton Senna.

Overcome with emotion and exhausted after a gruelling race, a journalist informed him that he had 41 wins to his name, making him equal-second with Senna in the record books.

“Do those records mean a lot to you?” the journalist asked.

“Yes, they do mean a lot to me,” Schumacher replied before breaking down and crying in a rare display of emotion.

Fortunately, his brother Ralf was also present having finished third, with Schumi also being comforted by Mika Hakkinen. 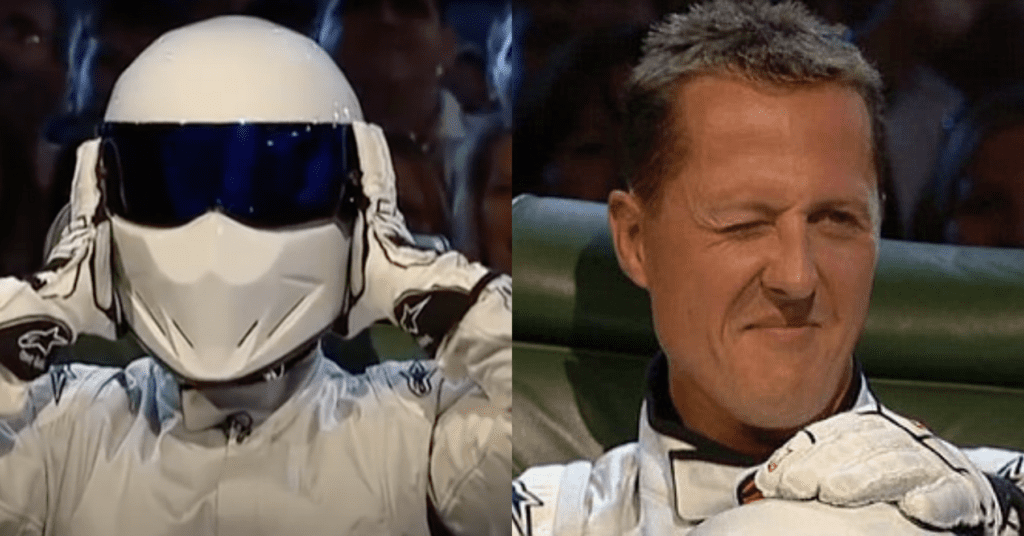