The World RX Championship Has Been Blown Wide Open After A Crazy Canadian Round – WTF1
Skip to content
×
News , Rallycross

Until now, the championship looked like being an intra-team battle between the Hansen brothers. Other drivers were quick, sure, but a lack of consistency from one single rival (plus strong drives from a number of one-off entrants) meant that nobody looked likely to mount a challenge on Kevin and Timmy.

Not anymore. Timmy Hansen, the only driver to win more than one event this year, didn’t even make the semi-finals. A mistake in Q2 and then a collision in Q4 meant he failed to make the top 12 for the second time this year.

Kevin Hansen made it through but didn’t appear to have great pace, potentially opening the way for Niclas Gronholm and Andreas Bakkerud to get themselves in the title hunt. This was particularly impressive for Gronholm, who’s missed two events this year through illness, and having ended up as top qualifier and looking like the event favourite, a win would thrust him into unlikely contention with three rounds remaining.

However, he made a bad start in his semi-final and then delayed his joker lap too long, ending the race fourth and failing to progress to the final as Kevin Hansen scraped through.

This was looking peachy for Hansen – having led the championship since the first round, he was looking on course to take good points from a poor weekend – an essential skill in any close title fight. However, in the final he collided with Anton Marklund, putting the GCK driver out and leaving Kevin with a damaged car. He limped home to fifth but was later disqualified for the contact, costing him two points in the championship.

Take a look back at the incident that put Anton Marklund out of the Final and earned Kevin Hansen a disqualification for causing a collision. What is your take on it?

Through all the craziness (which included Timur Timerzyanov winning his semi-final with broken suspension), Andreas Bakkerud won his first event since 2016, Janis Baumanis finished a career-best second, with Timerzyanov completing the podium in third.

Bakkerud has had a mixed season – he’s finished 10th or lower in three of the seven rounds so far, yet all the others have been top three results. That closes him to within five points of Kevin Hansen, with Timmy Hansen now 14 points adrift in third. Gronholm is now 28 points behind, his failure to make the final effectively erasing any slim title hopes he may still have had.

Just three rounds are left this season – France on 31 August, Latvia on 14 September, and South Africa on 9 November. Kevin Hansen’s consistency has kept him as the title favourite until now, but you sense he’ll probably need another win somewhere if he’s going to win the title. Timmy needs wins even more, and it’ll be interesting to see how Team Hansen deals with having to not only fight each other, but now Bakkerud as well. 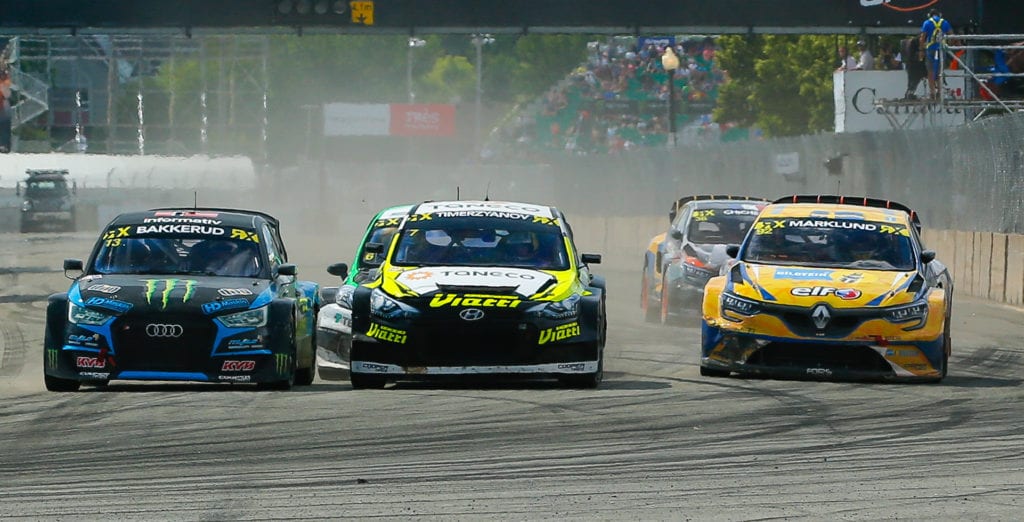