There Are No Prizes For Guessing Who Won The World RX Event In Latvia – WTF1
Skip to content
×
News , Rallycross

There is only one word to describe Johan Kristoffersson: dominant. Completely, utterly dominant. This is a man who seemed tough to beat last year. Now he looks untouchable. In Latvia, he did what he has been doing for (almost) the entire 2018 World Rallycross season – he won. Again.

On Saturday, he was top qualifier, taking wins and the overall quickest time in Q1 and Q2. Mattias Ekstrom and Sebastian Loeb also took wins in their respective qualifying races, but ultimately fell just short of the man who looks to have his second World RX championship well within reach.

It came as no surprise that these three men all featured in the final. Kristoffersson took pole, with the only other man to win a race in the championship this season, Loeb, beside him. Ekstrom started just behind them, lining up alongside Timmy Hansen, and in front of Niclas Gronholm and Kevin Hansen. The latter had driven superbly on Sunday to make it to the final, after a less than ideal Saturday.

Everyone got away from the line well, and while Kristoffersson capitalised on his pole position, it was Ekstrom who made the best start, winning the Supercharger award and getting past Loeb into the first corner. The Frenchman dropped another place to Gronholm and was forced to joker on lap one, along with Hansen.

Meanwhile, Kristoffersson looked to have the race under control by just half way around the first lap, holding a comfortable lead over the charging Ekstrom. Loeb moved up a position after getting past Timmy Hansen as he returned to the track from his joker, but the lead looked well and truly set by this point.

The battle for the final spot on the podium began to heat up as the race went on, with Gronholm looking for his first top-three finish in his WRX career. His main challenger? Just a nine-time World Rally Champion.

Ekstrom and Gronholm both decided to joker on lap three. Loeb, having already jokered, was in the perfect position to pounce to take third place – which, ultimately, he did. Gronholm looked to be able to challenge him as he came out of the joker, but the Peugeot driver got around just ahead. Gronholm pressured him for the remainder of the race but couldn’t find a way past.

Out front, Kristoffersson took his joker with two laps to go, and held a steady two-second gap to his nearest challenger as the race drew to a close. Ekstrom took second, equalling his best finish of the year so far, with Loeb in third. Gronholm got the better of the Hansen brothers, with Timmy finishing fifth, and Kevin sixth.

With eight wins now under his belt this season, Kristoffersson has surpassed his record from last year. With three rounds remaining, he feasibly could go on to win eleven out of twelve rounds, and it looks like he has secured his grasp on his second title. 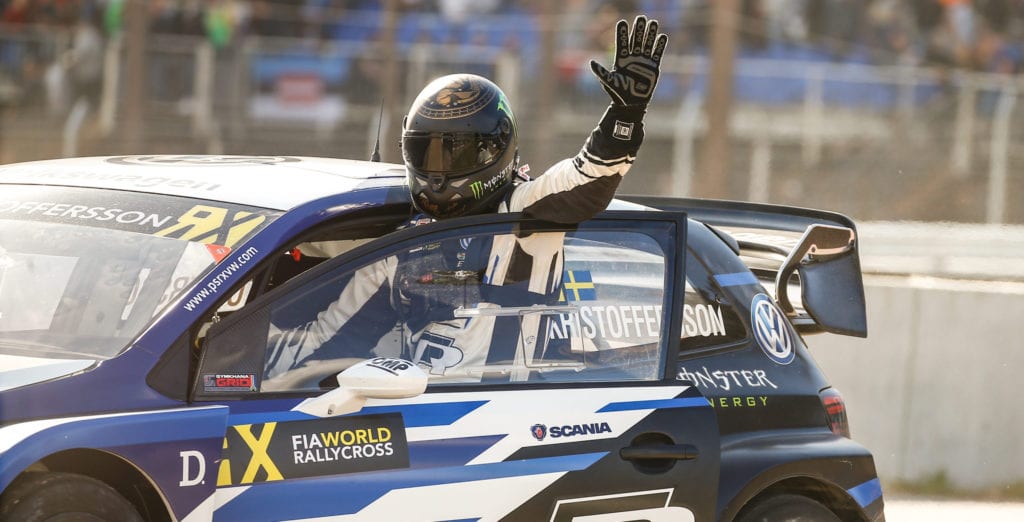