Following the success of last year’s F1 Live event on the streets of London, F1’s commercial boss Sean Bratches has confirmed that for 2018, more similar events to the one in London will take place across the globe this year. Speaking to Auto Motor Und Sport, he said:

“We’re planning something similar in Marseille, Berlin, Milan, Shanghai, and Miami, but not with so many cars. We believe that this contact with the audience outside the race track is important. It carries our message to people we would not otherwise reach.

“Formula 1 has been so exclusive over the years that it was only accessible to interested people. The same applies to sponsors. There is a lot of interest from companies that are not yet in F1.”

It’s an attempt to open the sport up to the general public and for many in the city-centres of the above, it’ll be their first opportunity to see an F1 car in action. Whilst these 2018 events will be smaller, they will hopefully carry the carnival feel that the London event created and attempt to engage potential fans in an entertaining way.

It hasn’t yet transpired as to what ideas are on the table for the upcoming shows. Some ideas we’d like to envisage fans doing are perhaps strolling through a Kimi Raikkonen-themed karaoke bar. Hungry? A visit to a Sauber cake stall should set you right, followed by shoey drinking games at Daniel Ricciardo’s bar. When you’re tired out, recharge your batteries at the Fernando Alonso’s deck-chair rest area.

Above the endless options for gimmicks, the most impressive aspect will be the machinery on show. Last year in London, the F1 cars past and present that were flying through the streets were amplified by the concrete jungle of the city and their inclusion in future events will be second to none.

The sport continues to set an agenda for increasing exposure and transferring the 54 per cent increase in social media presence into a real extension of the fan base – and it’s probably going to work. 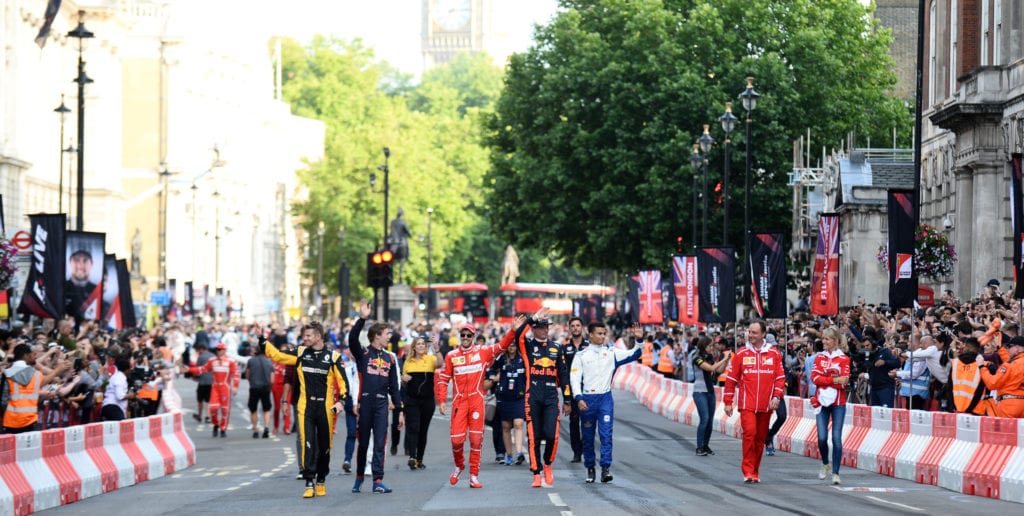