When it comes to following the entire Le Mans 24 Hours, we’ve all got our own ways of trying to stay awake, most of which involve a massive amount of coffee and energy drinks.

Jayson Fong has another method, however: producing art. For each hour during the race, he picks out a highlight and reproduces it – and the results are magnificent.

It seems like a mammoth undertaking to put out 24 paintings in 24 hours, so we spoke to Jayson about how he decides what to paint, where the idea came from, and how he manages to do them so quickly.

When did you first come up with the idea?
“My first year for the hourly paintings was 2015. I visited Le Mans for the first time in 2014 when Porsche first brought the 919 as an accredited photographer and spent lots of time trackside and in pitlane (without a doubt one of the most intense workplaces ever!) After the visit I promised myself I would never miss another Le Mans and would be there every year…

“However in 2015 I had to break the promise so decided I would stay awake for the 24 hours watching from home, but thought I might need something to keep me occupied in that time. The drawings was a last minute decision and I spent a bit of time just before the race running around the house trying to find material to draw on. I ended up with a really broad collection of works that year that included acrylic paintings on canvas, drawings, marker renderings, watercolour, etc. It was a bit frantic to be honest, but fun to have so many different pieces everywhere.

What was your inspiration?
“The work of the photographers out there always inspires me – the job is a difficult one! There might be lots of time at Le Mans, but there is so much happening they have to pick their moments or make their own luck by being in the right place at the right time to tell the story of the race.

“Fortunately being behind a livestream at home and with incredible commentary from Eurosport and the Radio Le Mans team, the hourly artworks gives me an opportunity to capture crucial points from all over the circuit.”

If there’s a boring period in the race with very little happening, how do you decide what to paint?
“Doesn’t really happen too much, but this year there was lots of talk about the lack of competition. Luckily overnight, there were a few big moments and incredible liveries to focus on! Regardless of any boring periods, there is always a memorable moment to document somewhere!”

How long does each one take?
“I always aim for one hour. However, each year so far has been a bit different as I continue to figure out which style I’m most happy with. In 2015 I was spontaneous with mediums but managed the hour timeframes, 2016 I did watercolours (which I found very difficult), 2017 I did marker drawings (I ended up with quite a bit of time here without needing to worry about too much colour so happily managed the timeframes) and this year I decided to give watercolours another go because I felt the monochrome marker drawings were missing something.

“However, this year was really difficult as I was trying to mix both the drawing style from 2017 with the watercolour. As a result, Some took just over an hour and I was struggling on the timeframes while trying to watch the race (this is where commentary is really important), finish artworks and do the social media thing all at the same time!”

Have you ever been unhappy with a painting, scrapped it, and done something else instead?
“Yes! Very rarely is it a subject that I don’t like, it is usually because something more dramatic has happened to take its place in that hour! It’s usually done on the same bit of paper though so I don’t end up with any waste!”

Which one is your favourite from this year?
“Favourite for this year would probably have to be ‘Rubbing is Racing’. That was a highlight of the race and trying to get an image out that depicted the Ford vs Porsche battle as fast as possible was a nice challenge. It was also great to get a mention on the live commentary for the artwork from the Eurosport team!”

You can check out all of Jayson’s artwork from this year’s race (and more!) on his Twitter and Instagram pages. He’s also selling the original artworks from this year’s Le Mans through his website, with a portion of the profits going to charity.

We can’t wait for next year’s race – not just because Le Mans is completely awesome, but because Jayson’s work is quickly becoming a highlight of following the event. 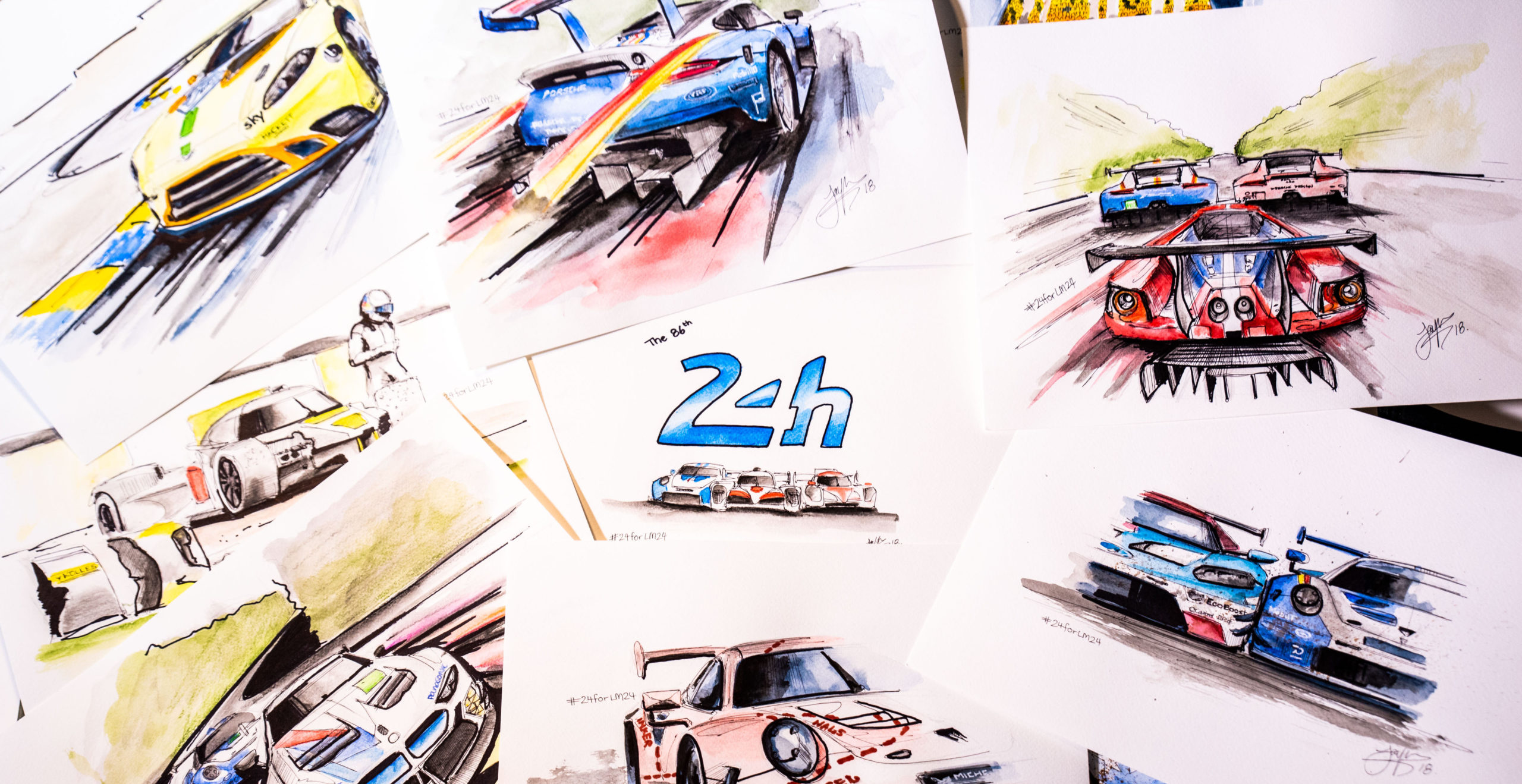