These Are The F1 Bernie Sanders Inauguration Memes You Need

We love the internet, like a whole lot. So when Bernie Sanders, a United States senator, became a viral meme for his deckchair and mittens combo at the inauguration, the F1 community delivered some absolute gold. Here’s a selection of our favourite Bernie memes.

Big love to the AlphaTauri and Alfa Romeo admins who shared these sensational photoshops from their respective 2020 seasons. As our very own Matt Gallagher said, “I see pre-season testing for the 2021 social media teams’ championship has begun.”

Race Of Champions, who have just announced their first event held on ice, also shared their best effort.

i am once again asking for you to enjoy this throwback pic.twitter.com/UzvYvKuj4U

How could we resist? pic.twitter.com/OHxuTs8ILc

Note to self: Buy a thicker coat for #ROCSweden. pic.twitter.com/CdH05ewWwS

I AM ONCE AGAIN ASKING

As part of another meme, Bernie Sanders became famous for a social media clip of him requesting donations for his campaign in 2020. This now-famous phrase “I am once again asking” has been used as a source of inspiration for some of these new F1 memes. But seriously, Aston Martin, when will we get some pictures of Sebastian in his new overalls? IT’S WHAT WE DESERVE.

I am once again asking for photos of Seb in green. @AstonMartinF1 pic.twitter.com/SCqZXA3moT

Twitter was also quick to add Bernie and his mittens into some famous freeze frames from various F1 moments.

Bernie is my 2019 rookie of the year pic.twitter.com/Qidqx8zbkv

Waiting for the season to start pic.twitter.com/kZzf5ygmqv

THINGS THEN GOT CHAOTIC

Let’s be honest, it was bound to happen. We still absolutely love it.

Just chilling with the homies pic.twitter.com/F8YD9eJ83N

“how hopeful are you for this weekend bernie?” pic.twitter.com/RCgfvYCful

All the F1 drivers + Bernie 😂 pic.twitter.com/cjbhHFl8QG

ADD IN SOME WHOLESOME

As well as the totally bonkers memes, there were also some super sweet ones. We think Bernie and Jack Aitken could be the next big bromance. Team Jernie or Team Back?

Got more? Be sure to tag @wtf1official in all your Bernie memes. 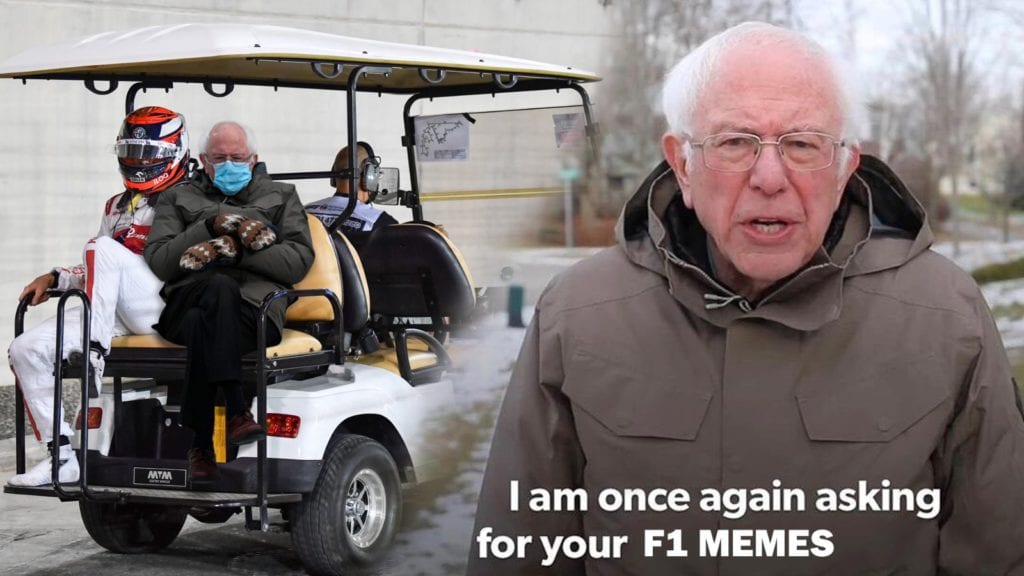