These Are All The Races Where Mercedes Didn’t Make It To The Podium – WTF1
Skip to content
×
Feature , Formula 1 , Statistics

We love a stat here at WTF1, and there’s been one from the past couple of races that’s really surprised us. The Monaco and Azerbaijan Grands Prix are the first two consecutive races since the end of 2013 to not have a Mercedes car on the podium!

Since the start of the turbo-hybrid era in 2014, Mercedes have been the team to beat. At least one of their drivers have achieved a podium finish at 131 out of 144 races since Australia in 2014. If that’s not impressive, then we don’t know what is!

And to top it off, they’ve won 105 of those races. That’s pretty mega. That leaves only 13 races Mercedes fumbled and lost the ball. 13 races to feature no Mercedes cars on the podium.

Some of those races were pretty good, not least because we had some cars in unusual positions, so we decided to look back at the races where Mercedes missed out on a top 3 finish.

Mercedes might have locked out the front-row, but it didn’t last long after the lights went out for Sunday’s race. Both Sebastian Vettel and Kimi Raikkonen of Ferrari launched past the Silver Arrows of Lewis Hamilton and Nico Rosberg for the lead.

Hamilton then locked up and dropped down to 10th, making his way up the grid until a mid-race safety car. Lewis was now racing Red Bull’s Daniel Ricciardo. The two had a moment on track and saw Hamilton understeer into the side of Ricciardo. Hamilton got a drive-through penalty for causing a collision and had to change his front wing too.

Nico Rosberg looked to be settling for a third-place until Raikkonen was forced to retire with an issue. With a few laps to go, Ricciardo sent a bold dive on Rosberg but it ended badly. Rosberg cut him off and clipped the Red Bull front wing, resulting in a puncture. Both had to pit, but Ricciardo managed to keep his podium. His teammate Kvyat was promoted to second, with Vettel taking his second victory for Ferrari.

Do I really need to tell you how Mercedes were beaten here?

It was a totally unbelievable sight and one that seemed to happen in slow motion in front of our eyes. That’s right. This is the race when Hamilton and Rosberg crash into each other on the first lap of the race.

3 years on, the Lewis Hamilton-Nico Rosberg total wipeout Mercedes crash at the #SpanishGP never gets any less dramatic, does it?

Rosberg has won seven races in a row and was 43 points ahead of Hamilton in the standings. There was lots of pressure on Lewis to win the race, but then the incident at Turn 3 happened. Nico was in the wrong engine setting as Hamilton got a phenomenal run and went to the inside, which Rosberg covered. Hamilton ended up on the grass, punted into Rosberg, and both Mercedes were wiped out of the race.

Max Verstappen would go on to win the race, his first with Red Bull after his very public promotion. He also became the youngest-ever F1 race winner, aged 18 years, 228 days.

Celebrating their 125th anniversary, Mercedes made a big deal of the 2019 German Grand Prix. From formally sponsoring the event to running a special one-off livery and dressing up all fancy, it was an uncharacteristically large event for the world champions.

Halfway through the race, all seemed to be running smoothly. Mercedes had a 1-2, but suddenly Lewis crashed at the front corner and needed a new front wing. The rain started to fall again, and Hamilton was forced to wait in the pits for a minute whilst they changed the front wing and changed the tyres from dry to intermediates.

Bottas then spun at the first corner later in the race and was out. Mercedes Boss Toto Wolff summarised the weekend as a “total, fucking, shit day at the office.”

Verstappen, Vettel and Kvyat all once again benefitted. Vettel had fought his way from 20th on the grid and overtook cars to second. Kvyat took a gamble to go on dries early on and jumped nearly the whole field to get right into the podium positions.

Another nightmare weekend for Mercedes helped generate one of the best feel-good stories in F1’s history: Pierre Gasly’s win in Monza.

Bottas fell back to sixth place in the first two laps of the race, and found himself pretty much stuck there failing to get past anything.

Elsewhere in the race, Kevin Magnussen’s Haas broke down at the pitlane entry just as the pitstop phases were approaching. The pit lane was eventually closed, but Hamilton and Mercedes didn’t notice and he came into the pits. Inevitably, Hamilton was penalised for breaking the rules and was served a stop-go penalty.

During the race, Charles Leclerc crashed heavily at Parabolica and brought out the red flags which led to a standing start. Hamilton had to take his stop-go penalty immediately after the start, which then took him out of play for the win and became a mid-field battle which saw Pierre Gasly and AlphaTauri take the win.

After a dramatic announcement that Lewis Hamilton would miss the Sakhir Grand Prix due to testing positive for COVID-19, George Russell was drafted in as his replacement. Everyone was hoping Russell could break his curse of never scoring a championship point and was rooting for him to win the race – maybe one of the only times the whole F1 community would be overjoyed with Mercedes dominance at a race weekend.

Qualifying looked strong and Russell also took the lead into Turn 1 during the race. However, things took a bad turn when a Safety Car was brought out for Jack Aitken’s spin at the final corner.

Mercedes had such a lead they chose to pit both cars as a precaution to definitely get to the end of the race with good performance. This is normal procedure for them. But it went horribly wrong. To put it bluntly, they fitted the wrong tyres to the wrong car, which isn’t allowed.

After fixing their mistake, Bottas was fourth and Russell was fifth. Russell was on a mission and he passed Bottas and the three cars ahead to take the lead again! That was until Russell got a slow puncture and was forced to pit again and give up the lead! Bottas finished in eighth, with George in ninth, but we hope it wasn’t the last time we see Russell in a Mercedes.

Like in Baku this year, Mercedes couldn’t get the tyres to work and the Ferrari and Red Bull cars were just faster.

Lewis qualified in 14th, and had some pace in the race but just couldn’t overtake on the notorious street circuit.

Mercedes only other double DNF in the turbo hybrid era. They had a front-row lockout, but Bottas suffered a hydraulics failure. Later on in the race, Hamilton was forced to retire for his own oil pressure issue.

Red Bull and Ferrari were just faster. Hamilton scored highly enough to win the championship for the fifth time.

Ferrari outplayed everyone on strategy, weirdly, pitting early and scoring a 1-2. Mercedes stayed out with Lewis in the hope Ferrari would get delayed in traffic but the tyre wear was too bad.

This was the race that Hamilton punted off Alex Albon when fighting for a podium. Lewis was penalised after the race, promoting Carlos Sainz to his first F1 podium.

The return of the old tyre issues. They couldn’t get heat in them and were slower than Red Bull and Ferrari. Lewis had a poor strategy and was jumped by Gasly and Vettel. Bottas’s wheel wouldn’t come off in the pits and he had to retire when running in second.

Bottas had almost no pace all weekend, and finished a disappointing 12th despite a fairly chaotic second-half of the race. Hamilton looked set to win after race leader Verstappen crashed with just five laps to go. At the restart, after the race was red flagged for Max’s incident, Hamilton accidentally changed his brake bias and missed the corner and went straight to the back of the field.

Which is your favourite of the races where Mercedes didn’t get a podium? 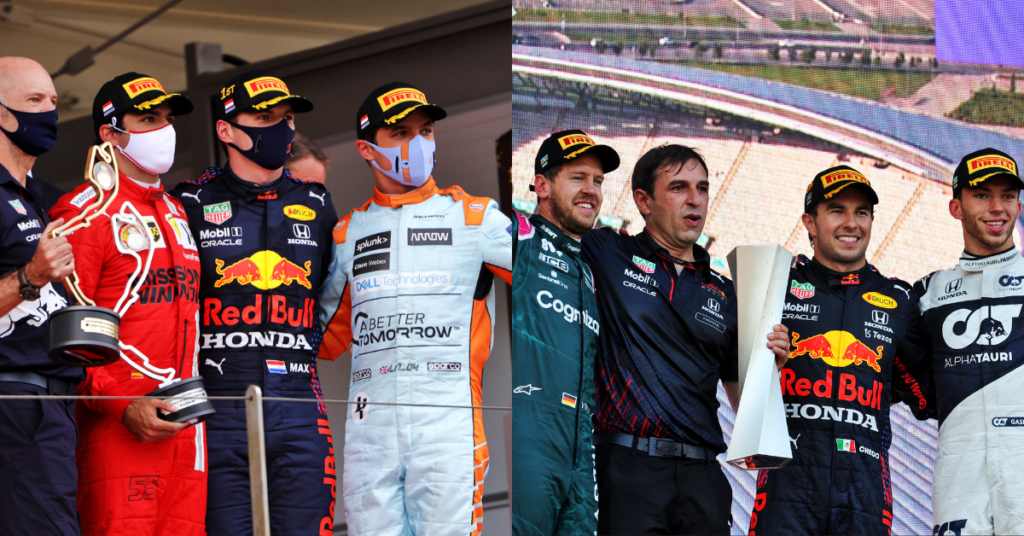