These Are The Biggest Driver Moves In F1 History

There was some huge news in the world of football this week: Argentinian superstar Lionel Messi moved from Barcelona to PSG. To be honest, we’re somewhat surprised that he didn’t fancy that Mercedes seat for 2022 but each to their own 🤷

Messi’s big move has got us thinking (dangerous, we know). There’s been a fair few groundbreaking moves in F1 over the last few decades, so here are some of the ones that had the biggest impact.

Lewis Hamilton driving for anyone other than McLaren used to be unthinkable. So when Mercedes signed him, everyone thought he’d made a huge mistake. Mercedes had podiums, and Nico Rosberg took his first win with the team in China in 2012, but Lewis’s jump to Merc was still a bold decision. Of course, it worked out pretty well in the end, didn’t it?

Coming into the 2014 season, Sebastian Vettel was a four-time F1 world champion and had won nine races in a row with Red Bull Racing. It seemed a match made in F1 heaven. That was until Vettel announced he’d be joining Ferrari for 2015 and beyond. It looked like a crazy decision!

2014 was Ferrari’s worst season in over 20 years, and it didn’t look like it would get better. Nevertheless, Vettel wanted to live out his childhood dream of driving for the Scuderia Ferrari team. Things turned out well when he won only his second race with the iconic manufacturer.

In the winter of 2005, Fernando Alonso announced he was moving to McLaren for 2007. The F1 world was stunned, not just by the move but because it was such an early decision.

He won the championship again in 2006 and then started a three-year deal with McLaren. However, when he arrived at the team, he was paired up with a promising young rookie by the name of Lewis Hamilton. Things didn’t work, and he went back to Renault for the 2008 season.

Alonso then made the comeback of all comebacks when he confirmed he’d be re-joining McLaren for the 2015 season. Nobody saw that one coming after the 2007 season!

Ah, one of the greatest examples of man and machine working in perfect harmony. Schumacher and Benetton looked unbeatable in the mid-90s. So, when Michael moved to Ferrari in 1996, it looked like he was only cashing in on an enormous paycheque.

Why would he leave the team he’d just dominated with? But that year, Ferrari won three races. Then in 1997, they challenged for the title. In the end, they won five championships together, so not too bad 👀

McLaren was easily the best team in 1989. So when Alain Prost announced he was leaving, later revealing he was going to Ferrari, everyone was surprised. It was common knowledge that Prost and his teammate Ayrton Senna had started to dislike each other – Senna wouldn’t even call Prost by name, yikes – but it was a big shock when Prost walked from the team.

Prost had a contract at Williams in 1993 and 1994, and part of it was that Senna wouldn’t be his teammate. But guess what, cheeky little Frank Williams signed Senna for 1994. It turns out the clause expired in 1994.

Prost was so taken aback that he left Williams early and retired from the sport. Senna partnered with Damon Hill, but unfortunately, he had his tragic fatal accident at the San Marino GP in his third race for the team.

Jenson Button had an incredible 2009 when he won the title with Brawn. It wasn’t even a question that he’d stay. Everyone just assumed he would.

McLaren, who eventually signed him, were surprised themselves when Button’s management phoned asking about a seat. Jenson just didn’t think Brawn/Mercedes had developed enough for 2010, and you know what? He was right.

Michael left F1 at the end of 2006 on a high. He’d fought for the title and was seemingly untouchable as the GOAT. But, when Button ditched Brawn just as Mercedes bought them, Schumi made a comeback.

After three years on the sidelines, Michael Schumacher’s comeback was on!

The ultimate mic-drop moment. After beating Lewis Hamilton to the championship crown, Rosberg announced he was leaving F1 for good just a week later. Everyone was in shock, especially as we were all so hyped for the Rosberg vs Hamilton battle we’d have in 2017. However, for Nico, he’d achieved his dream and now wanted to chill out with his family.

Can you think of any huge moves we’ve missed? Let us know in the comments! 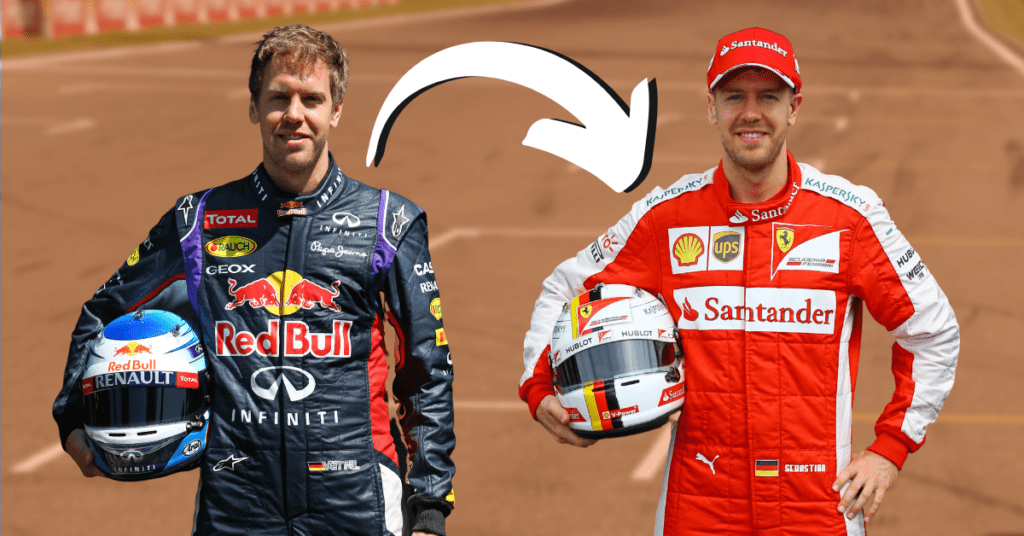