This Concept Livery Will Make You Wish Peugeot Was In F1 – WTF1
Skip to content
×
Design , Formula 1

This Concept Livery Will Make You Wish Peugeot Was In F1

Peugeot hasn’t been involved in F1 for over 15 years, but that doesn’t stop us loving this concept of what a modern-day livery for the French manufacturer would look like.

As an F1 engine supplier, Peugeot didn’t exactly enjoy a successful stint in the sport and it doesn’t look like it’ll return anytime soon.

It entered F1 back in 1994 to power McLaren, but after one year it was dropped and moved across to Jordan. From 1998 to 2000 it supplied engines to the struggling Prost team.

After scoring no points, it bowed out of F1 at the end of the season, although the engines were bought by Asiatech and used in the sport for the next few years.

So, it didn’t go particularly to plan, but nevertheless, there’s no harm in wondering what a potential Peugeot could look like.

Designer Sean Bull decided to find out and created this beautiful, classy and slick CAD concept livery for a Peugeot F1 car.

The current grid is packed full of colour, so a simple white and black livery would probably fit in pretty nicely among the likes of the pink Force India, bright blue Toro Rosso and orange McLaren.

Titled the Peugeot Sport 909-18 (following on from its 908 prototype), the concept livery adds a splash of colour with red accents.

The sponsor choices are interesting too: Red Bull and Virgin being the main two. It really does look incredibly cool on a 2017-spec car, with the new aggressive front wings, lower and wider rear wings and fat Pirelli tyres.

See more photos here. What do you think? Let us know in the comments. 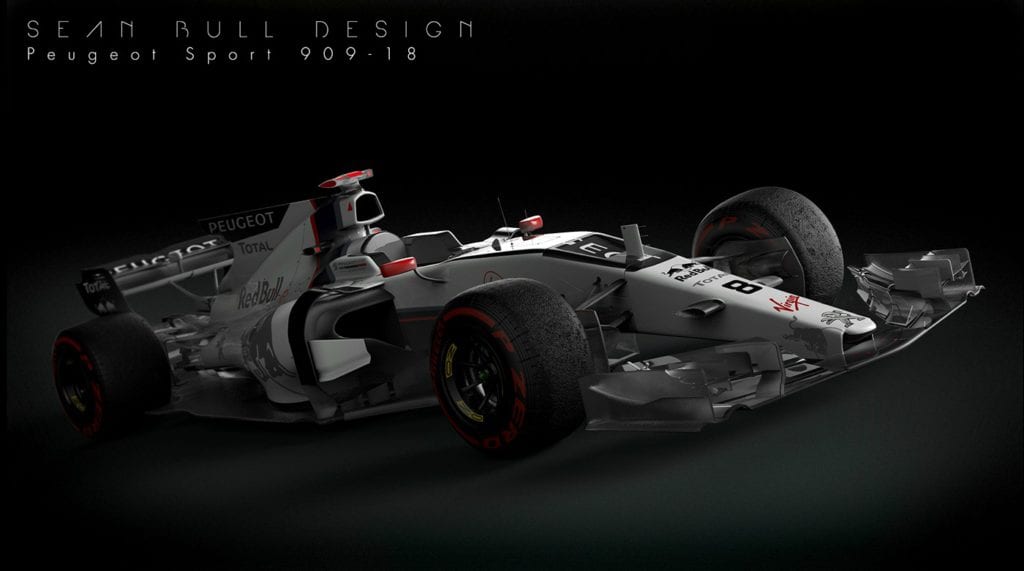