This Double Overtake Shows That Fernando Alonso Is Really Getting The Hang Of Oval Driving – WTF1
Skip to content
×
Formula 1 , Indycar

It didn’t take long for Fernando Alonso to dial into the Indianapolis Motor Speedway during his rookie orientation test. But there’s a world of difference between lapping alone at Indy and running in traffic, as the high speeds and close walls can make things much more complicated.

But in F1 Fernando has never been shy when it comes to dealing with other cars, and the way he effortlessly slices between the Penske’s of Helio Castroneves (In the No.3 car) and Juan Pablo Montoya (No.22) here seems to show he’s carried that attitude with him to Indy. Would we really expect anything less, though?

Coping with other cars is a huge part of the Indy 500, as having to run different lines and deal with dirty air has a dramatic effect on the way the car behaves. Sure, this is only practice, but the more chances Alonso has to do stuff like this the more comfortable he’ll feel when it comes to the crunch. 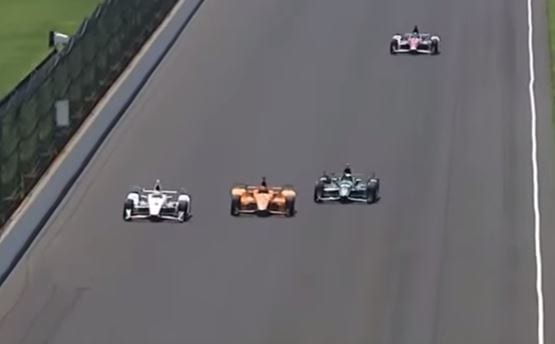