This F1 Fan Shared His Experience Of The Belgian GP

As we reflect on the 2021 Belgian Grand Prix and how it’s now the shortest’ race’ in F1 history, many have sent their thoughts to the fans that stood in the rain for hours to see the events unfold.

Being one of those fans on the ground, Marcos Nanini explains how the weekend was more than just a rain delay. It was a weekend of chaos, and they’re also not alone with these kinds of reports.

This is his story of how he almost saw his first F1 race.

***
Don’t expect to read much about the race itself; firstly, because there wasn’t one, regardless of what the FIA says, and secondly, my intention is to show just how much can go through in any race weekend.

My family gave me tickets to go to this year’s Belgian Grand Prix. It was a dream venue, a dream circuit and the chance to be in real life in a place where I have been countless times on videogames was surely meant to be an unforgettable experience, and oh boy, it was one of them.

The plan was simple: going back and forth from Luxembourg to Trois-Ponts, and then to the circuit during Saturday, getting some rest and dry clothes at my place, and then doing it all over again on Sunday.

I got to Spa-Francorchamps just before midday on Saturday, after some extra walking in the rain required thanks to an unexpected detour on the bus route.

Besides that, everything else was as expected: I got extremely wet and cold watching the action take place from the Kemmel Straight, cheering as everyone did with the amazing lap from George and then watching the Dutch fans roar when Max took pole.

By this time, around 5 pm, I decided to leave, skipping some of the action to get to the train station in time and not missing my last bus home.

Already struggling with my worryingly low phone battery, I had to walk all the way back to Masta through Burnenville. After an extra bus, more walking and a lot more raining, I got to the station earlier than expected, where after a few minutes, a bus arrived at what seemed to be perfect timing for me. To be extra sure, I asked the driver if he was going to Gouvy, the place where I was going to take my train, to which he replied affirmatively, only to let me know about forty minutes and several kilometres in the opposite direction that he was only getting there after going to Liege.

This small omission from his side meant two things: on the one hand, I had missed my only chance to get home that day, and I was stuck with those wet clothes and my phone on a 2% battery.

On the other hand, I needed to somehow find a place to stay, at 10 pm, in an area where every hotel or anything similar was already full due to the Grand Prix. Otherwise, I would probably spend the night sleeping in any place that offered me protection from the rain.

Luckily, I was able to find a hotel with an empty room.

Moving on to Sunday morning, I was ready to go once again. I was walking from Stavelot to the Blanchimont entrance, where everything had become an absolute mud-fest. Even those of you who were not there during the weekend can imagine the conditions in which my clothes and everyone else’s were after walking on a rain-soaked circuit for all those hours.

Then came the main event. The moment that would make all the cold and bad luck seem tiny compared to the opportunity to witness an F1 race at Spa Francorchamps during a rainy weekend, which has to be the dream scenario for many of us fans.

Little mattered that it had started to rain once again. It was all about finding a good spot in the Kemmel straight again and fighting off the cold during the two hours that were still left until the scheduled race start.

And then it got postponed for ten minutes. Then five more. Then an extra five. And so on.

Don’t get me wrong, not racing was the right choice given the conditions. Still, for all of us who were there and receiving that news, it would have been so much better for it to be cancelled altogether rather than receiving these false expectations about it perhaps taking place.

At the end of the day, I was not going to give up so easily on my dream of watching my very first F1 race even if the conditions were getting worse by the minute (at this point, some random guy jokingly asked me if I was doing the electric boogaloo because of the way I was shaking, which I find hilariously accurate).

But there would not be any redemption or accomplishment; it wasn’t just meant to be this weekend for me. By the time it was 5 pm, I knew I had to leave; otherwise, I would be exposing myself to going through the same as the night prior all over again, the difference being that I now would be late for my job.

With the bus schedules being even less frequent on a Sunday, I had to do some more running in my cold, wet, blistered and extremely tired feet, although now it was all over.

There was only time for me to hear in the distance what ended up being the only couple of laps that F1 technically raced during this weekend, although it is safe to say I didn’t miss much. Even the rain stopped, but that was only when I managed to get back to Luxembourg at around 11 pm.

As I said before, my intention is to show all the things that can happen in the background of any race, especially with F1, even more so when the conditions are not optimal, as we love to see when we are separated from the action by a screen.

About the F1 itself, there is no love lost for me; I will still do my best not to miss any race, even more so with the incredible championship fight that we are having.

Who knows? Maybe someday, I will finally be able to a race live. Until then, I will keep having the same enthusiasm as that four-year-old boy who fell in love with this sport all those years ago.

On a final note, I would like to thank every person that helped me because, with their gestures, they really made me get through it and gave me what will certainly become a great anecdote in years to come. 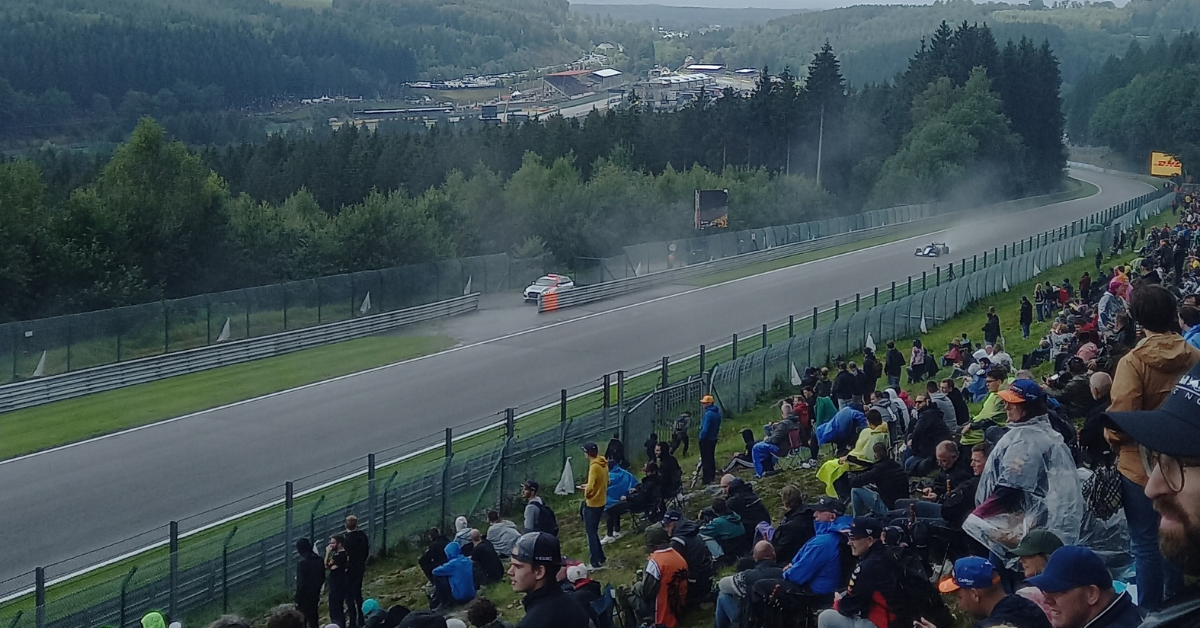