This GT Driver Crashed Heavily At 130R Yet Still Managed To Drive Back To The Pits – WTF1
Skip to content
×
Crash , GT

No driver ever wants to crash anywhere, but when it comes to corners where you really don’t want to have an accident, Suzuka’s 130R must be somewhere right at the top of the list.

Unfortunately for Cassidy, that’s exactly what happened when he spun on the way into the corner and ended up hitting the barriers head first.

More hits than elvis today. Hit by an AM I was lapping and paid for it later. Can’t wait to get back to Super Formula and Super GT. pic.twitter.com/i8cz3C6lsk

Thankfully Cassidy was OK, but the car? After being stuffed into the barriers at one of the world’s fastest corners, that would surely be race over, right?

Nope! Thanks to the use of air barriers on the outside of the corner (as well as the tarmac runoff allowing Cassidy to scrub off enough speed), he discovered the damage was light enough to enable him to drive it back to the pits.

No, your eyes do not deceive you: @NickCassidy_ is driving HubAuto's @FerrariRaces back to the pits!

After extensive repairs, the car (which Cassidy was sharing with Nick Foster and former F1 driver Heikki Kovalainen) was able to return to the track, albeit many, many laps down.

The race was won by the WRT Audi squad of Kelvin van der Linde, Dries Vanthoor, and Frederic Vervisch. 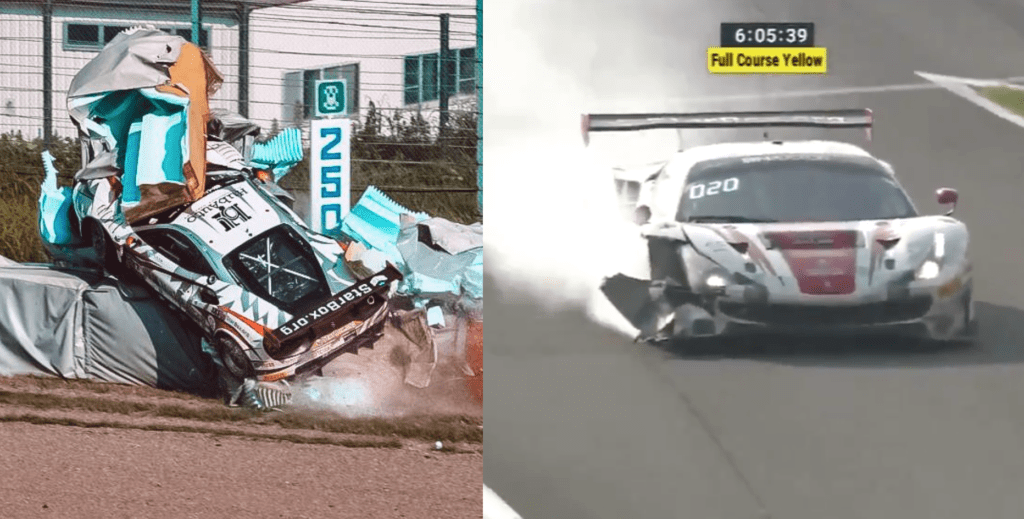